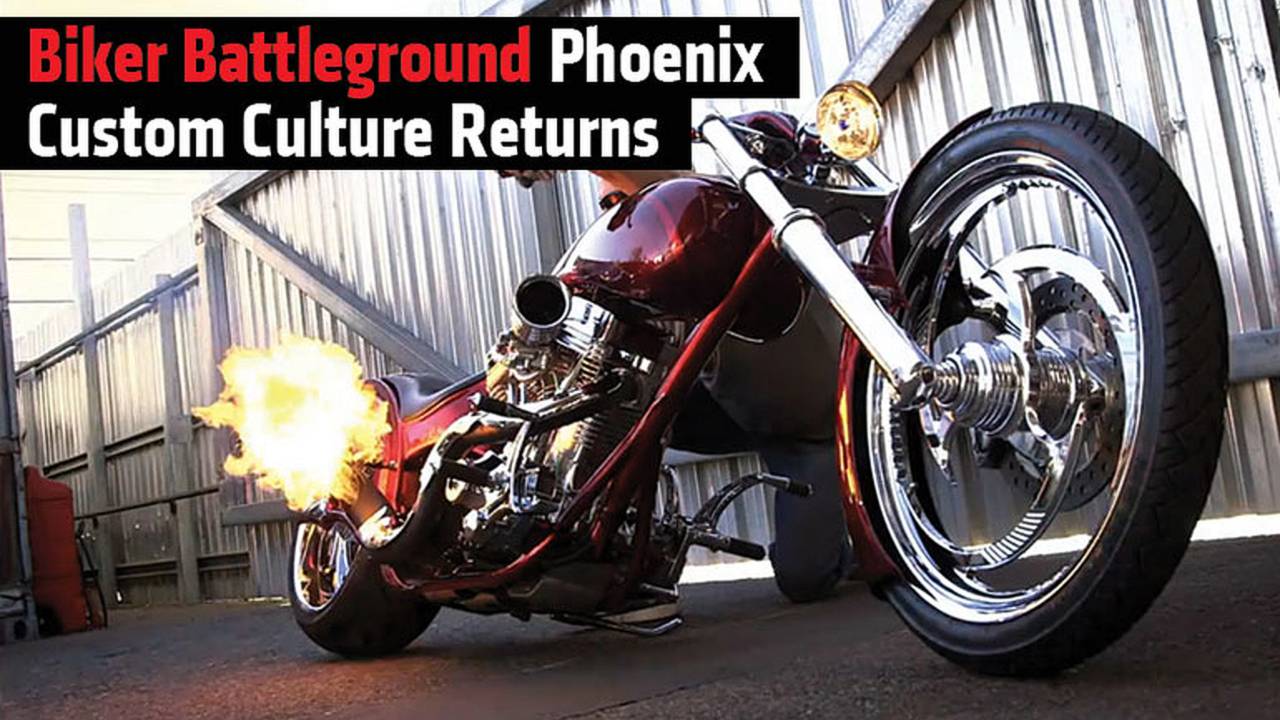 Craftmanship makes for fascinating viewing. One of my favorite “reality” competition shows (we’ll get to the quotes in a minute, for they do have a bearing on Biker Battleground Phoenix ) was Top Chef Masters. I liked it more than the original version of the show, because the Masters version featured chefs that were arguably at the top of the cooking pyramid – people like Rick Bayless, John Besh and Hubert Keller who are living legends in the world of modern cooking, and who treated each other on the show with the according amount of respect. The show was refreshingly ego-free, and the focus was on the craftsmanship. When you’re truly at the top of your game, there’s no competition – and there’s no insecurity.

Biker Battleground Phoenix, the new “reality” competition show from The History Channel, starts off promisingly – if a bit clichéd. The grim voice of narrator Gregg Berger (sounding as if he’s auditioning to be the next “In A World…” Guy from every trailer for every Michael Bay movie ever made) informs the viewer that the custom bike building industry is worth $8 billion a year, and that its epicenter is Phoenix, Arizona, “the bike building capital of the world”. I didn’t have time to fact-check these claims; right away, the focus shifts to custom bike “legend” Paul Yaffe. (I’m a noob rider, so I’ll leave to commenters to tell me if his “legend” status is true.) And this is where the show’s problems begin.

Yaffe is one of five bike builders featured on the show, and he’s positioned as the big dog on the block. We’re told that Yaffe’s shop, Paul Yaffe Originals, grosses some $15 million a year, and that he’s got a big bullseye on his back, put there by every other bike builder in Phoenix. Yaffe seems to believe this, at least; when we meet him, he’s on a bit of a rampage, seething over a rival producer’s pipe design that he believes was ripped off. He berates his crew, and goes through his shop pointing out various ways that rivals could steal his designs.

The show, of course, lines up his rivals and paints them accordingly: the Former-Yaffe-Student-Who-Betrayed-His-Mentor (John Shope, the trash-talking owner of Dirty Bird Concepts), the True Craftsman Who Refuses To Sell Out (Brian Jenkins, owner of Hatred Customs – we’re told that his shop name was inspired by his feelings towards Shope), the New Kid In The Biz (Kody McNew, owner of Voodoo Bikeworks, and yes, the rookie builder’s last name is McNew), and The Outsider (multi-millionaire and Canadian Len Edmondson, owner of Azzkikr Customs). For much of the show, we’re treated – if that’s the right word – to segments of each builder boasting about their own greatness and denigrating the others’ work. The nadir: a sequence in which Shope texts Yaffe a pic of a Yaffe bike that a client has asked Shope to rebuild, followed by a text fight that would not seem out of place on a high school cheerleading squad, followed by Shope riding the finished bike over to Yaffe’s shop to further needle Yaffe.

The titular “battleground” references the competition that the show will presumably be built around. The “reality” comes in the form of Yaffe’s idea: he gathers all five builders at a biker bar proposes that all five builders each create a custom bike, from a stock bike, with “closed-door” rules – owner built-only, with only the materials that their shops have on hand. We’re meant to think that this was all Yaffe’s plan, but the setup and execution seem totally contrived. (Unless viewers believe that multiple cameras just happened to be at Yaffe’s shop when the Great Competition Idea Light Bulb came on over his head.)

And what of the bikes? Sadly, they’re pushed to the back of the Ego Battle Garage. There’s no doubt that each of these builders are very, very good at what they do – Jenkins, in particular, sees himself as an artist and prides himself on fabricating as much as he can by hand and salvaging parts from local wrecking yards. And what little we see of the bikes shows some real creativity on the part of all of the builders (well, most of them – we don’t get to see much of Edmondson’s work, and accusations that McNew doesn’t do any of the work himself spring up from a couple of the other builders).

But the show isn’t about the bikes, or riding, or even about the custom bike building industry. It’s yet another in a neverending parade of manufactured docu-drama shows. Which is too bad, because lost in the chest-puffing and smack-talking is the fact that these guys are craftsmen, building machines that are beautiful and functional. Instead, we’re treated to more stereotypical treatment of bikers, which begs two questions: are TV producers ever going to get the world of custom bike-building right? And is American Chopper still on?