What Ducati’s aluminum beam GP frame means for the 1199

Imagine a production bike — more powerful than any v-twin before — benefiting from the recognition of Italy’s most popular sportsbike brand and also the star power of MotoGP’s most famous rider, a rider that just happens to be Italian. Imagine also that that rider was winning races, maybe even a championship, on a machine with a clear point of unprecedented mechanical distinction shared by...

Imagine a production bike — more powerful than any v-twin before — benefiting from the recognition of Italy’s most popular sportsbike brand and also the star power of MotoGP’s most famous rider, a rider that just happens to be Italian. Imagine also that that rider was winning races, maybe even a championship, on a machine with a clear point of unprecedented mechanical distinction shared by said production bike. Sounds like a perfect storm to create high sportsbike sales, right? That must have been what Ducati was thinking while it was developing the 1199. They’d give it a similar “frameless” chassis to their GP bike, then hire Valentino Rossi to put that GP bike on the podium. Race success + clear connection to race bike + impressive specs + famous dude = winning.

But, reality hasn’t cooperated. Rossi isn’t winning and he’s blaming that failure, at least partially, on that funny frame configuration. Now, Ducati is developing a — gasp — twin-spar aluminum beam chassis to see if it can fix the GP11’s handling problems. What does that mean for the “frameless” Ducati 1199?

Well, it’s not so much frameless as it is two subframes on the front and back of the motor instead of one frame connecting the forks to the swingarm pivot. The swingarm actually hinges on the motor case and a dinky rear subframe supports the rider, while a front subframe holds on the forks and whatnot. Michael Czysz perfected the use of a stressed carbon airbox as that front subframe on his stillborn C1 GP bike and Ducati’s been using it on its MotoGP bikes since 2009. 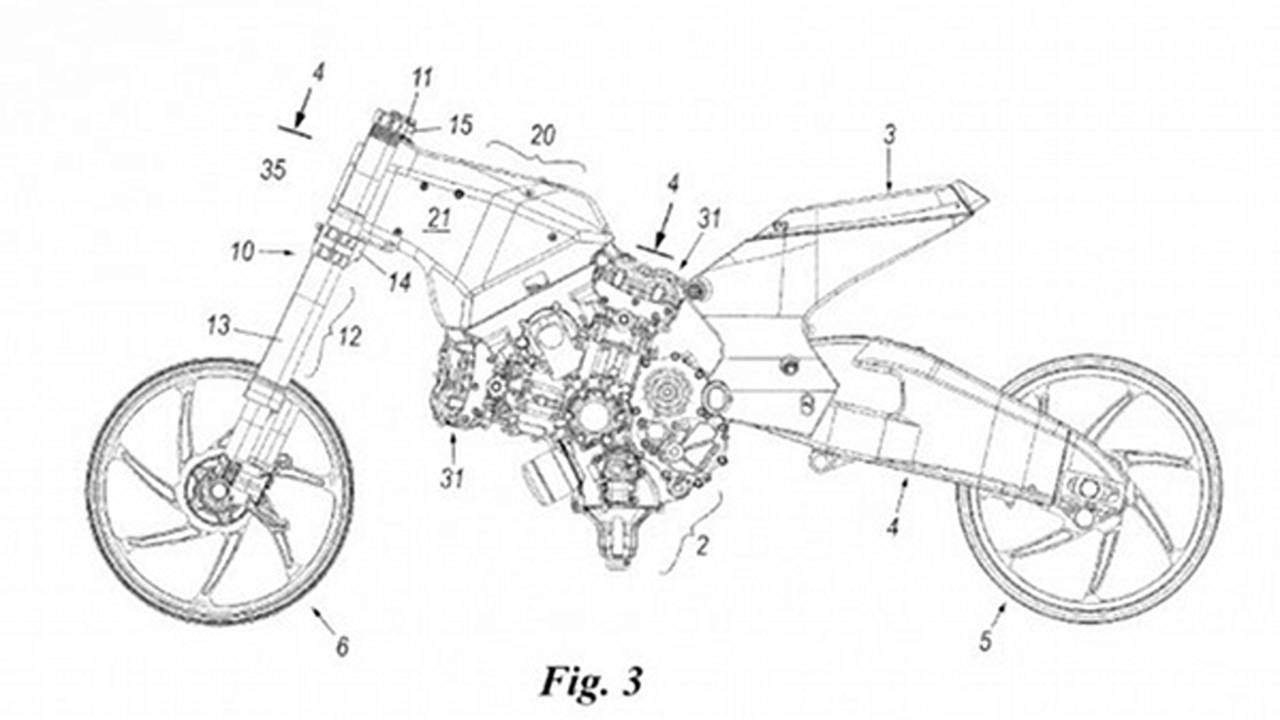 This patent sketch gives you a clear idea of the chassis configuration. Front and rear subframes, and a stressed engine, replace the need for a traditional frame.

The Ducati 1199 hasn’t been released yet, but leaked and spy photos strongly indicate that it uses a similar arrangement. We’re making an educated guess that, for reasons of production cost, that stressed airbox and rear subframe will be aluminum, not carbon though.

Ducati can be first to production with a “frameless” chassis not just because of its experience developing one for MotoGP, but because it uses a v-twin engine configuration. With all their big metal bits at the front, inline fours would simply require too long of a rear subframe to make “frameless” make sense, but with that rear cylinder crammed up under the riders’ nuts, Ducati can get away with a very short rear subframe. 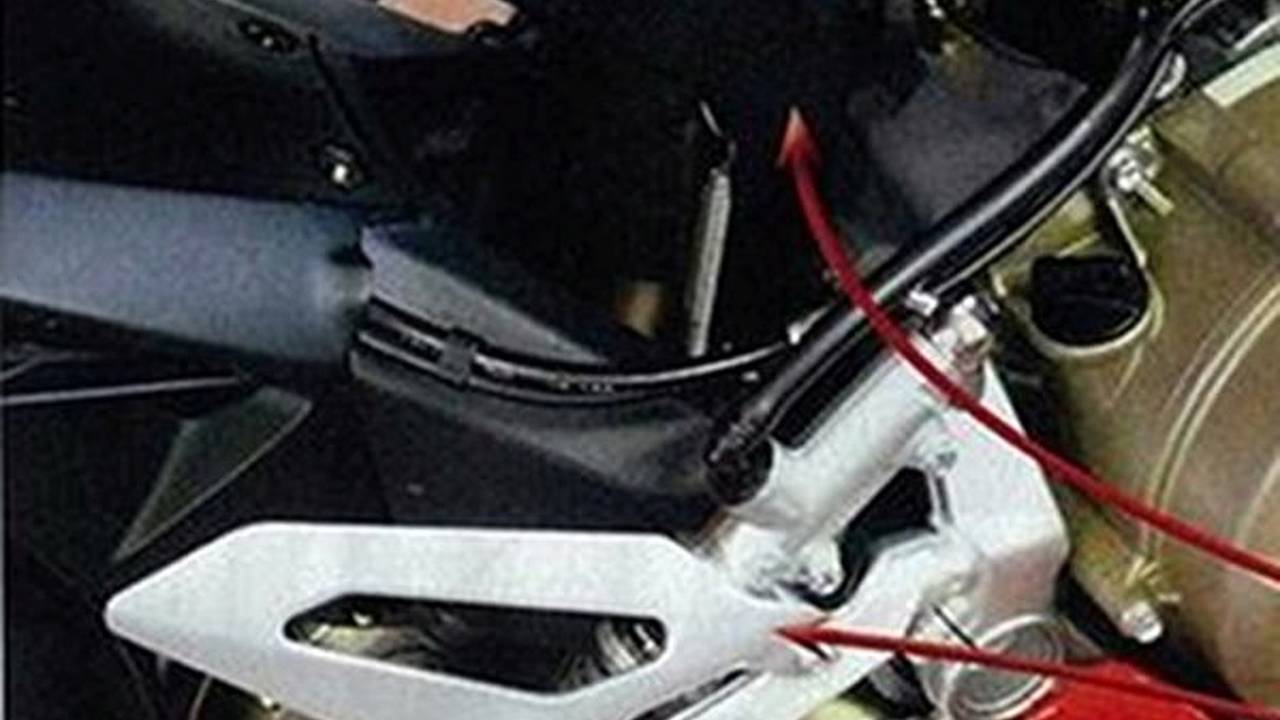 Do you see a frame for the SSA to pivot on in this leaked image of the 1199?

Advantages of “frameless” are part count reductions and therefore weight loss. The engine is also the frame; the airbox is also the front subframe, etc. Disadvantages are the ability of the engine to support the weight and torsional flexing, so the motor has to be developed to work with “frameless” from the off and the mysterious issue of “feel.”

What makes a Ducati? Belt-driven cams? A steel trellis frame? A high, narrow, rectangular tank? The 1199 has none of that. So what sets it apart from other exotic bikes other than red paint and its “Ducati” badge?

916-alike headlights are likely the only connection between the 1199 and Ducatis of yore.

It’s certainly not the only exotic superbike to use a v-twin. In fact, the engine looks extraordinarily similar to the KTM RC8’s and likely shares its chain/gear driven cams. So that’s not a clear point of mechanical distinction.

It also won’t be the most powerful superbike out there, the Kawasaki ZX-10R is likely to retain that distinction.

The 1199 is expected to come with the full host of performance-enhancing electronics (at least it needs to if it wants to be competitive) — traction control, wheelie control, launch control — but none of that is new and Ducati likely can’t top APRC’s flawless execution, only hope to match it.

It also won’t have any world championships under its belt. Even if the 1198 sews up that honor this year in SBK, that’s a very different bike to the 1199.

Instead of all that, Ducati is looking to re-write its own history with an epic, but unsuccessful attempt at dominating MotoGP combined with pretty impressive mechanical specifications for the new bike. They didn’t just hire Rossi, but also Nicky Hayden, the latter to ensure penetration of the lucrative North American market. But, instead of race track success, they’re suffering very public race track failure, with blame being lumped on that connection between the GP bike and the 1199 — the frameless chassis.

The deal with the GP12 and its aluminum chassis.

Such is the lack of confidence in the frameless configuration and its purported lack of front end feel, that Ducati has done the unthinkable and begun developing an aluminum twin-spar chassis in a parallel program to the regular GP12 development. Not only is the approach almost heretical in its similarity to the Japanese performance bike archetype, but it comes at a time in which massive development effort needs to be put into an all-new, 1,000cc engine. 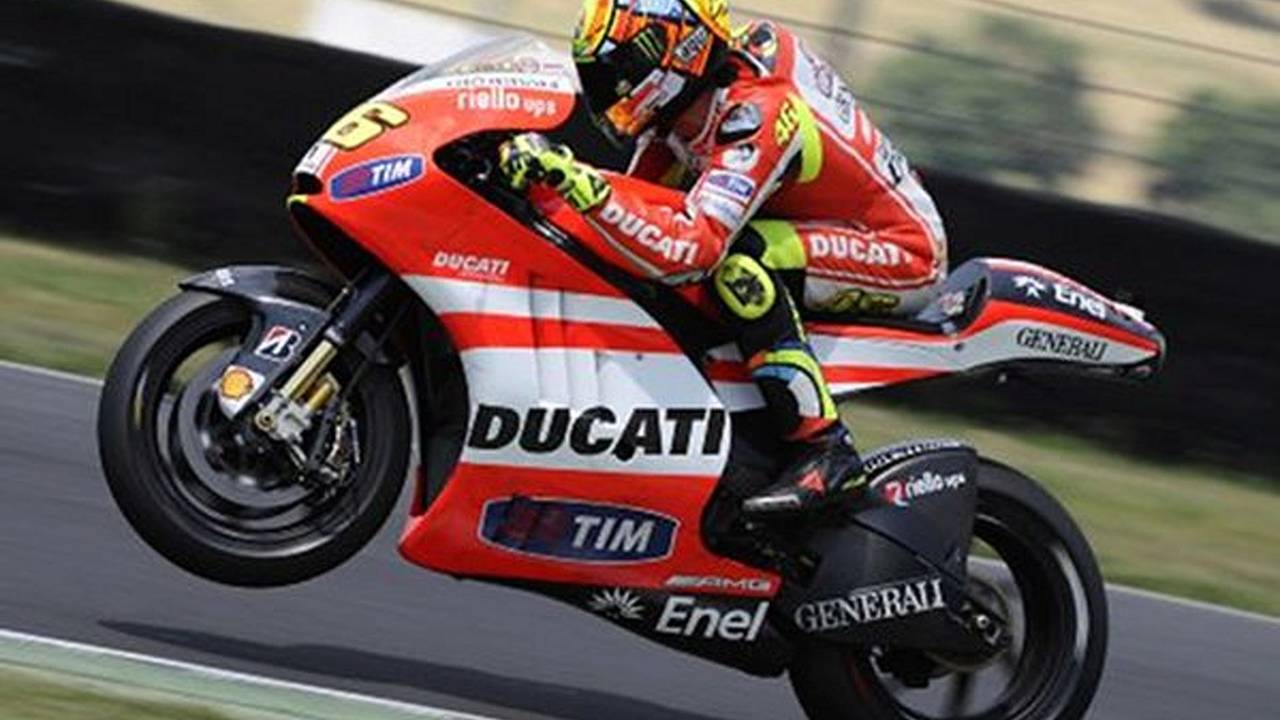 Compare this shot of the frameless GP11 to the shot of the framed GP12 prototype at the top of the article. Up top, you can clearly see a traditional swingarm pivot plate. Yep, that's a hallmark of an aluminum twin spar.

It’s not clear yet if Ducati will switch its race bikes from framless to aluminum frame, but if it does, it won’t be doing so for reasons of clear technical advantage. No, the selling point of aluminum twin spar isn’t weight or stiffness or anything quantifiable like that, it’s the experience engineers and riders have with the platform, which should help them dial it in to the nth degree that much better and quicker. Perhaps tellingly, tests this weekend at Mugello of both configurations couldn’t produce a lap time that could match Casey Stoner’s aboard a Honda. 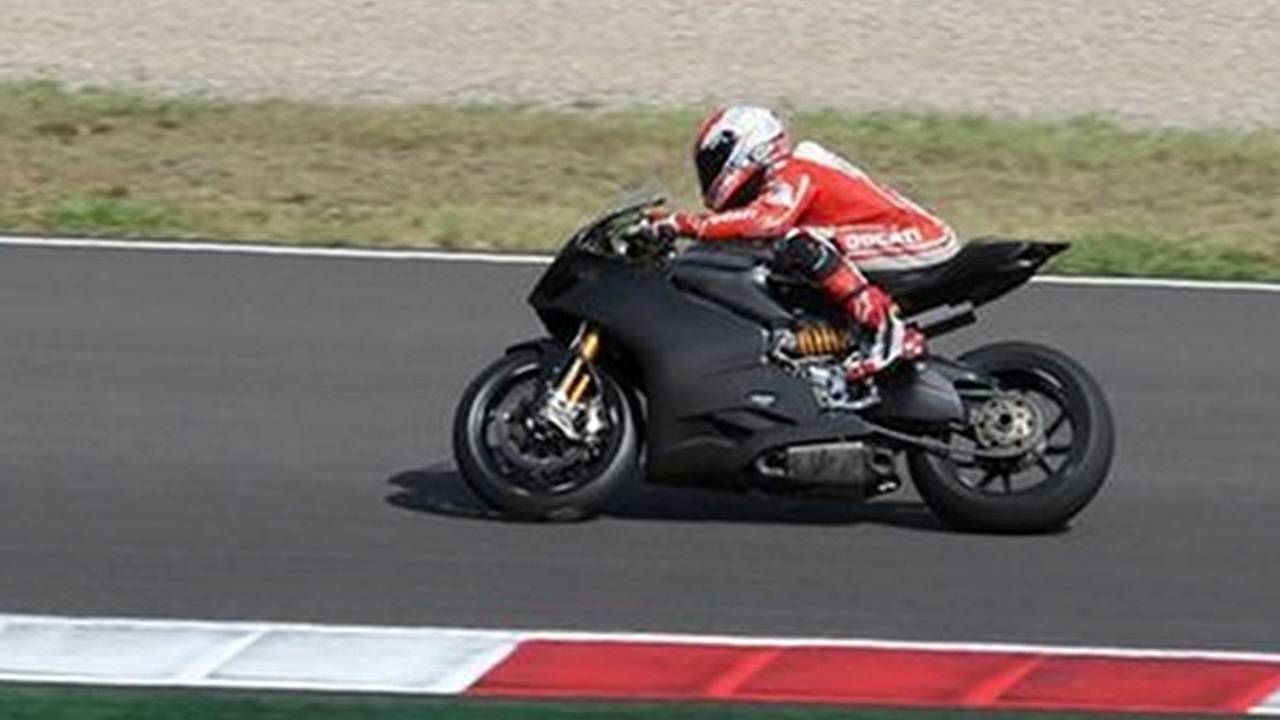 The latest spy photo shows the 1199 on track wearing SBK-spec suspension. Will Ducati re-enter the series?

Anecdotal evidence relayed to us by professional dealers of Italian motorcycles is that sales of bikes in the 1199’s competitive set are way down this summer in anticipation of the new model. This includes Ducati’s own 1198 — despite it gaining a bunch of no-cost upgrades like forged wheels, a slipper clutch, aluminum tank, etc, all in an effort to boost sales during this anticipatory period — the Aprilia RSV4 and even MV Agusta F4. Buyers have also related to us that they’ve passed on bikes like the BMW S1000RR and 2011 Kawasaki ZX-10R, instead saving their money to put a deposit down on the 1199 this fall.

This is indicative of how well that Rossi + MotoGP connection + anticipated spec worked even before Ducati began officially pushing such a marketing platform. Those three factors are such a strong combination that Ducati doesn’t need to do anything and buyers will still be knocking down doors to place a deposit.

That connection is powerful. Powerful enough to impact sales should it work against Ducati? 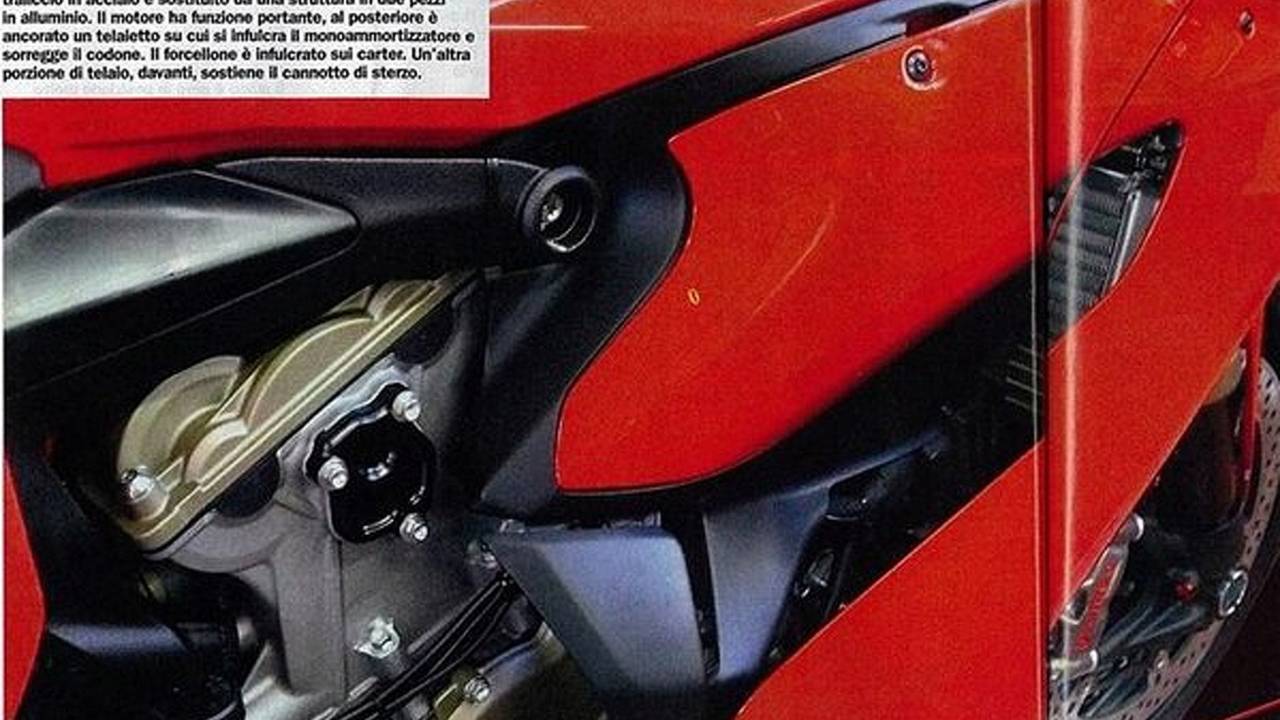 Is that the rear subframe mounting to the rear cylinder in this leaked shot of the 1199?

Regardless of which occurs, Ducati is coming to market with a seriously fast (190bhp?), seriously light (under 400lbs wet?), seriously awesome motorcycle that’ll likely sew up sales in its traditional rich guy market. But that’s not the question here. What’s being questioned is the 1199’s ability to follow through on its promise of conquesting sales from other manufacturers in a big way.

Given scenario one, they’ll all of a sudden be selling a bike to the public with no tangible connection to their MotoGP racer. This move will also be a clear indictment of the frameless configuration, at least in the minds of the public. Motorcyclists are a traditionally conservative, fickle bunch. Motorcycles that have tried to break the traditional sportsbike archetype have traditionally been enormous sales flops. Witness the Yamaha GTS1000 and its Omega frame.

Scenario two? Major win. Everything continues as planned, Ducati takes over the world and Jeremy Burgess is elected prime minister of Australia.

Scenario three? Epic fail. Instead of getting a major TV ad in its favor every other weekend next summer, the 1199 is going to get a major tv ad that's negative. If you were a big MotoGP fan and you kept reading on MotoMatters and watching on television criticisms by your god-on-earth hero, Valentino Rossi, of the frameless configuration, would you be excited about spending your hard earned on something similar? Would you, say, promptly run out and trade in your S1000RR for one? You probably would in scenario two, but not if this happened. And that’s the problem, that’s what the 1199 is designed to make you want to do. Without a clear connection to Rossi’s race track success, it probably can’t.