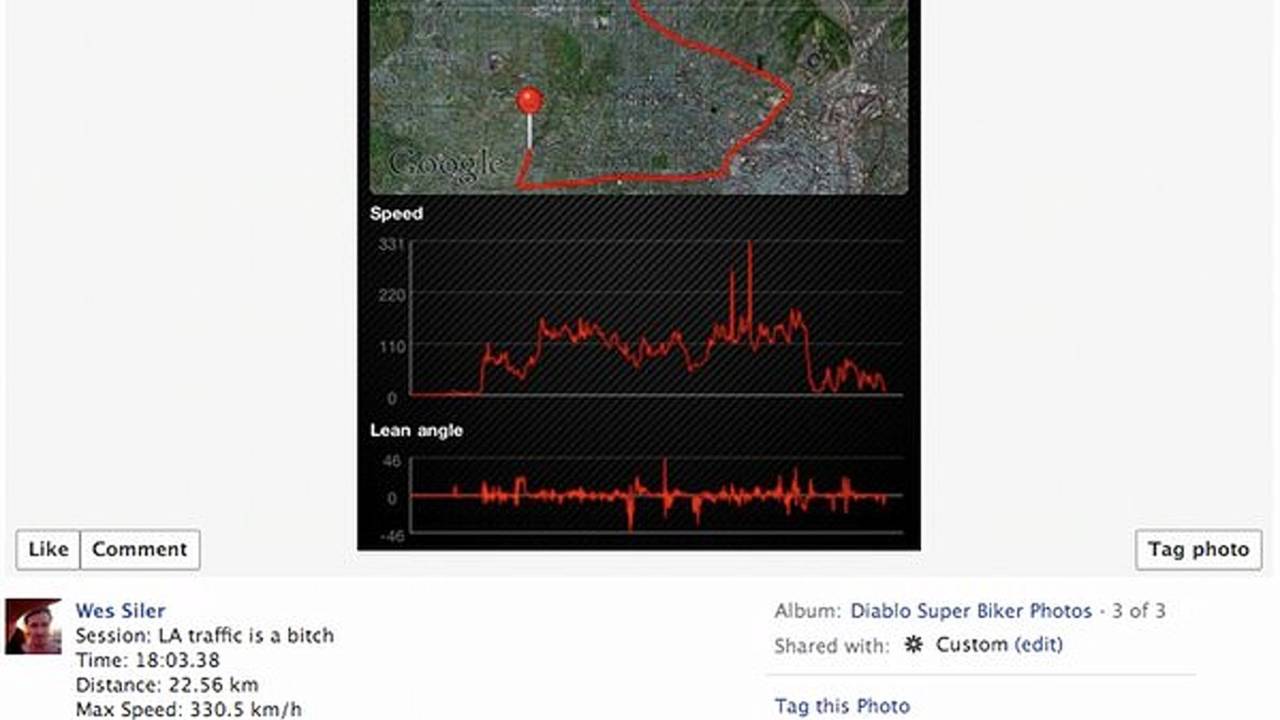 Pirelli’s new Diablo Super Biker app promises to give bikers a free tool to track ride routes, speeds, lap times and even lean angles, then share all that data on Facebook. Sounds great, but can it do what it says on the virtual tin? Last night, I fired up the Triumph Daytona 675R, made LA’s best taco truck a stop on the route to my girlfriend’s house and tested the app along the way. With a...

Pirelli’s new Diablo Super Biker app promises to give bikers a free tool to track ride routes, speeds, lap times and even lean angles, then share all that data on Facebook. Sounds great, but can it do what it says on the virtual tin? Last night, I fired up the Triumph Daytona 675R, made LA’s best taco truck a stop on the route to my girlfriend’s house and tested the app along the way. With a measured top speed in excess of 205mph and a max lean angle of 46.2°, I’m considering a new career as a taco delivery guy. Delivered ahead of time or your money back, guaranteed.

Released in America earlier this week, the app overlays existing tracking functionality with a bike-specific interface and branded sharing tools. Tracking your routes via GPS, extrapolating speed data and measuring lean angles using the phone’s accelerometer are nothing new, but doing so in a slick, easily sharable package is. Immediately following my delivery, I was able to upload a synopsis of my route to Facebook — including a map, max speed, average speed, elapsed time, total distance, max lean angle, bike and tires — with one click. On my phone, I can scroll through the data via the speeds and angles or using a full-screen map. The latter is particularly useful in tracking performance in a given corner.

The price you pay to have all this for free? The app itself is obviously heavily branded, but so is the data posted on Facebook. It automatically uploads the routes as photos to an album inalterably titled “Diablo Super Biker Photos” which makes them sound a little like a video game. Obviously developed in Europe, where it was released last month, data is also recorded using the metric system.

Known for its Tacos al Pastor — marinated pork cooked on a vertical, Shawarma-style spit — Tacos Leo is a perfect representation of an LA food truck. It’s located on La Brea and Venice and attracts a predominately Mexican and African American audience. The presence of a brand new, Ohlins-equipped 675R raises eyebrows and leads to a lot of questions. The food is outstanding — fresh, tasty and made from quality cuts of meat — yet impossibly affordable — just $1 a taco.

Eight al Pastor and the requisite condiments loaded into my Kriega R35 backpack, I turned the app on, locked my phone and stored it in the bag’s mesh top pocket, where I figured it would get the best GPS reception. That pocket is also flat across the top of the bag, something I was hoping would contribute to better lean angle data. Then, bag on, helmet on, gloves on, bike on, past all the kids and out onto the road. Despite receiving a “hurry up” text en route, the app kept recording.

But, that process is indicative of the app’s first drawback. If you’re measuring average time and extrapolating average speed from that, then a few minutes on either side spent adding and removing gloves and stowing/unstowing the phone is going to compromise the data you’re gathering. You could never expect totally accurate lap times from the app, seconds on either end spent de-gloving would knock you all the way from MotoGP to Moto3.

Then there’s the question of the data actually collected. With a 675R to use, I am a pretty handy taco delivery guy, but not 205mph or 46 degrees of lean handy. At least not without my custom Icon taco delivery suit that is. I looked, but couldn’t see a turbocharger anywhere on the otherwise 124bhp engine. And, while the Diablo SC2s grip like little else and the Ohlins NIX30 forks and TTX36 shock are surprisingly compliant through the broken concrete of the 110-to-101N ramp, there’s no way I could achieve 46+ degrees of lean there, the surface is just too damn broken.

Accelerometer-derived lean angle data is also questionable, it extrapolates G forces rather than measuring actual lean. No instructions are provided as to where to locate the phone; did sticking in my backpack make it subject to a body more upright than bike?

There’s also the question of achieving the optimal heat-preserving delivery time to wind chill ratio. I determined that staying below about 140mph wouldn’t unduly cool my tacos before consumption, where a 205mph breeze could have led to an unnecessary degree of evaporative cooling through the single layer of tinfoil separating taco tastiness from the gelatinous disappointment of tepid tacos.

The app’s sharing function is also somewhat limited. The maps upload as images, not links to scrollable, zoomable Google Maps, limiting their usefulness, and the only social media channel available is Facebook. What if I want to share my terrific tacos on Twitter?

As a free toy, there’s nothing wrong with Pirelli Diablo Super Biker, but it doesn’t offer anything like the functionality of our favorite route tracking app, Motion X GPS, which exports its recordings in Google Maps, enabling us to embed them right into articles or to mine for further data. It’s a good little marketing exercise, but will do little to offer riders value beyond the novelty of the first couple uses.