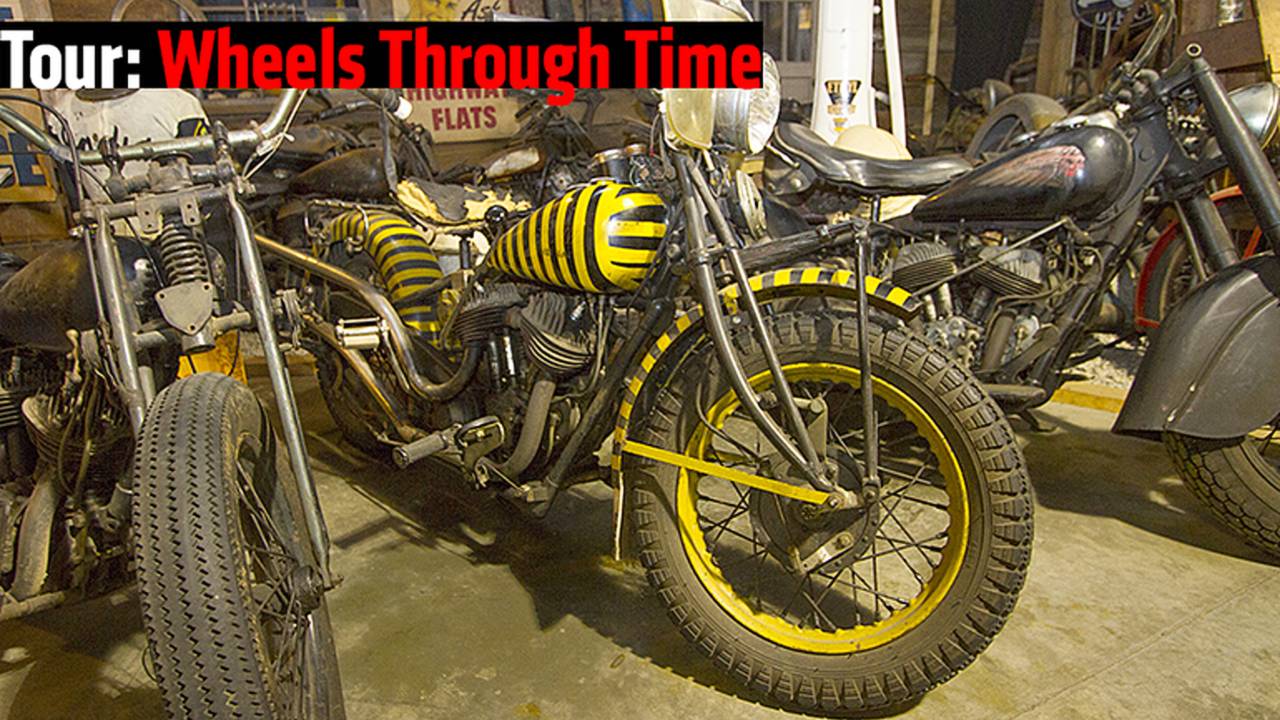 Wheels Through Time Museum Tour Face it, motorcycle reality shows are often unbearable to watch, usually loaded with made up drama, all following the...

Face it, motorcycle reality shows are often unbearable to watch, usually loaded with made up drama, all following the same script: one of the "mechanics" starts by stating the obvious and then some negotiation or deal is made that would never happen in real life.

Throw in a lot of yelling, some bleeped out "swearing", phony tire screeching and a tacky, overpriced bagger build and you've got yourself a biker show that every Midwestern biker family will idealize. T-shirts, hats, mugs, dinner plates, follow as these types of TV shows often have more merchandizing than a Harley dealership.

I've experienced both inside and outside of production for reality motorcycle and car shows and it's often Hollywood’s dorky producers that are to blame for over the top packaging that's targeted toward the mass cable TV audience--real enthusiast need not apply. That’s not to say all these shows are bad, sometimes, usually when a blue moon rolls on by, the talent on these shows are the real deal and not the cheesy versions of themselves being portrayed on TV, but that’s few and far between.

What's in the Barn, now in its second season, is a show on the Velocity network.  The premise is simple: Dale Walksler and his son Matt venture around looking for vintage motorcycles to restore, the catch is, they actually ride them.

Father and son own and operate Wheels Through Time Museum in Maggie Valley, North Carolina. Despite all the Hollywood trappings and fabricated drama, Dale and Matt are the real deal.

"I've been making videos for seven years," said Dale. He's not talking about TV shows, but an informative, vintage motorcycle online series called, Time Machine.  "People give us a hard time for being scripted and what-not , but if you want the real thing, look at the videos online."

This is a collection of parts, bikes, engines and motorcycles that exceeds any personal collection, abandoned barn or a manufacturer's own museum of bikes. A gigantic garage filled with real, useable items. This is one of the biggest and well-constructed motorcycle museums we've ever been to. It’s amazing.

Dale was a Harley dealer well before opening up his shop, so, for better or for worse, most of his museum is made up of vintage Harleys. Although it’s not exclusively Harley stuff, Dale has been collecting from almost every genre before 1985 with few exceptions. Around the turn of the 20th century, there were roughly 100 American motorcycle companies in existence.  Now, sadly, we’re down to a handful.

Back then there was Thor, Vincent, Excelsior and Wheels Through Time has at least two of each.

The museum is a gold mine with more complete vintage American engines in one building than I've ever seen in one place before and, the best part: no cheesy displays. Walking through you can envision Dale or Matt stepping over displays, digging through parts to use on their current projects.

One of my favorite non-cheesy displays featured military bikes including opposed-cylinder, driveshaft Harley-Davidson XA’s, built for WWII, which are complete rip offs of the BMW R75 and R12 models of the era.

If you keep walking through the museum, you come across my personal favorite section, choppers. Inside are raked and stretched beasts covered in extra-long springer front ends with Bondo-molded gas tanks, hub caps hanging from the ceilings and all over the floor, piles of weirdo parts.  Front and center, there she stood, one of my most favorite builds - the custom Indian Matt built as an invented builder for Born Free 6.

Seriously, Dale and Matt have a legitimate pile of parts, in fact, the best in the South. They’re accessible parts used for ongoing projects, all original, all vintage as there’s nothing fake going on here.

"What's old school? Trying to build something it's not. Real School, we build things in vintage fashion with vintage parts."

I met Dale at the doorway to the museum, just him and his hound dogs, sprawled out in a sidecar out front of the building.

Dale had just returned from the AMA Vintage Motorcycle Days. Speaking faster than an auctioneer, he led us inside to show me one of the best executions of Real School he believe he’d ever built: A 1936 Knuckle head Harley-Davidson with double adjustable spring front end, using a WLA WWII headlight mount that allowed for double adjustable front springs.

Everything on the bike is period correct except the tank and custom Rinehart Racing exhaust built by Gerald Rinehart himself.

"I just drop off a bike at his house and he calls me a couple days later to pick it up," said Dale. If only life was so easy.

Before he finished his sentence, we were in a steady trot heading back to the garage where the shop builds most of the bikes in the collection, along with personal projects and some customer bikes.

Dale's obviously excited and appreciative of his fame. As he walked the halls of his museum, the crowd parted, cameras flashed and fans started blurting out anything they could to Dale, just so they could go home and tell their friends they spoke to him.

Dale, every generous with his time would stop for a moment to talk about hound dogs or a particular motorcycle, all without slowing down his fast paced gait.

"Thanks for having us to your museum," said a nice couple from out of state.

"Well, if it weren't for you I wouldn't have this place," Dale replied with a big grin.

Dale and I kept on walking - past the 50-foot-high mini-mountain of dirt where he had 20 vintage hill-climb bikes displayed, rattling off the number of rare bikes he owned, including two numbers-matching 1 of 50 factory Indian hill climb bikes from the 1920s.

A step away from the "employees only" entrance to the garage, he stopped to answer a question. Within seconds, eight people gathered around, taking photos and loudly laughing at everything he said.

Dale hopes to restore one bike a month, but says he has a hard time finding people, "with the W gene. You know, the work gene."

On the main lift sat a 1947 Harley he's building for his long time friend and member of the museum’s board of directors, Bob White. Behind White’s ’47 sat two 1938 Harley-Davidsons - one an original race bike - and one of the very first Harley-Davidson single-cylinder Peashooters.

As he stood there filtering through boxes of AMA Vintage Days swap-meet finds, a small shed was slowly into rolled the garage. A vintage 1914 motorcycle storage unit that Dale plans on fixing up to keep his knucklehead giveaway bikes stored in.

As I was parting, Dale said he was behind schedule on restoring bikes as well as taping his own personal online shows.

"If I were to do a show, I would have all my parts laid out and we would start it and then actually finish it in one video," said Dale who doesn't want to make videos that just bits of info with no ending. “One of our shows we did a tune up on a Crocker by first running it though the mountains and came back with weeds sticking out of it."

Dale is a real rider, he fixes bikes to ride, not just showoff, it’s in his blood, What's in the Barn is his way of life and Hollywood, thankfully, can’t take that away from him.