Why the Kymco People GT300i is better than its name 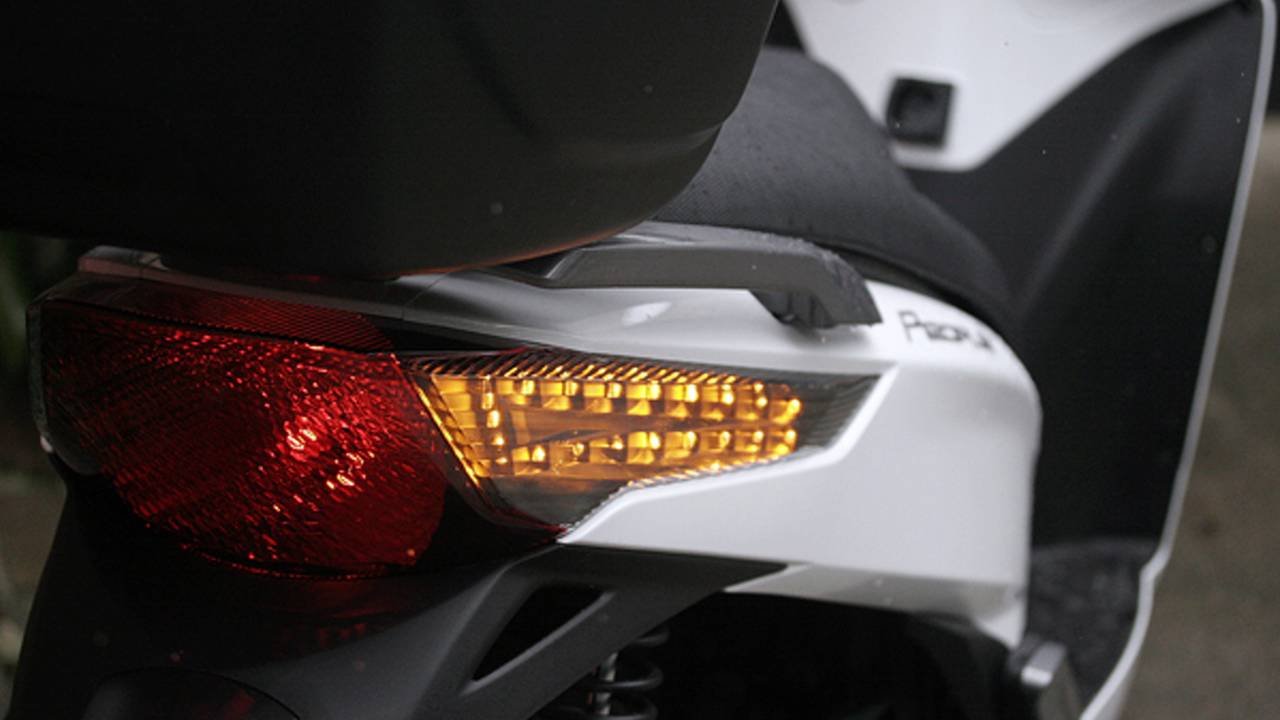 On first impression, the chrome 'People' emblazoned above the rear wheel of this scooter made me cringe. The way typographic information is arranged on the bike and the dash gives the distinct impression that the designer might not have had a firm grasp of how English words and letters are typically used. Of course, this doesn't affect the functionality at all, and after riding the Kymco People GT300i, I wouldn't let it be a make or break factor in purchasing. Larger than traditional scooters, but not quite maxi-scooter sized, the People sets itself apart from the crowd with 16" wheels and enough thrust from 0-40 mph to easily out-run traffic and keep things entertaining.

Once you get past the badging, the styling isn't bad.

Available colors are tasteful (especially black), the plastics are clean and simple and the radiator mounts down low and out of the way where it would be on a motorcycle. Front turn signals are integrated vespa style, and the trick looking LEDs mirror the passenger grab rail.

16" wheels are big for a scooter and the effect they have on handling is profound. Steering is still incredibly light, but the stability they add gives you the confidence to rail through corners in much the same way you would on a pre-08 Ninja 250 (which has the same size wheels and tires). While 16" wheels are great, they're not worth much if the suspension or geometry is wrong. Luckily, it's not. Many of the scooters I've ridden have had quirks that drew my attention — jacking under acceleration, un-balanced damping, too-soft springs, or harsh bottoming. Accelerate, brake, corner, blast over wet coblestones, and the People just gets the job done, and does it without bothering you. You don't feel the rather portly 390lbs curb weight.

Another aspect you don't really have to pay any attention to are the brakes. The non-adjustable levers work just fine, and the feel is a hair on the spongy side, but they have no problem stopping you in a hurry. Grab the left lever hard, and you'll be rewarded with awesome brake slides. I didn't pull any huge stoppies during my time with the scoot, but I've got no doubt that there's enough power there to lift the rear wheel.

I mentioned earlier that there's plenty of low-speed thrust on hand. The modern fuel-injected, liquid cooled 298cc single makes 29bhp and 30lb/ft of torque. As you might expect, it's neither a torque monster nor is it a screamer. It's hooked up to a CVT and gets it's best work done in the mid-range. Whack the throttle wide-open and the revs jump to 6000 as the scooter takes off swiftly and smoothly. Once you get above 40 mph, the CVT brings your revs down a bit and acceleration slows. Still, getting up to, and maintaining freeway speeds is never problem. My old Ninja 250 would beat it in a drag race, then again, it's motor blew up with less than 13k on the clock. Rather than trying to squeeze a lot of power out a small motor (like the ninjette), Kymco picked spec'd the power they wanted and used as many cc's as was necessary to achieve that goal in a motor that runs without any real stress. Nice.

While I'll ride anything with two wheels and a motor, if I don't fit on the thing, or if it puts me in a seriously uncomfortable position, it's going to be a short ride. That's how I ended up with a GSX-R and not an 848. Kymco is guilty on at least 3 counts of building scooters unsuitable for 6' riders. Too low seats that don't leave you any room to scoot back, and too high floor boards mean your elbows are fighting for real estate with your knees. This kind of riding position feels as awkward as it looks. Thankfully, the People has a more normal 31.9" height seat with plenty of room to pick out a comfy spot and floor boards low enough to keep your knees out of the way of your elbows. The bars are neither high nor low, and most everything is intuitive and easy to operate.

When you say 'most everything,' there's at least one thing that kinda sucks.

The ignition. It operates in a manner not unlike a cryptic puzzle one might expect to see in an Indiana Jones movie. Put the key in and depending on whether you push down or not, and which way you turn it, you may be able to start the bike, open the gas cap, lock the steering, or release the seat. There may also be some combination of inputs that activates a flux capacitor, but I wasn't able to figure it out. Think of it like BMW's iDrive — a real pain in the ass at first, but easy to use and convenient once you learn how it works. Still, the force required to open the gas cap or pop the seat feels like enough to snap the key clean off. That same key also opens the optional top case.

There's a place for your stuff.

While I could do without the name and badges, there's no way I'd buy this thing without the optional top case. Kymco hasn't released a price yet, but you can expect the case to be around $200 and the mount for under $50. With the top-case and ample under-seat storage, you won't have to ride with a backpack if you don't want to.

Kymco has priced the 2012 People GT300i at $5,399 which is a solid 500 bucks less than the cheapest 300cc Vespa. The performance and build quality justify that price, and if I was going to buy a scooter, this model would be on my shortlist.