On Friday, I shot these pictures of Sean riding a Hammarhead Jack Pine in my riding gear. That’s a little confusing, but it’s about to get worse. The plan was to have Sean write up his impressions in relation to the ridiculously positive review I did a year back. Figured it made sense to get a second opinion. But, due to a print mag being upset that we regularly eat their lunch, we’ve been a...

On Friday, I shot these pictures of Sean riding a Hammarhead Jack Pine in my riding gear. That’s a little confusing, but it’s about to get worse. The plan was to have Sean write up his impressions in relation to the ridiculously positive review I did a year back. Figured it made sense to get a second opinion. But, due to a print mag being upset that we regularly eat their lunch, we’ve been asked not to write about the bike right now. Instead, I’ll tell you about the second neatest thing in these photos, the AGV AX-8 Dual helmet. Do not adjust your touchscreen. That is a black visor on my AX-8 despite the fact that they’re not available in North America yet. Our buddies at Urban Rider sent it over and, for $110, they can do the same for you. They’ll even sell you the helmet, if you ask nicely. Remember that HFL subscribers get personal discounts as part of our Urban Rider Lagniappe. That black visor is the big update since the last time I wrote about the AX-8. It makes the helmet look completely awesome in a Storm Trooper/Master Chief kind of way. It holds the whole thing together much better visually when that peak is off too. But, I’ve been riding with the peak on most of the time. Below 90mph it doesn’t seem to have a terribly dramatic effect on aerodynamic stability or wind noise. The helmet’s pointy, elongated chin seems to be the deciding factor there. But, turn your head for a lifesaver above that speed, with the peak on, and you will suffer a little wind blast-invoked head jerk. Aerodynamics were the big concern when I first wrote about the AX-8 last month. At the time, I’d only tried the helmet on one ride on a Yamaha FJR. Now, I’ve worn it for about a month on a Moto Guzzi Stelvio, Norge, Griso, California, Yamaha R1, this Jack Pine and probably a couple others I’m forgetting. Interestingly, it’s absolutely fine on the naked bikes, but the wind blast focussed by windscreens seems capable of affecting it. With that peak off, it’s totally good on the R1 at over 100mph, but 85 on the Stelvio could be a bit of a problem with the screen in its tallest position. No problems of any kind on the Norge. Specifically, the issue is with wind pressure on the chin piece, so I’m guessing the helmet’s angle of attack to the wind blast is the real deciding factor here. Combine channeled wind off a screen hitting that chin at the wrong angle and you’ve got a problem. But, the helmet doesn’t ever feel like it’s going to get torn off or break your neck, the chin piece just gets pressure put on it, rotating the helmet downwards, resulting in some vertical buffeting. Typically that’s only when looking over your shoulder. Other than that, I continue to be very impressed with the AX-8. That enormous visor aperture has started to make a lot more sense with the addition of the black visor (during the day, of course). Without it and without the peak, you’re simply too exposed to direct sunlight, there’s no tilting your head to block it out with the edges of the aperture, there’s simply none visible except around that nose piece. On the R1 that I’m riding right now, the extra upwards vision is really helpful. In a racing tuck or while hanging way off, I can see fully ahead without straining my neck all the way back. Ventilation is also proving to be excellent and very controllable. The two top-side vents deliver the normal amount of fresh air you’d expect from a road helmet, while the center-top makes things positively chilly inside. You can swap the switchable chin vent for the fully-open, metal mesh one off the dedicated off-road AX-8, something I might do as summer heats up. I’ve yet to experience even the slightest sign of fogging. 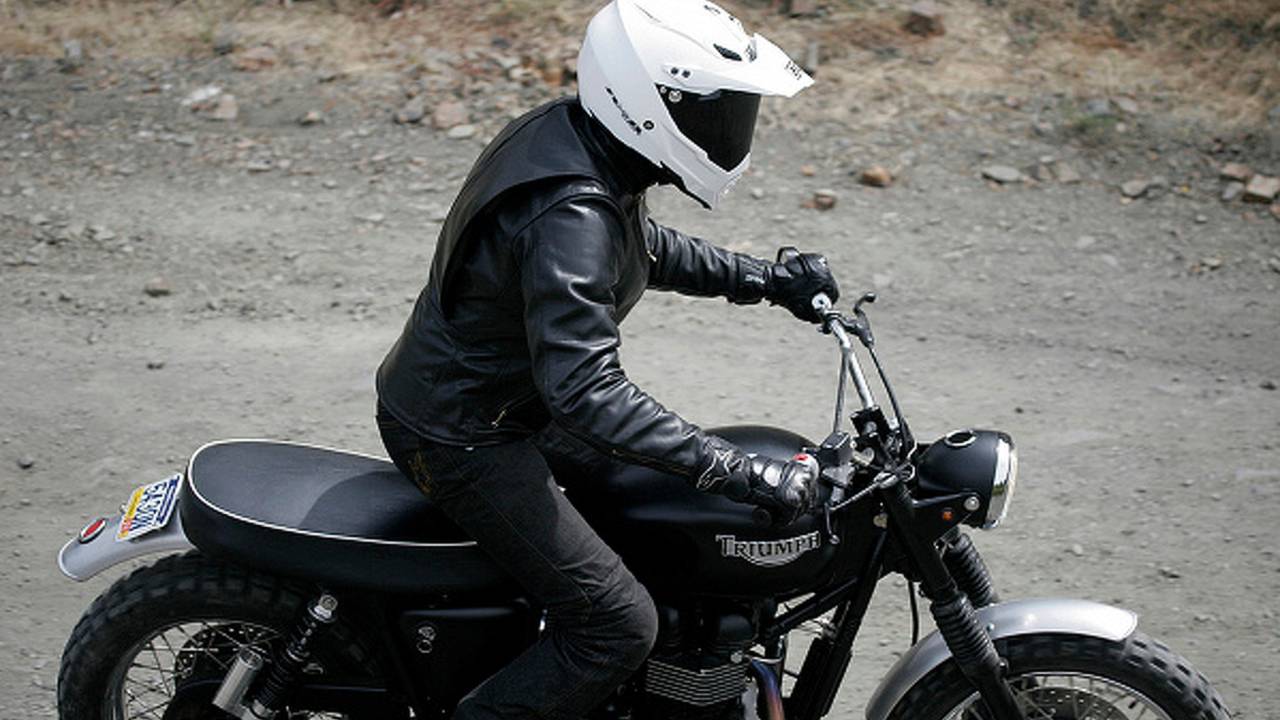 In addition to making sure the AX-8 is going to work with the wind flow on your bike, you’re going to need be extra careful about fit too. There’s considerably less padding than inside the pillow-like AGV GP-Tech, meaning it’s that much more sensitive to incremental differences in head shape. I’ve had to compress the styrofoam liner a bit around the forehead, which seems to have resolved a minor pressure point I was getting there. Another potential issue is going to be the plastic screws that hold the peak on. Likely spec’d to facilitate breakaway in a crash, my roommate managed to strip them the first tim he over-enthusiastically grabbed a regular flathead instead of the nickel I asked him to use. AGV includes an extra set with the helmet, but they’re going to strip eventually too. Some sacrificed safety and metal bolts may be in order. Thankfully, the seats are metal, so we can play this game as long as it takes to find a solution without damaging the helmet itself. That’s about it. This is an incredibly light, distinctive helmet that brings real benefits to vision and ventilation while retaining the safety and refinement of a full-face helmet. Looks good on the Jack Pine too. When you’re done looking at these pictures, check out our Hammarhead Jack Pine tag page for videos and that review. Oh, and Sean loved it too.
By: HFL Staff
++
++
Got a tip for us? Email: tips@rideapart.com