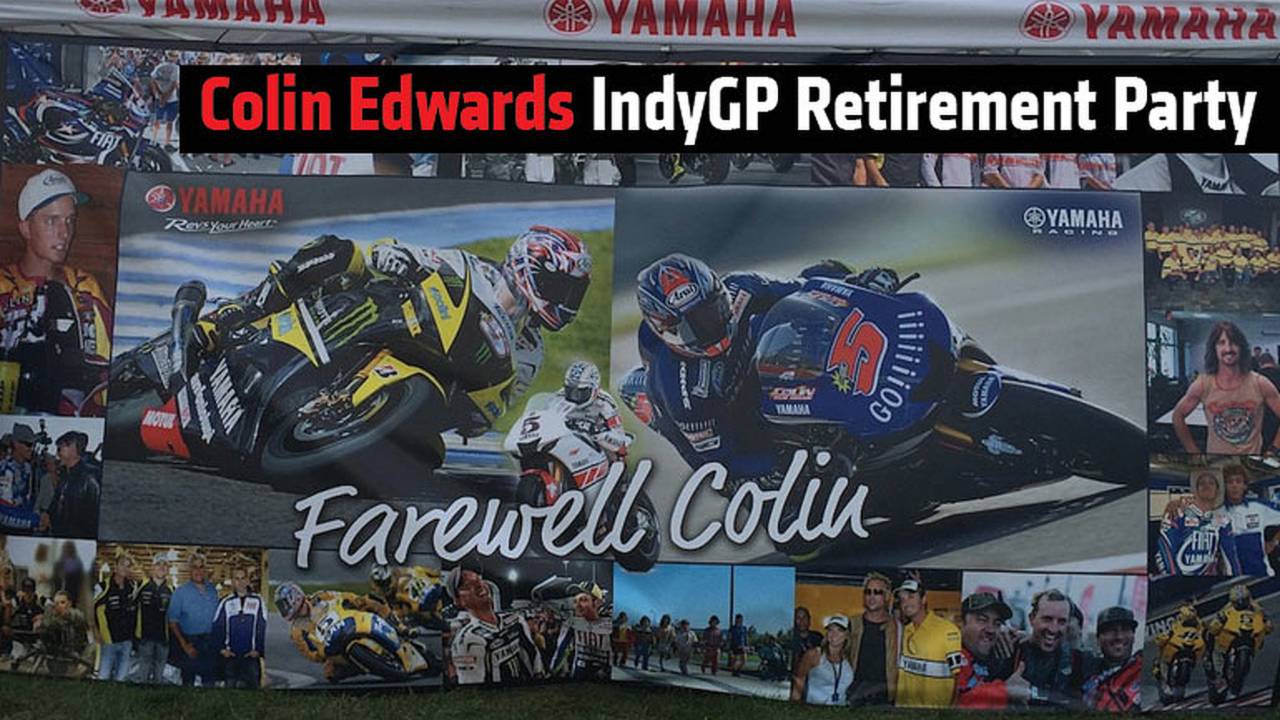 Thousands of fans gathered around the stage at Indianapolis Motor Speedway Saturday night to wish Colin Edwards farewell as he retires from MotoGP racing.

The stars of the GP paddock came out as well, each with something to say about the man who’s been a fan favorite his entire 22-year racing career. It was certainly the biggest retirement party I’ve ever seen, and even veteran race announcer Nick Harris agreed there’s been nothing like it. Many people stated that Edwards' authenticity and humor were a breath of fresh air in the straight-laced environment of MotoGP. Usually when racers retire, it's due to debilitating injuries, so their departure is just a sad, quiet fade into the background. Some return as announcers, team managers or race dads. Most, however, never experience a send-off like this. Many of us are hoping Edwards will return as an announcer, because he'd say it like it is and ask the tough questions. Edward's even joked that he'd need a "bleep!" button handy if he ended up with that job.

Edwards began racing AMA 250 bikes in 1992 in which he won half the races that season stealing the title over Kenny Roberts Jr. Not bad for a rookie, eh? He spent the next two years racing for Vance & Hines Yamaha in the AMA Superbike series, then moved up to World Superbike from 1995 to 2002, winning two championships and making it to the podium 75 times. He raced for Yamaha and Honda in WSB, before moving to Aprilia in MotoGP in 2003.

After Aprilia, Edwards raced for Honda in 2004, then returned to Yamaha in 2005 as a factory team rider through 2007. His Tech3 manager Herve Poncharal told us the story of how he got Colin Edwards. He was accustomed to choosing riders from the 250 GP series, since he couldn’t afford more experienced riders (especially not a factory rider). For the 2008 season, the Fiat Yamaha team wanted Jorge Lorenzo. So they made Herve Poncharal an offer he couldn’t refuse- Colin Edwards, an experienced factory racer. Herve was overjoyed, and they remained together until 2012 when Edwards moved to NGM Forward Racing.

Herve’s description of how a factory team compares to a satellite team was reminiscent of the Yamaha 50th Anniversary video where the team got to see what it was like to race GP’s back in the 1970’s. He went on to tell us that Colin had said at the beginning of 2008 that he’d only ride one year with Tech3, then retire. And that he’d had a four-year contract! Yet Colin had some very strong results that year, so he decided to stick around. Herve shared that Colin bonded with the team beautifully.

Riders that came to honor Edwards with a few words on how he’d impacted them included former teammate and good friend Valentino Rossi, as well as Jorge Lorenzo, Cal Crutchlow, Bradley Smith, Randy Mamola, Pol and Aleix Esparago, and competitors Stefan Bradl, Marc Marquez and Dani Pedrosa. Nicky Hayden wasn’t able to make it in person, so his statement was read by Yamaha’s Bob Starr. Everyone spoke of how much fun Edwards was and how they wished he could be in every press conference, as his raw and humorous honesty always made them fun. The Europeans also talked about the colorful language they’d learned from him, and everyone who’d been to the Texas Tornado Boot Camp spoke very highly over the fun they’d had there.

Announcer Gavin Emmett told a story about a time they found a bowling alley in Turkey and watched Colin Edwards and Josh Herrin obsessively play game after game, trying to beat each other. And that wasn't the only anecdote about Edwards trying to be the best at whatever he did.

Many people mentioned that Edwards always strives to be the best, no matter what. So I wondered if he would want to rise to the challenge of perhaps beating Mark Miller's record as the fastest American at the Isle of Man. After all, Edwards' first AMA Superbike race was also Mark's first professional race, so they got their start around the same time. Listen to Edwards' response to my question here: Colin Edwards on Racing the Isle of Man

Colin Edwards shoots t-shirts into a crowd of MotoGP fans for the last time. Photo courtesy of Susanna Schick

Edwards and His Guns

When Edwards returned to the stage after firing off his final round of t-shirts, he told us a story that he said had never been published. Like the time there was a certain post-race press conference where he hadn’t eaten before the race and was really thirsty. So the podium champagne got the best of him. He doesn’t remember much from that press conference, but he heard it was entertaining.

Yamaha put together an excellent video montage of his entire racing career, including snippets from some of their awesome videos like “Mancation”, the 50th Anniversary and “Another Day at the Office.” The time he talked about why it's a bad idea to ride on drugs in great detail with his usual frankness is also particularly entertaining. In that video is the best quote on riding with broken bones ever: "I'm thinking 9th through 16th are a bunch of pussies."

The party was a wonderful send-off, truly fitting for a rider of Colin Edwards’ caliber. There was plenty of laughter, and we all hope to make it to his ranch to slide dirt bikes, shoot big guns and drink beer. He told us he’s got big plans for the camp. Bradley Smith said he’s gone to three four-day camps and that they added up to the best 12 days of his life. The camp is the one place mortals can race against GP stars, as they all play together.

After the presentations, Edwards happily walked the gauntlet signing autographs and chatting with fans. He had just said on stage "I'm just like you. Exactly like you! Only I ride a motorcycle a little faster. Other than that, we're no different." This is why he's a fan favorite. He loves the fans, and loves being a human among humans. We look forward to seeing what's next for Edwards, especially with Texas Tornado Boot Camp.