Chicks and bikes. Can you think of a better combination? Except the reality doesn’t typically live up to the promise. But, instead of leathery “babes” in bikinis who clearly don’t ride and overt sexism, Elizabeth Raab actually set out to find a point where the two interact. Now, in a shockingly risque move for a typically conservative industry, Ducati has officially embraced her work, sell...

Chicks and bikes. Can you think of a better combination? Except the reality doesn’t typically live up to the promise. But, instead of leathery “babes” in bikinis who clearly don’t ride and overt sexism, Elizabeth Raab actually set out to find a point where the two interact. Now, in a shockingly risque move for a typically conservative industry, Ducati has officially embraced her work, selling art prints alongside 848 Evos. We reached out to the Brooklyn-based artist to figure out the idea behind the nudity and she shared exclusive high-res, desktop-ready images with us.

Update: 10 photos added to the gallery for a total of 15 exclusive high-res images.

What were you trying to achieve?

“Basically the goal with these images is to artistically illustrate the inspiration of the female form in the bike's design. I've made the women almost machine like in skin/expression/feel/positions extending and working with the lines of the bikes to give a sensation of oneness (bad word for it, but thinking on the fly here!). Even with the images where the models are in full leathers, I've tried to continue with theme even as a rider they are still in essence an extension of the machine.”

“When I originally started this series I worked only with shapes. No faces, just lines, starting with the bike, continuing through the model. I've selected each body type to fit with the model of the bike that best compliment one another. For instance my images of the Desmosedici RR, the model is actually a body builder, but you'd never know it because that bike is her equivalent, big and muscular, with beautiful lines and design. Mechanical and organic reflecting one another. I later added hair and intense eyes in order to further illustrate this theme. The hair matches the colors of the bike, the eyes have a hidden power that reflects the engine underneath. Abstraction of both.”

"I lived in Italy in my early 20's which left a massive impression on my personality and my style as an artist. When I began riding and immersing myself in the community I was instantly drawn to Ducati for that reason, as well as its long history of beautiful precision which sort of drew itself to my artistic style. On a personal level, I love a good rat bike or chopped up cafe, but artistically I love working with the smooth gradiations, bold colors and bold italian design, right down to the feel of the paint." 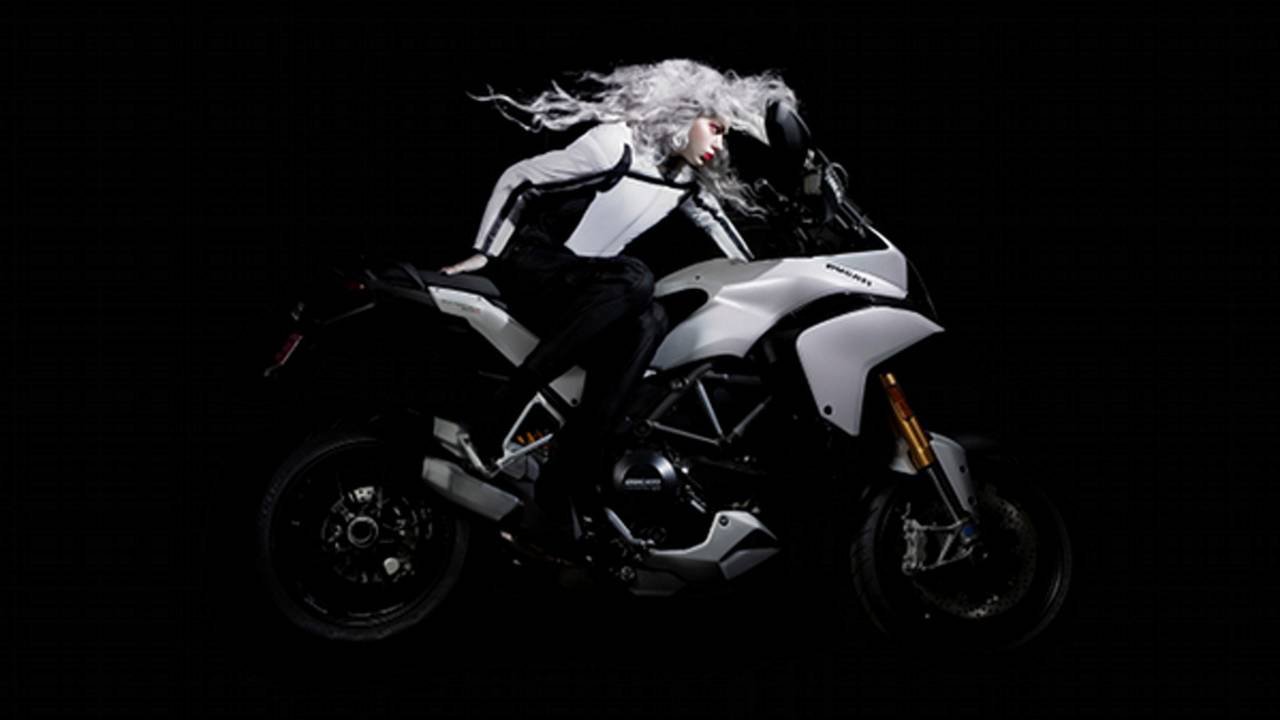 “Mika on the Multistrada is the newest so I'm naturally drawn to it right now, but Cayte on the MH900ie, It think best represents my goals for this series. And the slight creepiness in the beauty is alluring to me. Just light the danger is alluring to the rider.” 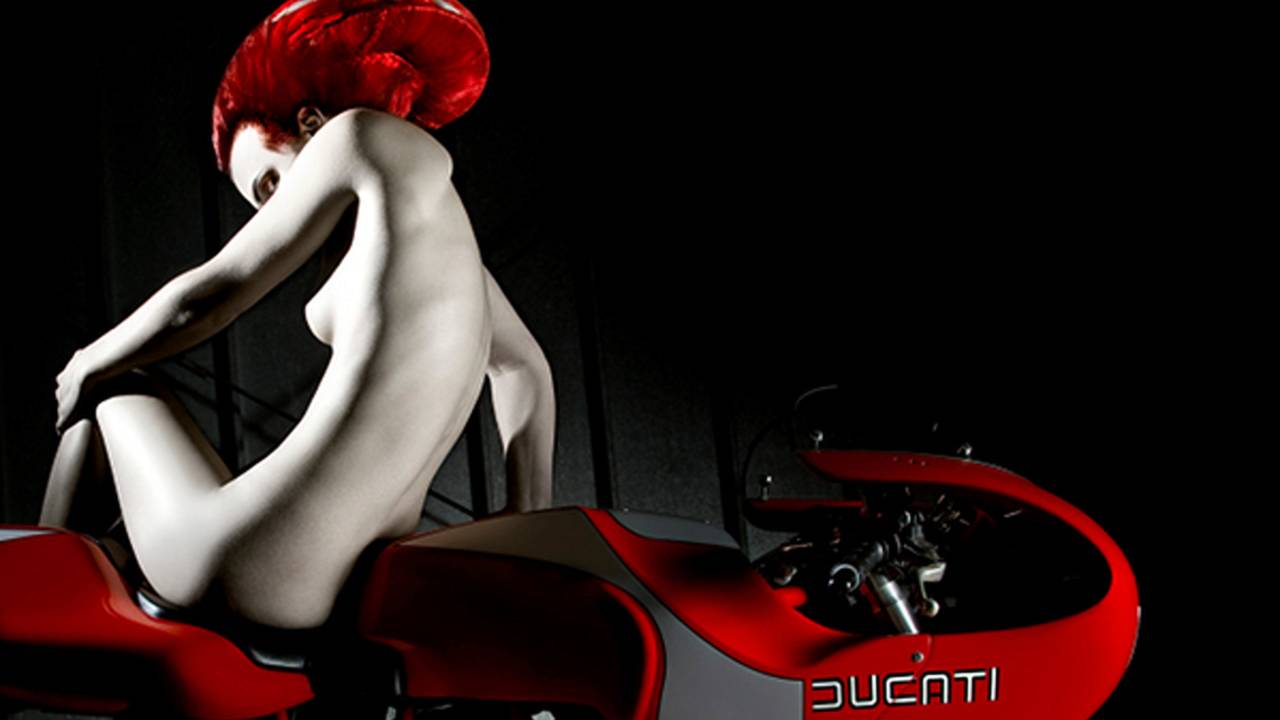 "I originally wanted you to be able to put these images up on your office wall. Albeit a fairly un-conservative office environment, but still nothing graphic. Over the course of time I've allowed a bit more of the natural elements into the mix, but I still want it to remain PG13. Its about style and design, not nudity for the sake of nudity."

What’s the connection between the female form and bike from a woman’s perspective?

"Curves! My last bike was a girl, I loved her girly curves. I've had a bike that I thought of as a guy though, he was much boxier, and sadly decidedly less stylish.... But in general for the world at large the automotive machine form is female, and motorcycles especially have those design elements.  I'm not out there to challenge design concepts, I'm out there to compliment and show them off. Personally, I hold equality of the sexes to be paramount in importance. I'm a staunch supporter of equality. But that doesn't mean I think the sexes should be repressed to the point of resembling one another as well. Separate, but equal so to speak. I love being a woman, if I were a man I'd love that too, each has the advantage. Women and men should enjoy the beauty before them from whatever viewpoint they're coming from. The fact that the world sees the machine as female doesn't make me as a straight woman enjoy it any more or less. I appreciate its beauty and love to show it off!"

Are these a reaction to stereotypical bikini "babe"+ bike photos?

"There are a couple shots out there that I love in that genre. Mario Testino did one of a blond on a huge chopper that is amazing. And I've seen one floating around of Giselle on a dirt bike which is pretty amazing."

"Also, I've come across some great vintage stuff. But I don't think that falls under the stereotypical realm. If I were a straight man I might find the basic stuff more interesting, but I'm not, so I don't. My work as I said, it about style, beauty, and theme. It extends across all platforms of my work. I'm a portraitist and my models on the bikes are portraits of that bikes design." 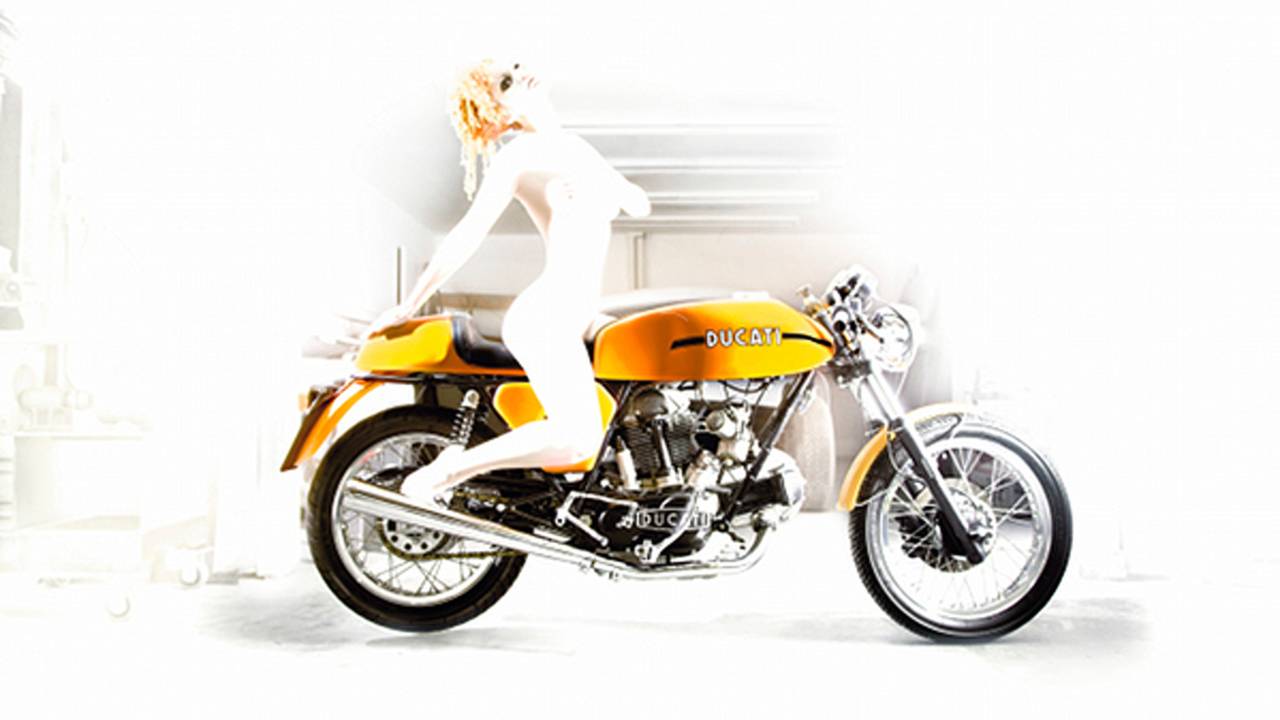 What do you ride?

"My last bike was a Honda Hawk GT, loved her, but sold her this summer as I had/have a nasty back injury (sadly totally unrelated) that isn't conducive to sport bikes in the foreseeable future. So, we'll see as the season approaches if I can talk myself into a Harley. My husband's family started the first Harley Davidson dealership in the NW and my best friend is on her 3rd hog now, so they'd be thrilled, but I'm definitely a sport/classic girl, so its a big mental adjustment. I might just buy a Diavel when they come out, throw on bar end mirrors and call it good. We'll see. It's a huge mental shift and I'm still a total pussy when it comes to NYC riding as of yet which also doesn't help the matter. I moved out here from Seattle in 2009 which despite the rain was a lot mellower ride!"

"I will say though, something about myself, I'm not a mechanical person. I know enough about bikes to talk about the general function and to tell my mechanic what I think is wrong with it, and understand when they tell me. I am however (obviously) a visual person. Performance is important sure, but I'm all about material and look and feel. As I said, when I photograph a bike, I photograph it like a portrait. Each has its own personality. When I photograph a bike with a person, I photograph them as one, further illustrating the personality of the pair."