Pierre Terblanche and Dan Van Epps on the new Norton

Despite an ailing economy, nose-diving new bike sales and naysayers insisting it simply cannot be done, looks like the new Norton's comeback is on track. Two recent big-name hires certainly have increased the start-up company's chances of success. First it was announced that American Dan Van Epps was coming onboard as head of Norton's U.S. operations. Van Epps was formerly CEO of Ducati North Amer...

Despite an ailing economy, nose-diving new bike sales and naysayers insisting it simply cannot be done, looks like the new Norton's comeback is on track. Two recent big-name hires certainly have increased the start-up company's chances of success. First it was announced that American Dan Van Epps was coming onboard as head of Norton's U.S. operations. Van Epps was formerly CEO of Ducati North America before transferring to Bologna to lead the company's overseas sales and product marketing. More recently he was in charge of sales strategy at Bimota. Bigger news was that designer Pierre Terblanche, best known for the many Ducati models he has penned, was moving to the British Midlands to become Norton Motorcycles Ltd.'s new full-time chief of design.

Hell For Leather talked exclusively with Terblanche, who had been in his new office at Norton's Donington Park headquarters for just two weeks.

Terblanche's 10-year stint as design boss at Ducati was fruitful if at times controversial (see gallery).  An understudy of the great Massimo Tamburini (Ducati 916, MV Agusta F4), Terblanche was responsible for the Cagiva Gran Canyon and the fantastic Ducati Supermono racer. When parent company Cagiva sold off the Ducati brand in 1996 Terblanche went with Ducati, where his successes included the MH900e Hailwood Replica, the Hypermotard and the Sport Classic line of retro-styled roadsters. More polarizing was his redesign of the 900SS, the original Multistrada adventure bike and, of course, the ill-fated 999 sportbike.

Charged with revamping the aging 916/996/998 series for 2003, Terblanche gave Ducati the 999, brave and bold and undeniably a better motorcycle than its predecessor. It won on the racetrack and in magazine comparison tests but not on the showroom floor, where it got the cold shoulder from Ducatisti. By 2007 the unloved 999 was gone from Ducati, and so too was Terblanche, increasingly unhappy with his corporate responsibilities. "I wanted to design, not sit in endless meetings choosing company stationary or whatever," he says.

The Ducati 999's biggest styling sin? It wasn't a 916. Unique design, though, something not readily said about its replacement, the 1098, which with green paint could just as easily be a Kawasaki.

After a legally prescribed passage of time, Terblanche was back at the drawing board, consulting for Moto Guzzi with his former Cagiva/Ducati colleague Miguel Angel Galluzzi (Ducati Monster, Aprilia RSV4), now VP of design for the Piaggio group. Together they came up with three Guzzi V12 concept bikes, modern takes on M-G's venerable sideways V-Twin that wowed show-goers at Milan in 2009.

Starting with the Cagiva Gran Canyon, then the Ducati Multistrada and Hypermotard, and with this Moto Guzzi V12 concept, Terblanche has shown his fondness for off-road inspired streetbikes. Is there one in Norton's future?

Terblanche says there is at least one more of his Moto Guzzi designs in the pipeline, but when Norton CEO Stuart Garner came calling with the chance to start from the ground floor in decidedly non-corporate surroundings, he had to go. "If I were a younger man, I'd have stayed and seen the Guzzi project through, but after 21 years in Italy it was time to move on," says the South African-born 54-year-old. "Norton is different environment, a different work culture. It's a bit like working with Tamburini back in 1989. It's unstructured so design can be quick and I'm working directly with the boss – no weeks of meetings in which nothing gets done."

The chance to apply some Sport Classic-type touches to the Commando 961 – styled identically to the Kenny Dreer Nortons from five years ago – must be appealing to Terblanche. Or perhaps the design can be modernized a la the Guzzi V12 concepts?

"Obviously, both are possible," answers Terblanche, lamenting Bologna's discontinuation of the Sport Classic series. "Ducati didn't see the future of the classic-type bike. It's a shame they didn't carry on the line; it's certainly a strong trend right now. But we've just started selling bikes, so it wouldn't be fair to current customers to redesign the 961 right away. In the future, look for detail improvements, and with Norton's history we can really go in any direction we want." 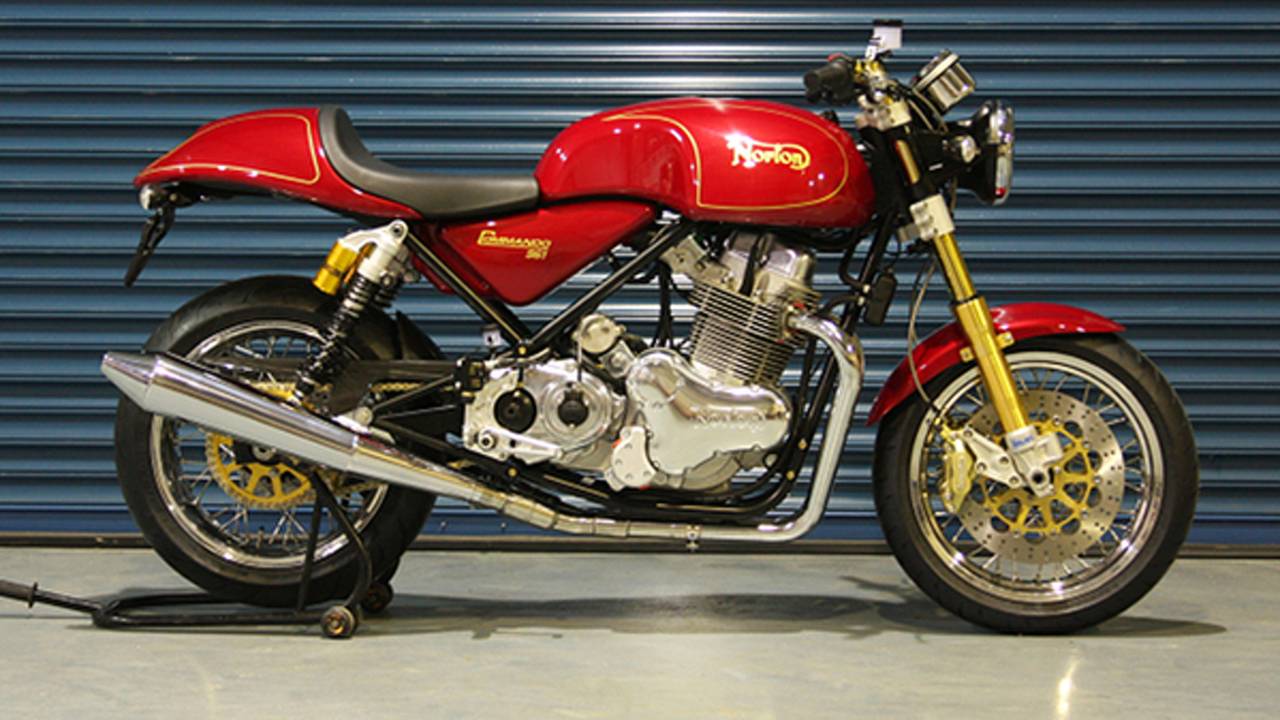 That there even is a Norton Commando in 2011 is due to Kenny Dreer and investor Ollie Curme, who rounded up trade rights to the Norton name and produced a running prototype, a $10 million endeavor by the time Stuart Garner purchased the company in 2008.

CEO Garner, 41, who made his millions in the fireworks business, has already stated his intentions to broaden Norton's range of models, including water-cooled multi-cylinders and even a MotoGP bike, a prospect that excites Terblanche. "Yes, if that comes to reality I'll be designing the bodywork," he says.

First things first, though, like laying out an in-house design center. "There's lots of work ahead of us, lots to be done," Terblanche says. "We've got to set up a design studio, bring it all in. But that's also an advantage in that there's nothing here that needs to be undone."

If anything, Van Epps' canvas is even blanker. Based in his home state of Connecticut, he has neither bikes in hand nor a dealership network through which to sell them. He does have deposits from American buyers for 50-60 bikes, and two 961s are currently in homologation testing for the EPA and California's Air Resources Board. "We're shooting for on sale in April, but I think the reality is late May," he says. As far as dealerships, he's looking for shops with what he calls a "European sensitivity," noting that current Ducati or Triumph operations are the most likely scenarios.

So, two men – one an American with a Dutch name, the other a South African with a French name –  who helped put Ducati on the map are now teamed up to help bring one of Britain's grand old nameplates back to life, funded by a pyrotechnic who wants to go MotoGP racing. Unlikely as that sounds, Terblanche puts words to the optimism running rampant at the new Norton. "We're small, we're ambitious," he says. "We plan to have some fun and make motorcycles that people will really like. We will be successful."