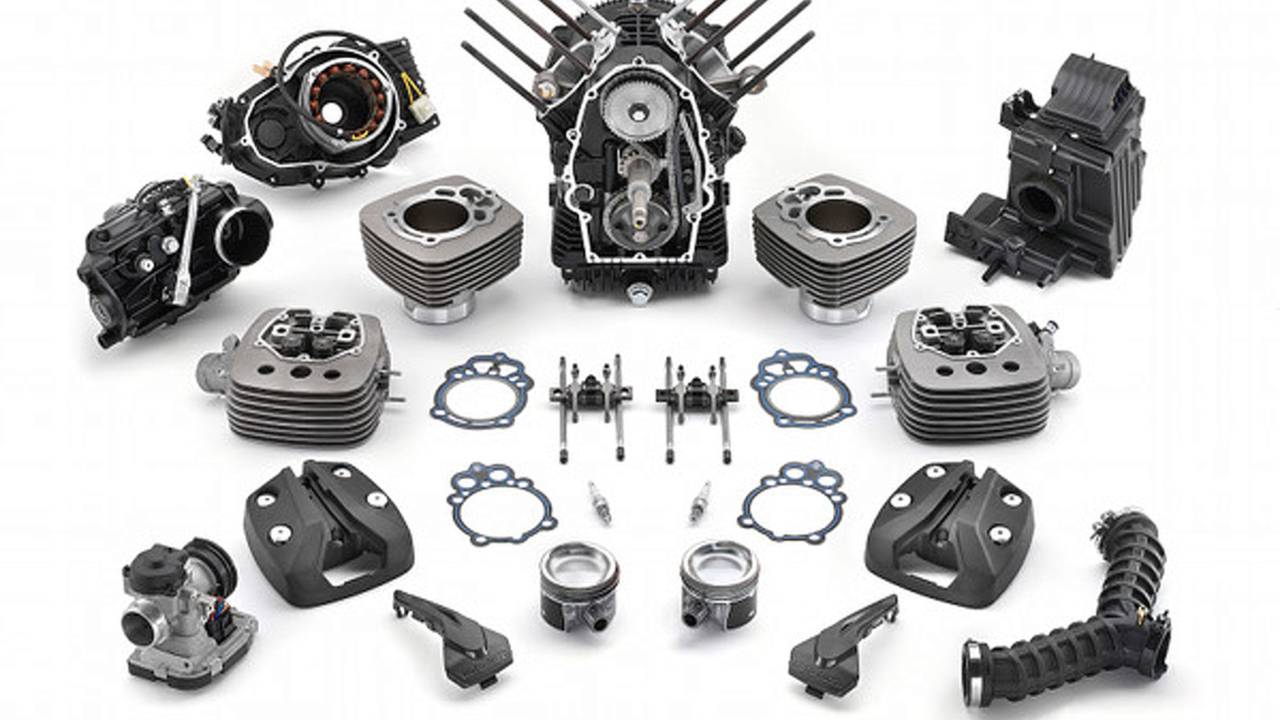 “We are going through a time of color blindness,” Miguel Galluzzi told us last year. “People want things in black or white and, if they do choose a color, they go for grey. Working for Aprilia and Guzzi, we don’t think like that. We try to push new colors.” These new V7s are a great example of that, and also the precise, emotive detailing that so defines the brand. There’s this absolut...

“We are going through a time of color blindness,” Miguel Galluzzi told us last year. “People want things in black or white and, if they do choose a color, they go for grey. Working for Aprilia and Guzzi, we don’t think like that. We try to push new colors.” These new V7s are a great example of that, and also the precise, emotive detailing that so defines the brand. There’s this absolutely gorgeous new fairing for the V7 racer and some stunning new colors and finishes too.

There’s actually three new models here, all taking advantage of the new, single throttle body, 744cc v-twin. Nicknamed the “Small Block” to the new California’s 1440cc “Big Block,” its looks are cleaned up and a higher compression ration brings power up to 52bhp. Much more than just a number, it should have a broader spread of power and run much, much smoother, with less mechanical and more exhaust noise too.

Those three models are the Stone, Special and Racer. You’ll be familiar with that sexy Racer already and we’ve published photos of the orange special and black stone, but 2012 marks serial production for all three; these are now the full and regular V7 range.

Guzzi says: “This represents the entry level model to the range, more for the versatility of its style than for essentiality in its equipment. Thanks to the new lightweight, minimalist alloy wheels, the new V7 Stone attracts a more varied audience than the other two versions, clearly inspired, even in the chromium plating choices, by the legendary Moto Guzzi bikes of the past. The plain colour combined with the simple design of the six split spoke wheels enhances the brightness of the chromium plating and the various metallic tones, providing the whole package with great appeal and modernism, representing the ideal base for developing new aesthetic personalisations.”

“The lightweight alloy wheels allowed a reduction of 1440 grams at the front and 860 on the rear, with a consequent drop in gyroscopic inertia of about 30%, an advantage in terms of dynamics which translates on the road into greater agility and speed entering turns.”

The big deal is those wheels and a choice of really, really nice matte black or matte white paint.

Guzzi says: “This is the closest to the original V7 concept, not only because it shares its name with the first V7 signed by Lino Tonti, but because if faithfully cites the same riding philosophy, that of a touring bike with sophisticated finishings and exclusive technical solutions. Just like its ancestor, it is wrapped in a two-tone colour concept and equipped with precious spoked wheels with aluminium rims which, as in the case of the V7 Stone, contribute to improving the riding dynamic thanks to the lower weight compared to the V7 Classic. The new engine, significantly more powerful, is perfectly suited for medium range touring and contributes to low fuel consumption and greater tank capacity. It provides a flagship riding range, a role which it can easily interpret once equipped with bags and windshield, accessories which go well with the overall design of the V7 Special.”

This is the one with color. Either an orange/white or black/yellow two-tone.

Guzzi says: “The Racer is now the only sport version of the V7 and the model in the range which benefits the most from the two most significant changes: The new single throttle body V twin, which provides more sporty performance, and the metallic tank, further enhanced by the specific chroming of this elite version.

Manufactured in a numbered limited edition as shown by the commemorative plaque on the steering yoke, the V7 Racer stands out for the executive refinement of the details as well as the elegant leather strap. This is a clear reference to legendary bikes of the past, as are the metal accents of the Moto Guzzi badge which is colour-coded with the frame. The red frame, itself inspired by the legendary early V7 Sport with CrMo frames, is the result of a special painting treatment extended to the hubs, wheels and swingarm as well, which accentuates the architectural purity of the frame.”

“Perched on top of the frame's tubes is an ultra sporty single-seater saddle (a two-seater saddle and pillion footpegs are available as optional accessories), upholstered in suede and terminating in an aerodynamic tail fairing that also incorporates lateral race number panels in true Seventies style.”

“With its tiny Plexiglass screen above a race number panel, the top fairing - an exemplary expression of the Guzzi school - cites the front of the legendary Gambalunga. This unequivocally sporty element is in perfect harmony with the new design of the front mudguard. One of the most distinctive features of this unique special edition is the widespread use of brushed, drilled aluminium. This hand-crafted treatment, which requires superb artisan skill, has been applied to the side panels, the throttle body guards and the silencer mounting brackets.”

“Other standout features are the adjustable set-back billet footrests, the lightweight steering stem and the steering yoke guard consisting of a double chromed ring, which is so exquisitely crafted that it looks like an ornamental feature. There is also a pair of prestigious Bitubo WMY01 shock absorbers with adjustable spring preload in rebound and compression thanks to a 12 click adjusting knob. This is a bike which should be ridden strictly in black, with a skullcap helmet and leather studded gloves.”

Side panels in brushed, drilled aluminium.

That top photo of the faired V7 Racer? That’s the new “V7 Record Kit.” Guzzi says: “The name Record evokes the Moto Guzzi V7 prototype which broke 19 speed records in the 70's. The shape of the components in the kit brings to mind the aerodynamic solutions which were so typical of the 70's racer. The kit is comprised of a rounded top fairing that houses the V7 single headlight, characterised by the side profiles that join the fuel tank area and a saddle that encompasses the single seat tail, shaped to form a spoiler at the end. The sport saddle is made from special two-component, fire and waterproof foam material with shape memory, the maximum in technology derived directly from the sport world. The components are made of fibreglass, in compliance with approval standards and they are easy to install, thanks to the mounting brackets (for the top fairing) in laser cut and sandblasted steel.”