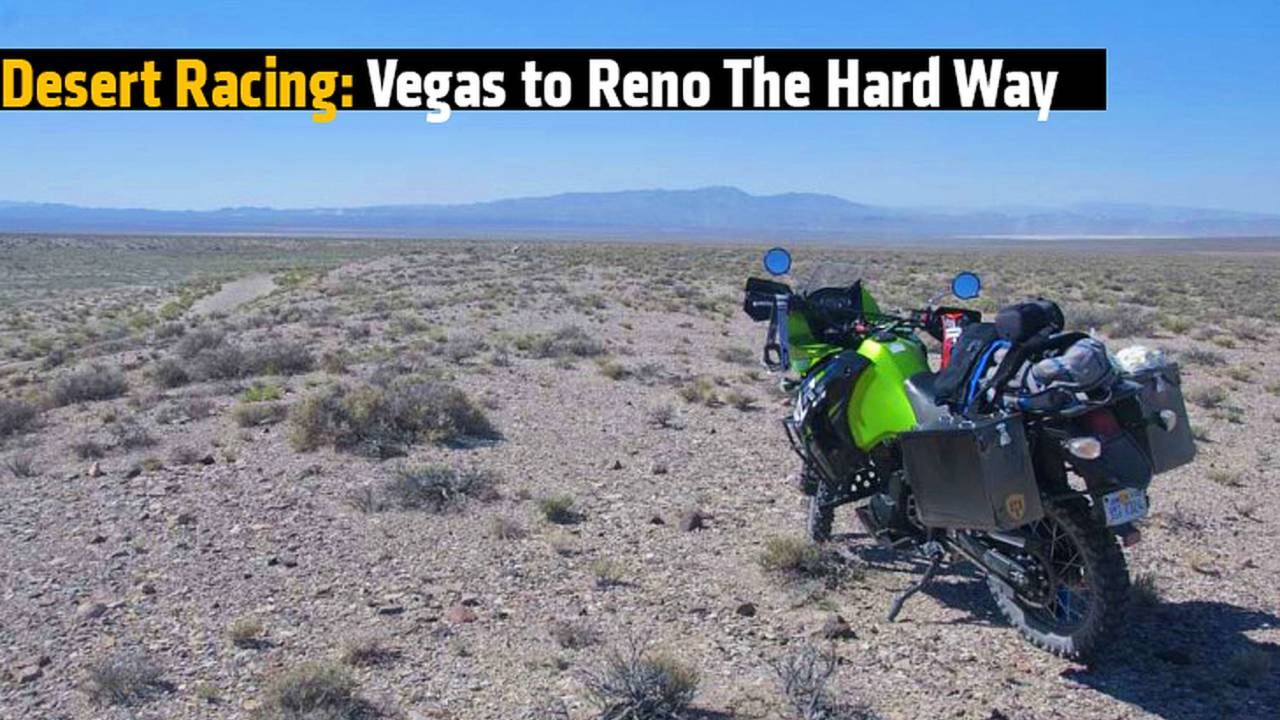 Best in the Desert Racing Association holds the longest race in the United States, Vegas to Reno. We take a look at some of the best off-road racing motorcycles and cars.

There are many variations of racing in this world, but few give racers and spectators the excitement that desert racing consistently delivers. Best in the Desert Racing Association, led by the incomparable Casey Folks, has put together the best combination of racing fun for the drivers while also making the courses easy to reach for all of the diehard spectators.

The General Tire Vegas to Reno, Presented by Fox Racing Shox, is the longest desert race in the United States. This race is one of nine events on the Best in Desert schedule for this year, with each race being scattered around the Southwest area of the United States. Not only is this race 530+ miles long, but it is full challenges for the drivers, riders and chase teams. Just getting to the finish line is an accomplishment in itself. Winning the race? Well, that’s a different story…

The SXS Industries Kawasaki team sits pretty in contingency next to the KC Hilites race support rig. KC had a full display at contingency, including some great deals on their industry leading light products!

While the name implies that this race stretches all the way from one busy city to the next, Vegas to Reno actually starts about two hours north in the small town of Beatty, Nevada, and ends up near Carson City, Nevada. Thursday morning was the first event of the weekend: tech and contingency. If you’re looking for a plethora of off-road products all in one spot with the occasional awesome deal, then contingency is a must-attend event.

Racing started Friday morning. The best part about this particular race is the course often parallels the main highway, making it easy to drive and stop to see the drivers pass by. Then, when you see your favorite drivers, you can continue up the road, eventually ending up at the finishing line before the racers get there.

The desert terrain is harsh, as evidenced by the foreground, and the racers are flying through it with incredible speed to stay ahead of their competitors.

First off the line on Friday morning was the motorcycle class. Starting on the pole was the Monster Energy Kawasaki team of Robby Bell and Ricky Brabec. They would take off around 5:45am and keep the lead the entire race, matching the pace of the top racers and even pulling away to solidify their win in this grueling race.

Quads are also blazing through the desert in these races, with high speeds and big motors the norm in these 4-wheeled machines.

After the lead motorcycles took off, it was time for the quads and UTV’s to make their way to the green flag. Quads have seen a decline in numbers over the years, but it is still a very competitive segment within the desert races.

A class that has seen a huge numbers increase over the past few years is the expansive field of UTV’s. Almost 60 pro-UTV’s were entered in previous races this year, and Vegas to Reno was another strong showing for the UTV class. Pro-UTV’s are finding more and more speed with each consecutive race. It's not uncommon to see 80+ miles per hour on open stretches in a UTV these days. Yes—you read that right—80!

Jason Voss, shown here catching some air around mile marker 170, already secured a massive lead. He would never look back while enjoying a near perfect day on the course to take the coveted Unlimited Class victory.

Last were the 70 Unlimited-class vehicles that left the starting line around 10:15am. These are the Trick Trucks and Class-1500 cars that everyone loves to watch because of their huge suspension travel, gobs of power and massive tires. All of the best desert racers in the world, including the likes of Robby Gordon and Bryce Menzies, enter into the Unlimited classes to see how they can tame the desert.

Vegas to Reno proved to be a hallmark race for one of the sport’s up-and-coming Trick Truck drivers. His name is Jason Voss, and he is quickly becoming the guy to beat in the Best in the Desert Series.

Jason started his #1 Trick Truck on the pole after an exemplary qualifying session, this allowed Jason to put some good time on his closest competitor, NASCAR’s Justin Lofton. As I was standing at mile marker 150, he was already almost five minutes in front of second place after only starting 30 seconds ahead.

Kawasaki lent us a 2014 KLR650 to chase this race, and this motorcycle turned out to have the perfect blend of on-road performance and off-road capability. We couldn’t think of a better chase vehicle!

For the most part, this year’s course was fast with plenty of high-speed corners, jumps, flat roads and great views, all of which made for some great racing. The course was also littered with rocks, from the pebble-sized variety to boulder-sized “gotch-ya’s.” Numerous racers commented on how these rocks were taking out countless cars in the race. I even had a kid racing a dirt bike stop on the course where I was situated and ask me for some medical help. We worked together to clean him up and get him back on the course.

The single seat buggy of Sam Berri is always fun to watch! Sam is a fantastic driver, and his buggy is always on rails at these races.

At the end of the race, Jason Voss kept the lead to come out on top, hitting every mark. Another team to take the win from the pole was the Monster Energy Kawasaki team of Robby Bell and Ricky Brabec. These guys rode a flawless race and took home the win in the pro motorcycle class.

The Class-1500 vehicles enjoyed a great race, and Justin Lofton took home the win in his 1577 Car. Justin has had some bad luck in this race in the past, but he turned that around this year and drove a smart race to enjoy a podium finish.

In the Pro-ATV class, David Scott and Danny Prather would take a slim 11-minute win aboard their trusty Honda.

The UTV classes also enjoyed some great racing. In the Pro-class, Mark Holz and Scott Kiger of Coastal Racing took their factory Polaris RZR XP1000 to the win by a mere 55 seconds over the other factory Polaris team of Jagged X’s Brandon Scheuller and Blake Van De Loo.

If you are interested in attending one of these races, check out the last two races in the season. The next one will be in Parker, Arizona (Bluewater Desert Challenge on October 16th), and the season finale will take place in Henderson, Nevada (Henderson 250 on December 2nd).

We hope to see you out there! In the meantime, be safe in the off-road jungle…

UTV’s are flying these days, often hitting 80+mph on the wide open sections of the course.

Can-Am’s factory effort is with the Murray Racing team. This team has finished 29 consecutive races, making this vehicle one of the most consistent in the field of UTV’s and solidifying Can-Am’s commitment to produce a reliable and durable Maverick platform.

The racers enjoyed some open sections of the course as well, such as this washed-out dirt road.

Lonestar Racing is fielding an entire fleet of UTV’s in BITD this year and garnering up impressive results.

UTV INC is also a new aftermarket company to the BITD scene. They are already making an impression on the rest of the field with solid finishes.

This motorcycle rider shows us a little style while railing a corner in the desert.

Justin Lofton, a NASCAR star and off-road racing advocate, was on rails at Vegas to Reno and ended up taking the Unlimited Class 1500 win.

Unlimited vehicles are a sight to see with their incredible engines and gobs of suspension travel, making even the largest bumps disappear beneath them.

Cameron Steele, known for his involvement in all forms of motorsports, would drive his way through the field to a top-10 overall at this race.

This Class 1500 car shows us how to throw the back end into a corner and make it stick. Yes, desert racing is sure fun to watch!

The 1575 LVDC car shows us how to rail a berm perfectly while exiting a sweeping corner at high speed. If you look carefully, you’ll see that a spare tire is missing from the back.

TSCO’s Weyrich racing family has been on a tear lately. This truck was on rails at Vegas to Reno, and ended up finishing near the top to cap off a successful weekend for this family-oriented race team.

The team of Steve Oliges and Rob Mac are always the ones to watch out for at these races. Take a look at this custom paint job, which pays homage back to the nostalgic “Rough Riders” team of the 90’s.

Strobel motorsports comes all the way from back east to race every one of the BITD races, and he is really making the trips pay off with consistent up-front finishes at this year’s races.

Our KLR650 from Kawasaki turned out to be the ideal adventure vehicle for chasing a race such as this with its ample storage capacity and all-terrain capability.

The terrain along the course at Vegas to Reno was extremely picturesque! Here, one of the trophy lights is doing it’s best to stay out front.

Air time! Yes, even the smaller buggies air it out once in a while. This driver just happened to have some fun for our camera.

As the sun sets, the race keeps on going. Drivers and their crews had the opportunity to finish the race until 11am Saturday morning. It was a long night for some teams…

Thanks to C2OffRoad.com for helping with the coverage.