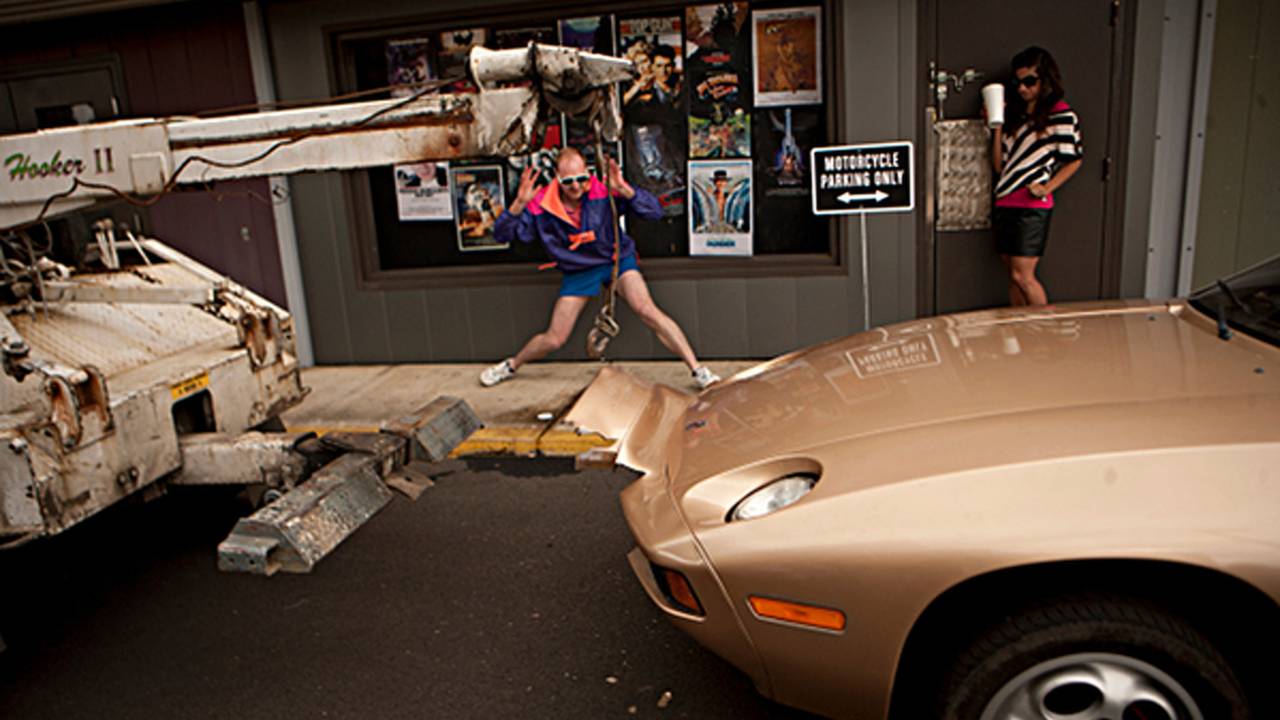 What happens when the guys at Icon get their hands on a Porsche 928, a couple of Harley stunt bikes, a pair of short shorts and a budget to make a safety PSA? Fireballs, that’s what happens. Fireballs that took the fire department 45 minutes to extinguish using two firehoses. This is motorcycle safety Portland-style and you’re seeing it exclusively here first. http://www.youtube.com/watc...

What happens when the guys at Icon get their hands on a Porsche 928, a couple of Harley stunt bikes, a pair of short shorts and a budget to make a safety PSA? Fireballs, that’s what happens. Fireballs that took the fire department 45 minutes to extinguish using two firehoses. This is motorcycle safety Portland-style and you’re seeing it exclusively here first. http://www.youtube.com/watch?v=-T_-cxt6ETc “In most motorcycle vs. car incidents, the motorcyclist does not come out on top,” explains Icon video director Matt Sanders. “We wanted to make a video where the bikers get a chance to do what many of us have dreamed about after that car cuts you off in traffic.” “We recently added Rob Carpenter and Chris Rayburn of 1-Wheel Revolution to our team of riders. We really wanted to take advantage of their V-Twin stunt bikes and put them into a situation that would be impossible with traditional sportbikes. The biggest difference we noticed between their Sportsters and a typical sportbike is the side-mounted exhaust vs. a sportbike’s under-engine exhaust. This means the bottom of the Sportsters are very rugged and could take (or deliver) some abuse. Plus the bikes weigh in pretty hefty if you want to use them for breaking stuff.” “We were originally planning on using a Prius, but the market for salvage-titled hybrids is booming and you just can’t pick one up for cheap. So our design director, Kurt Walter went searching on Craigslist and came across a screaming deal on a champagne 1980 Porshe 928. It looked perfect but had 190k on the ODO, a bent front end, and smelled like must. At first we felt bad knowing it’s fate but after a couple of drives we knew it’s time had come and passed. Plus, wouldn’t it be more green of us to take a dirty old V8 off the road than a hybrid? So, our hypermile-ing technophile just turned into an ‘80s driver’s ed spoof.” “We shot the video around the Portland area while the stunt riding was filmed at the Lee Broadbent fire training facility in St. Helens Oregon. We couldn’t have asked for a better location. Several of the fire fighters were avid motorcyclists and they treated us very well. They were extremely excited to get the chance to “train” on our vehicle. The biggest surprise came when we torched the car at 4:30am with ½ a tank of fuel left in it. Apparently, we should have emptied the tank before ignition. It took them almost 45 minutes to extinguish the fire at point blank with 2 fire hoses!” “The whole thing was pretty low budget overall. The asshole driver is one of our product developers who just so happens to be an asshole, the band members are mechanics from our local Ducati shop and we used our favorite B-movie effects coordinator for the fireballs. Also, the character names in the video are fictitious and are not meant to implicitly mock editors of any specific blogs, digital magazines, etc. Any resemblance is purely coincidental. And hilarious.” We've reviewed the Icon Airframe Construct helmet seen in this video.