The best Hammarhead photo shoot ever

Everyone who reads HFL knows how much we adore Hammarhead bikes. Back in June 13, 2011, James Hammarhead hired me to shoot all three models in one very special location. The shoot was for an outside project that never materialized, leaving the photos to languish on my hard drive. Finally, James has decided to release the images and has even given HFL an exclusive of his reflections on that day. I ...

Everyone who reads HFL knows how much we adore Hammarhead bikes. Back in June 13, 2011, James Hammarhead hired me to shoot all three models in one very special location. The shoot was for an outside project that never materialized, leaving the photos to languish on my hard drive. Finally, James has decided to release the images and has even given HFL an exclusive of his reflections on that day. I was going to make a giant scrolling feature, but I really want these photos out in the world. I've picked 38 of my favorite as a single gallery, hope you enjoy. - grant

Honor the Past by Never Looking Back

Our production schedule synchronized so that a Woodsman, Solo X and Jack Pine were all in need of a few hours of testing before delivery. I invited Grant Ray to photograph the cohort in action. The day before the shoot, the primary location canceled due to concerns about insurance or some such nonsense. My first impulse was to fall back to an abandon industrial site in Philadelphia. But Grant made a strong case for a natural setting, so I countered with “The Farm.”

I spent my early years on a small Pennsylvania farm, where I took endless rides on the tanks of my older brother’s XL 70. Later, my brother taught me to ride a hand-me-down Indian Boy Racer. I went on to roam the wooded trails on my own Yamaha GT 80 and finally a glorious Penton 175 Jackpiner. The Jackpiner is long gone but the Boy Racer is still in the barn. 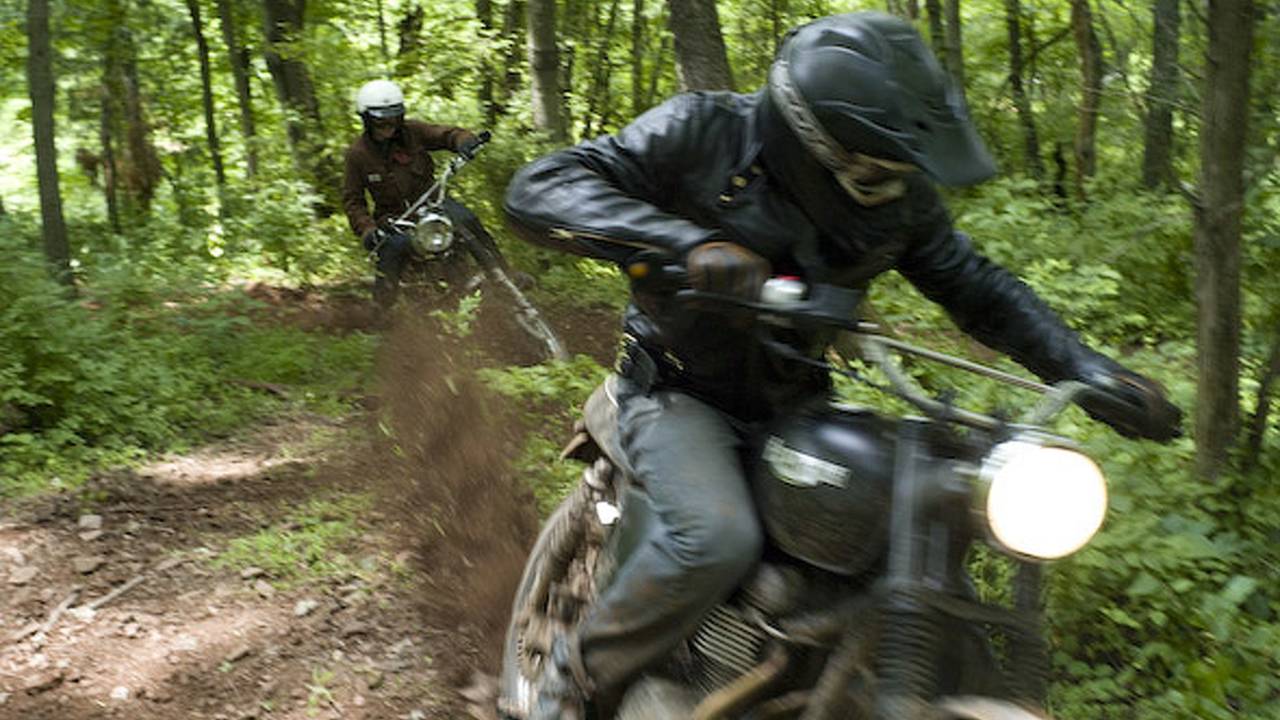 “The Farm” is a bucolic tract of land about an hour outside Philadelphia. In the late 70’s there were endless trails to ride and a dilapidated barn to explore. My sister and her family live there now and have made a few improvements. The barn has been renovated to include a fully equipped shop, filled with an assortment of quads and motorcycles. The back field has been turned into a full-sized practice MX track and a hare scramble loop now weaves through the dense woods, crosses a winding steam and traverses several intimate meadows. Paradise.

When I filled Grant in on the new location he was a bit perplexed. “Why the hell didn’t you pitch this place from the start?” The reasons are complicated. These woods had been my childhood refuge and I had not been there in 30 years. I knew riding there on the Hammarhead bikes was going to be eerie. The thought of bringing the HHI team, our bikes and Grant to this location was a bit unsettling for me. 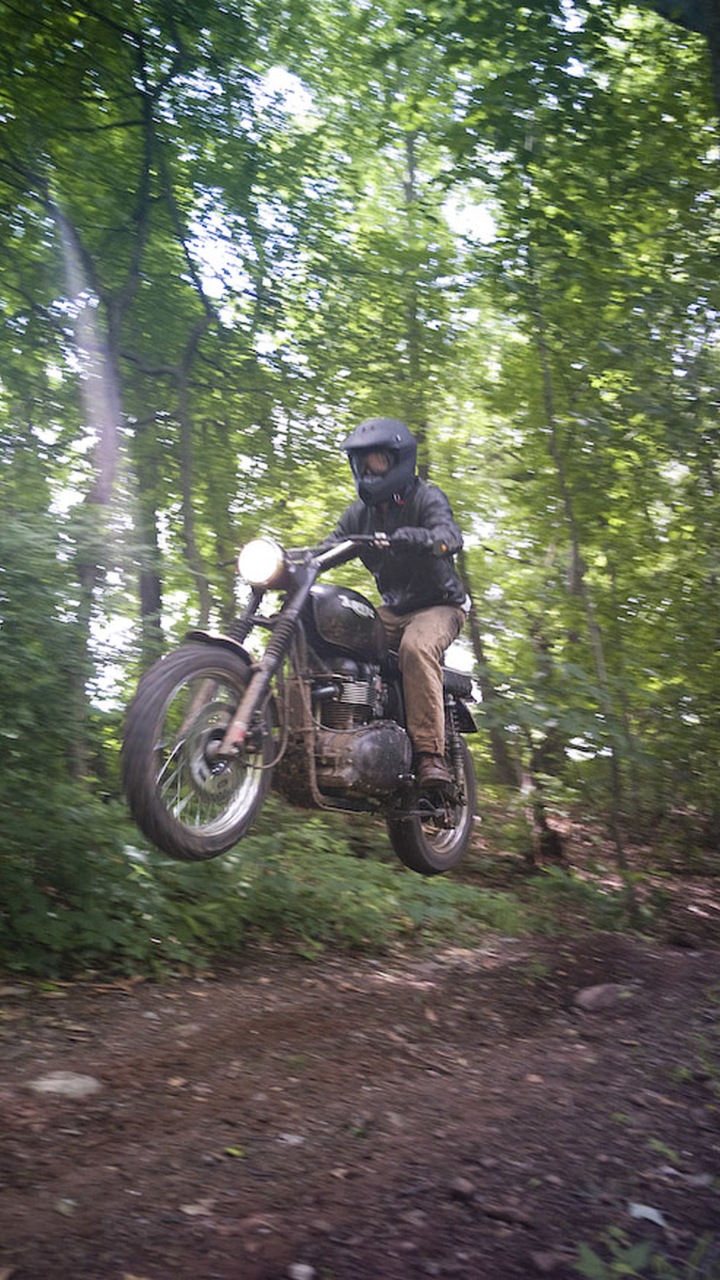 Like most photos shoots, we began with the predawn rendezvous, drinking bad coffee and popping tie downs. Grant brought along Flat Track racer and mutual friend, Scott Rounds, to ride for us. Scott was joined by our primary test rider Greg Pamart and as the day heated up, my 16-year-old nephew, Jake Ekhart, joined. Urged on by Grant, the Hare Scramble loop began to resemble a race day. Watching the action from the ridgeline across the gully, I realized “The Farm” was hallowed ground. This was the place I returned to when creating the Hammarhead bikes.

The forests of Pennsylvania are primordial. As a child, I had felt that kids owned the woods. When adults came looking for us, they seemed to stop at the tree line and shout, but never dare to enter. I felt free in the woods; for the first time there was no doubt that I was my own agent. This freedom was amplified by a heady dose of fear when I rode the Boy Racer along the trails my older brothers had cut. Here in the woods, my first stream crossing, steep hill climb and serious air were each an uneasy mix of excitement and fear. 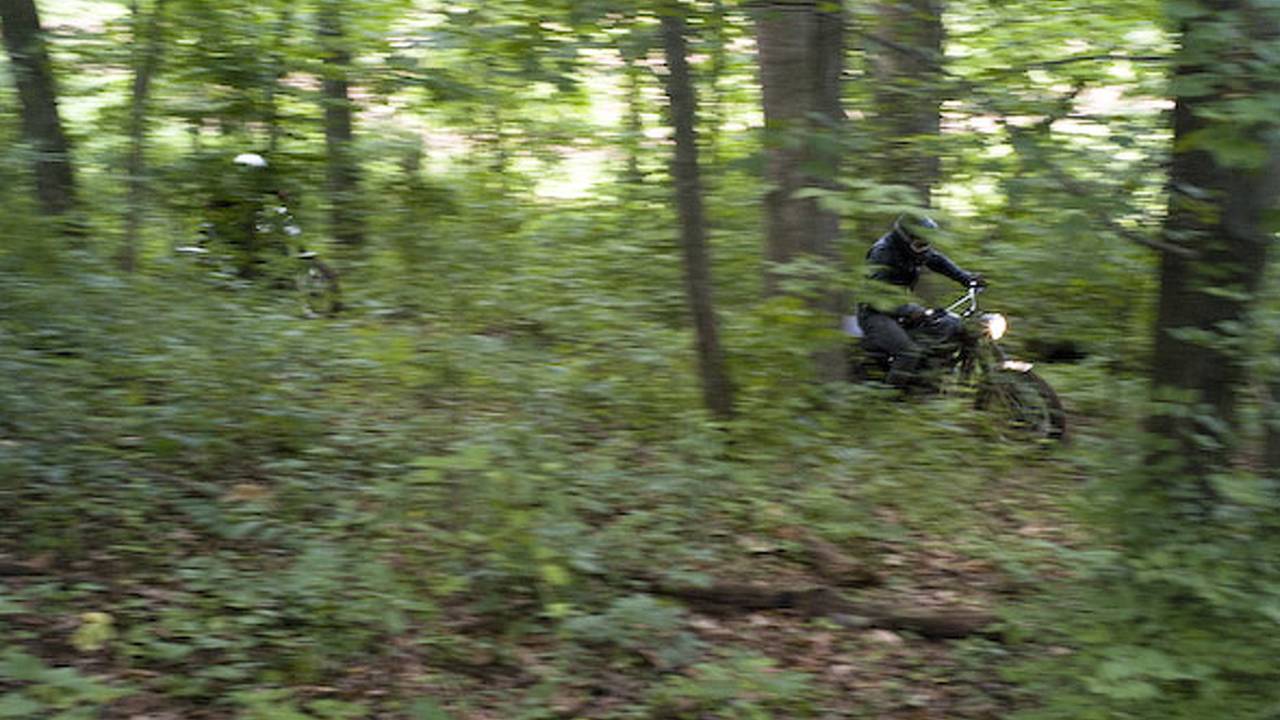 Thirty years later, the combination of fear and freedom was again palatable as I prepared for my last creek crossing of the day. For me, this mixture of queasy empowerment is the primal state that motorcycles can induce, shattering the lethargy of an anxiety prone post-modern life. In fact, everything Hammarhead creates is an exploration of the uncomfortable, electric affirmation that happens when a motorcycle reminds us that we are alive.