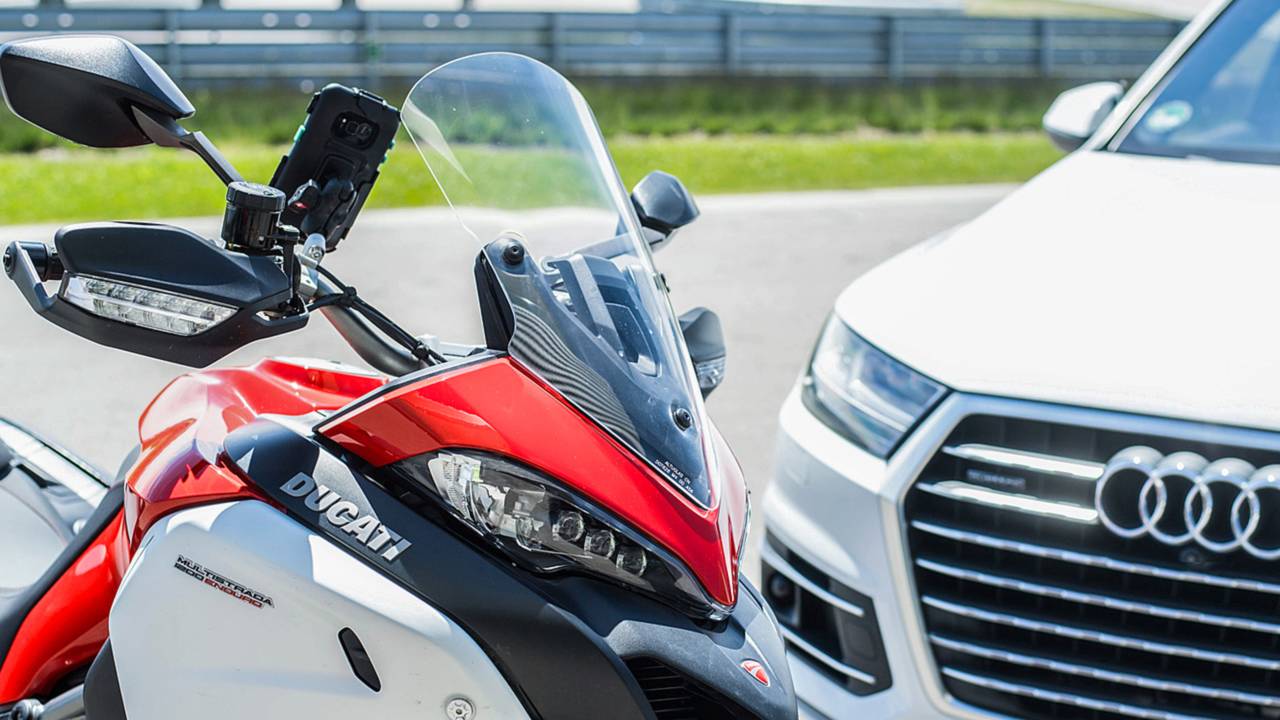 Ducati has revealed the next step towards their 2025 Safety Road Map motorcycle utopia and it relies on vehicle to everything communication.

Lasers and C-V2X, Ducati has its plan laid out to make riding safer

Earlier this year, Ducati announced its first few steps in its "2025 Safety Road Map" project that includes the gradual integration of new safety technologies into its bikes. Cornering ABS as well as a front and rear radar system already are in the works. The next step in the project's deployment, this time, banks on vehicle-to-vehicle communication.

NOTHING AS SAFE AS SKILLS: Eight Skills to Work On as a New Rider

A few OEMs are working on making the road a safer place for motorcycles. From BMW testing a self-riding motorcycle to help push driverless technology go further, to tech company Ride Vision developing a 360-degree bike camera, there's an obvious commitment to reduce the daredevil image associated with riding a bike (both a good and a sad thing). Ducati released in April 2018 its plan to work on laser-based detection for their motorcycles. Now we know what the next phase is: C-2VX.

MORE DUCATI TECH: Ducati Wants You to Know that There's an App for That

Ducati is developing a vehicle to vehicle "communication" system. No, we're not talking about a cool name for a walkie-talkie system, but rather about cars and motorcycles "talking" among themselves. The language used would be data, using a Qualcomm 9150 C-V2X chipset. The systems installed in the vehicles on the road would exchange information with the others so that two vehicles on a crash path are able to warn the driver who can then react accordingly.

The Borgo Panigale company has already started testing, in collaboration with carmaker Audi. A Ducati Multistrada 1200 Enduro and Audi Q7 SUV and A4 sedan have already interacted during real-life interactions simulated in a controlled environment. At the moment, the vehicles are the only entities connected, however, it can be expected that Ducati's project ultimately aims at making everything connected (vehicles, road, infrastructures, road signals, etc.)

The Ducati and Audi demo is part of the Connected Vehicle to Everything (ConVeX) project that currently involves Audi, Ducati, Ericsson, SWARCO, the Technical University of Kaiserslautern, and Qualcomm CDMA Technologies GmbH.

According to Pierluigi Zampieri, Vehicle Innovation Manager at Ducati, "This is the perfect demonstration of use cases in which the modern technologies can drastically improve the safety of future motorcycle users." The maker is aiming to improve safety for riders by 2025.