An irreverent Indy Dealer Expo wrap upAs we delve into 2013, the motorcycle industry prepares itself like a boxer gearing up for another long round....

As we delve into 2013, the motorcycle industry prepares itself like a boxer gearing up for another long round. Having been sent to the mat already, the industry is still visibly shaken. But we are finally starting to land a few hits. Sales deltas are finally positive, with some OEMs doing rather well. And new products are finally being introduced again, which leads us to another Indianapolis Dealer Expo.

As an “industry insider," this is my fifth or sixth Dealer Expo. Here’s the basic rundown for what a Dealer Expo is: everybody in the U.S. powersports market that makes a product for a bike, a quad, a trike or a rider shows up to a frigid Indianapolis in February. Every hotel in downtown Indy fills up with hundreds of white males all wearing button-up crew shirts with various brand logos all over them. (The show models stay somewhere else. Not sure where, but it’s never my hotel at any rate.) Then they begin to complain about the weather.

After the first day and a half setting up their display booths, the place is flooded with dealership staff (mostly owners, GMs and dept. managers) looking at the new product and trying to get special show deals for early stocking orders. There are seminars to help dealerships learn best practices in the industry, but it’s mainly about seeing new stuff, getting deals made, and generally glad-handing your networking contacts in this rather small industry.

The real work happens each night after the Expo closes its doors. All the motorheads descend upon the various steakhouses, bar, restaurants and other steakhouses to see who can run up the biggest expense reports and get in bed with the most influential people in the industry. Honestly, this is where the actual networking happens and it’s usually good craic. You can count on a couple of good fistfights and post-fight firings over the course of the long weekend as well.

Sadly, it’s gotten a bit predicable, which is why this year is sort of interesting. A new show looms on the horizon, and dealers and exhibitors are all talking in hushed tones about this new AIM show and whether they will go to AIM or Expo next year. To make matters more confusing, the big distributors Parts Unlimited and Tucker Rocky host their own in-house shows, which further vie for dealer attention. We’re not sure what the show schedule will look like for 2013-2014, but rest assured we’ll be there in some form or another.

But because of this, it's getting harder and harder to get excited about what we see each year. Luckily this year had some cool standouts that got our attention so we figure we would round up some of them here: 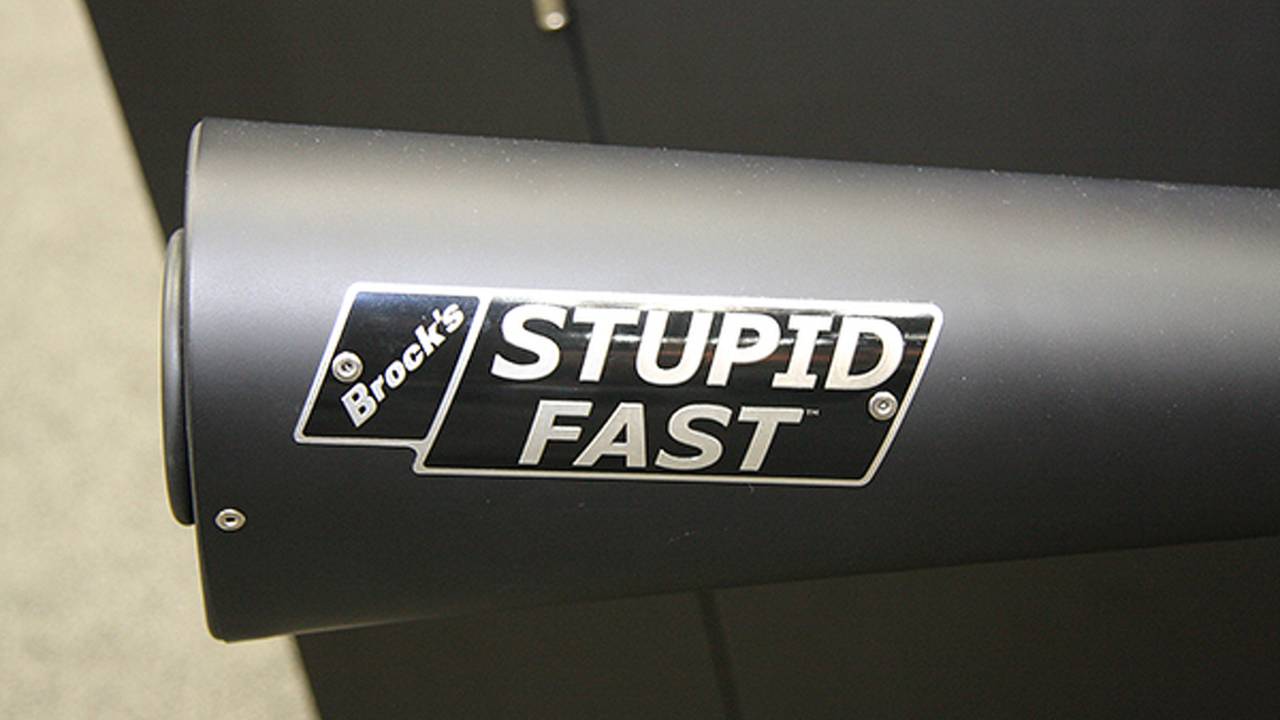 Brock's Performance is the exclusive U.S. supplier for BlackStone Tek (BST) carbon fiber wheels. If you are not familiar with BST, they are some of the lightest, trickiest, most expensive wheels you can get for your sportbike. And that's the problem. To make this upgrade easier to swallow, BST has created a new wheel that uses an insert that is interchangeable for most sportbikes on the market. This means you can invest in a set of wheels, and then transfer the wheels to your next motorcycle without having to buy an all-new set – saving a huge amount of money but still keeping the performance upgrade you’ve become accustomed to.

In a way, this sums up much of Indy 2013. There were very few all-new, highly advanced products, but instead there were a variety of products that made the most of existing technologies. We saw new compact shocks from Penske and clever new tires from Continental. There were a ton of new accessories from companies like ALTRider and Twisted Throttle. Companies like HJC, Scorpion, Shark and Shoei all brought new helmets that further refined what each brand is known for – even if they didn’t significantly improving the breed. 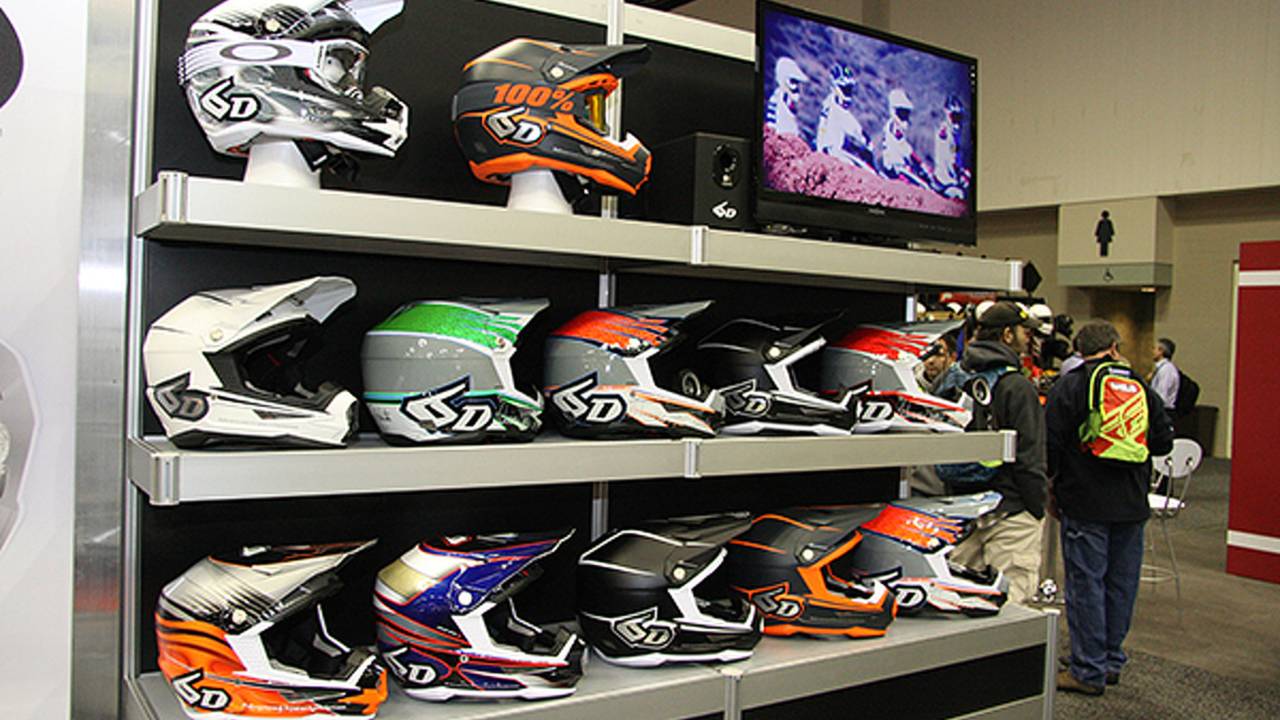 Much more than just a proof of concept, 6D will have helmets on customer heads this summer.

Two notable exceptions to the helmet rule above were 6D and Voztec. 6D helmets, as we have discussed before, have a launched a revolutionary new system that promises significantly reduced trauma from low impact speeds while still offering high-speed protection. Using a series of small dampers between two halves of the EPS, the 6D helmet isolates the head’s movement from the outer shell movement, giving crucial ‘give’ under low speed impacts, like the kind often found in the dirt or on the motocross track. A street version is already in progress, so be patient. 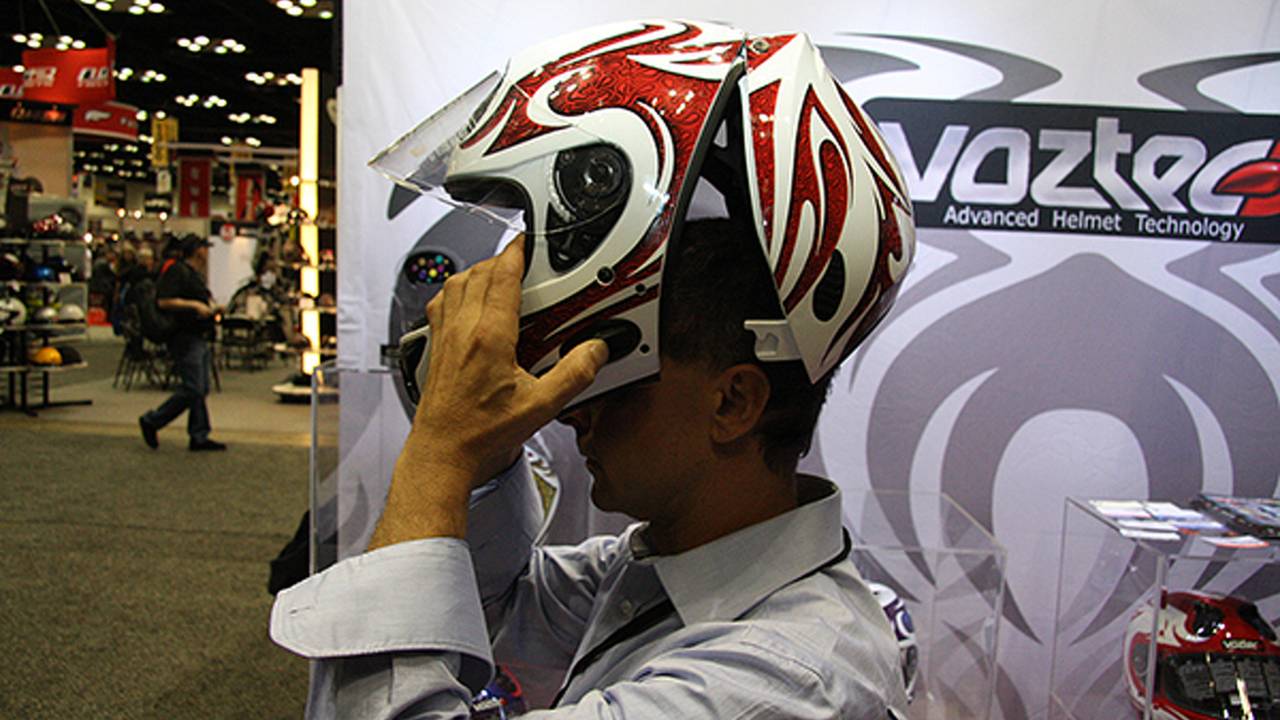 Voztec on the other hand has rethought how we put on and wear a helmet. The Voztec helmet splits in half towards the rear of the helmet to allow you to wear the helmet by slipping in via rear entry. Besides being fun to say, it allows the helmet neck opening to run very close to the rider's neck. This makes it impossible for the helmet to be removed from your head in an impact and also reduces wind noise by having a smaller opening bell area. In addition, the helmet can be removed easily in an emergency by splitting the two halves using an emergency release pin, allowing the helmet front half to be removed from rider’s face with minimum force.

What do these products have in common? Well, they were all at Indy. And second, we’ll be taking a closer look at all of them as soon as we can, so stay tuned. And as always, if there is something out there you’ve seen that you think we should check out, just let us know.