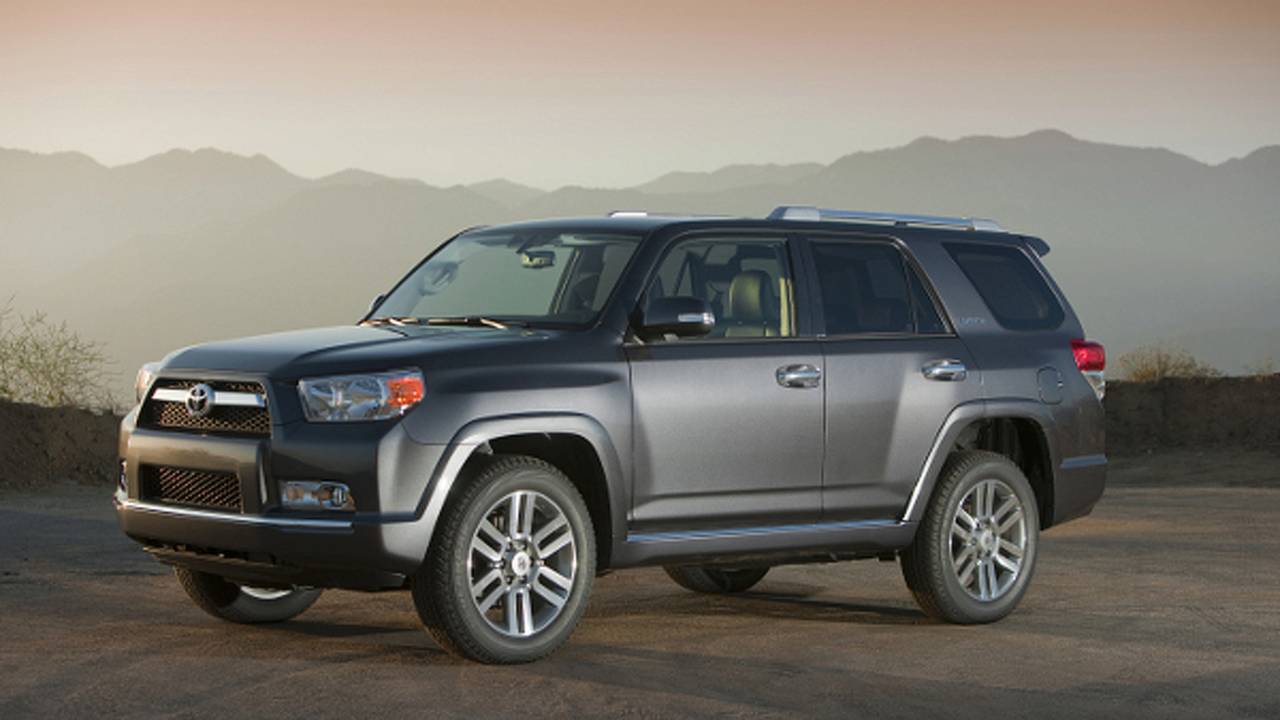 DriveApart Review: 2013 Toyota 4RunnerRideApart Overview Does anyone remember the first generation Toyota 4Runner? No, not the one with four doors...

Does anyone remember the first generation Toyota 4Runner? No, not the one with four doors but rather the one that invented the SUV genre in a rather crude manner by merely adding a top to the rear of a Toyota Pickup so that a bench seat and seat belts could be crammed back there. Rear seat passengers did have to cram their soon contorted bodies into the second row which also lacked a bit in the headroom department. It was, after all, a pick-up truck with a camper shell on top essentially. My, how times have changed.

Everything about the 2013 Toyota 4Runner screams pure and unadulterated SUV with few to no weak “crossover” undertones. This “truck” is still built on a body on frame chassis meaning that it is extremely capable off-road and for hauling cargo. Surprisingly, it also manages to squeeze an extra set of emergency foldaway seats in the ample 47.2 cubic foot cargo hold. The interior design, while blocky and very angular, suits the vehicle well and even the climate control knobs are designed to be usable when wearing thick work or snow gloves. Clever.

If you are looking for a car that handles like a Lotus or a Porsche then clearly you are in the wrong market segment here. In fact, the 4Runner corners and handles much like a pick-up truck which is to say that you don’t want to push it too hard, not even as far as you might push your average car based crossover. The 2013 Toyota 4Runner is meant to tackle the really rough stuff and come through it unscathed and there aren’t many SUV’s out there like this anymore. Sure, we may need to be more cautious on mountain roads but the payoff is an SUV that makes you feel as tough and cool as this vehicle is to the core.

Lots of cargo space available in the 4Runner.

The 2013 Toyota 4Runner comes with a maximum of 89 cubic feet of cargo capacity inside the vehicle with the rear seats folded for all of the gear you don’t want to get wet or to be exposed to the elements. Overall tow capacity is an impressive 4,500 pounds but always remember that you need to weigh both your trailer and whatever it is you are towing together. So don’t just weigh your racing motorcycles separate from the trailer and think that is all you are going to be towing. You can often find a tow scale at places like an RV or trailer retailer. Some Toyota dealers also have them on site so just ask at the service department.

To get another vehicle with three row seating, body on frame assembly and this kind of hauling toughness you might want to turn to a Chevy Tahoe. The popular 5.3 liter 335 horsepower/320 lb. feet of torque V8 allows 2WD models to tow up to 8,500 pounds. That means that this Chevy is built more like a heavy duty truck in the vein of the Silverado than the 4Runner which is capable like a smaller and lighter Tacoma. Still, how often do you need to tow over 8,000 pounds? If you aren’t carrying a giant ski boat then maybe you don’t need this SUV. Also, prices start about $39,000 so you are bound to spend more on the Tahoe.

Surprisingly, there is quite a bit of fun to be had from behind the wheel of the 2013 Toyota 4Runner and while we aren’t talking about the usual Miata-style handling thrills we are talking about a sense of imperviousness when piloting this puppy. Steering feel is not loose or wobbly like in so many SUVs or crossovers and offers a nice heft in your hands making it easy to pilot the 4Runner where you want it to go which is very important should you be maneuvering boulder filled dirt trails or backing a couple of Jet Skis into a lake.

The 2013 Toyota 4Runner Limited, like all 4Runners, is powered by a 4.0 liter 270 horsepower/276 lb. feet of torque V6 that puts out ample power for most situations you will encounter in a suburban or urban environment. Thanks to the fat torque curve, the 4Runner is also very adept at climbing steep hills and dirt trails. The engine can be a little raucous at times as it hits redline but if you wanted serenity you should have bought a Lexus.

This is pretty much the only SUV left in the known universe that still has a rear most window that will roll all the way down which completely cuts out wind buffeting in the cabin should the back seat passengers want their windows down and the front passengers want them closed. For anyone who has ever heard what wind buffeting sounds like in an SUV then this is a huge blessing to the eardrums. Also, the 4Runner has been on sale since 1984 in Japan and was at first called the Hi-Lux Surf. Good name change that happened there on the part of Toyota.

The EPA estimates that the 2013 Toyota 4Runner will return fuel economy of 17 city/21 highway in 4x4 Limited guise but we only once cracked the 16 mile per gallon mark during a long freeway cruise. No matter, this monster SUV runs on regular and you have to understand it’s a hefty beast weighing over 4,500 pounds in and of itself before any passengers or payload are added. Thankfully there is a nicely sized 23 gallon fuel tank.

View of the interior.

When you see the 2013 Toyota 4Runner from the outside it is unmistakable which SUV this is as the overall ethos of the shape has not changed much at its core since the second generation model. Given how many 4Runners that Toyota has sold since it gave this SUV four doors, it’s no wonder that it hasn’t messed too much with a successful look. It’s macho without being a caricature of itself although on the inside some of the military angularity to the dash can come across as a bit heavy handed.

For instance, must the power window switches sit right on top of the door where you usually rest an arm? And while we know that the ride height is elevated for off-road duty, lifting heavy items into the cargo hold can be back breaking work. Suffice it to say, this is no easy to live with RAV4 or CR-V. But are either of those as cool?

Our fully loaded (and we say fully worth it) 2013 Toyota 4Runner Limited 4x4 stickered for $44,395 and came with leather seats, automatic climate control, heated front seats, 7 passenger seating, in-dash navigation with Entune, Bluetooth, a power moonroof and standard tow hitch package. Other SUV to look at are the Jeep Grand Cherokee starting at $27,695 and the Nissan Pathfinder at $28,650.

The 4Runner in action.

Truly, the 2013 Toyota 4runner was the precursor (some might say forerunner if you’ll pardon the pun) to all of the pretender SUVs and crossovers that came after it. It’s built with a solidity and toughness that you just won’t find from a Hyundai Tucson. Not that there is anything wrong with a Tucson but too many SUVs nowadays are just really tall hatchbacks where as a 4Runner is an honest to goodness SUV truck ready to hit the trail or a mountain road with your bike trailer posing no strain on this legend’s mighty powertrain.