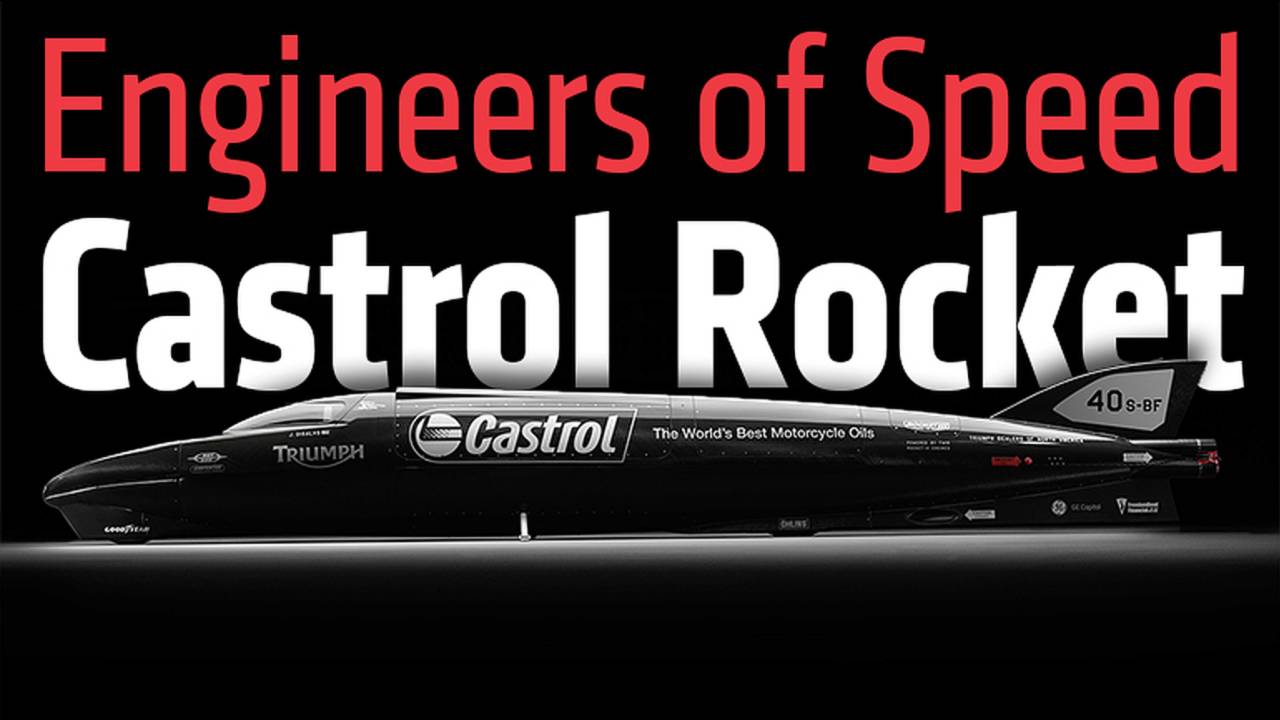 Triumph hasn’t had the land speed record in over 40 years. Powered by two Rocket III motors, this Castrol Rocket is meant to change that.

It may have the name “Bonneville,” but Triumph hasn’t had the land speed record in over 40 years. This Castrol Rocket is meant to change that. Powered by two Rocket III motors, it could return “The Worlds’s Fastest Motorcycle” title to England. But, what does it all mean?

The Bonneville Salt Flats have been the sacred ground of speed since Ab Jenkins set the 24-hour speed record in 1935 in the Duesenberg “Mormon Meteor.”  Generations of odd-looking, streamlined one-offs have thundered across that shimmering, white expanse ever since.

In our imagination, the glory days of Bonneville were the 1950s and 60s, when home-built hot rods met high-tech engineering.  These were the days of breaking sound barriers and tiny silver space capsules.  We were building the first ships powered by nuclear reactors, but we could also still remember cowboys roaming the plains.

It’s a mythology too beautiful not to capitalize on.  BMW did a popular ad for their M5 a few years ago featuring a Bonneville racer.  Indian unveiled their custom “Spirit of Munro” this year – not a replica but an homage to Salt Flats hero Burt Munro.  It’s a clever way to leverage Indian’s most famous, pluckiest rider; it won’t set records, but it isn’t meant to.  It’s meant to evoke that mythology and make it as part of the Indian brand.

Triumph now has the Castrol Rocket, which is powered by twin Rocket III engines and is intended to set a record.  Triumph still puts “World’s Fastest Motorcycle” on vintage-style patches and t-shirts, but that hasn’t been an actual fact-type statement for over 40 years.  Seems they want to get that claim back.  Hard.

But how much does it matter?  How many people really care if the brand they ride is also the brand that currently holds a specific land speed record?

Consider that the Triumph in your garage really has nothing at all in common with the Castrol Rocket, any more than your Kawasaki is related to the Kawasaki XC-2 cargo plane.  You don’t judge your buddy’s Yamaha based on the quality of their pianos.  There’s nothing in common but the name, really.

Remember, too, that speed records are divided into very specific classes.  For example, the two Rocket III engines in the Castrol Rocket had to be sized down to keep the total displacement under the class-required 3,000cc.  Speed records would be much less interesting and meaningful without these classes, and so each record is a very specific type of record, except for the overall land speed record, which no internal-combustion powered machine is going to make.

We’re not trying to dismiss these speed bikes.  No, no, it’s that the significance lies somewhere other than in what brand holds what record.  They’re actually doing something – perhaps inadvertently – much more important.

Engineering is hard.  It takes patience, discipline, and math.  It involves a lot of failure.  It is also completely amazing.  The more of that amazing quotient we can see, the better.  We want to see engineering that inspires us.  Machines that are beautiful, fast, and breathtaking.

We fret – rightfully – about not enough American students opting to study in the STEM (Science, Technology, Engineering, and Math) disciplines.  Standardized testing won’t change that.  They need to see the inspiring side of technical design.  Not every engineer works on speed record bikes, but they do work on solving real problems.  They create.  Not every architect is Antoni Gaudi; it is the inspiration that matters.

It’s easy to be cynical about the Spirit of Munro and the Castrol Rocket.  Yes, they are commercial endeavors, and the purpose is to promote a brand.  But they are also just beautiful, fast machinery.