10 Most Important Motorcycle Developments in 2013 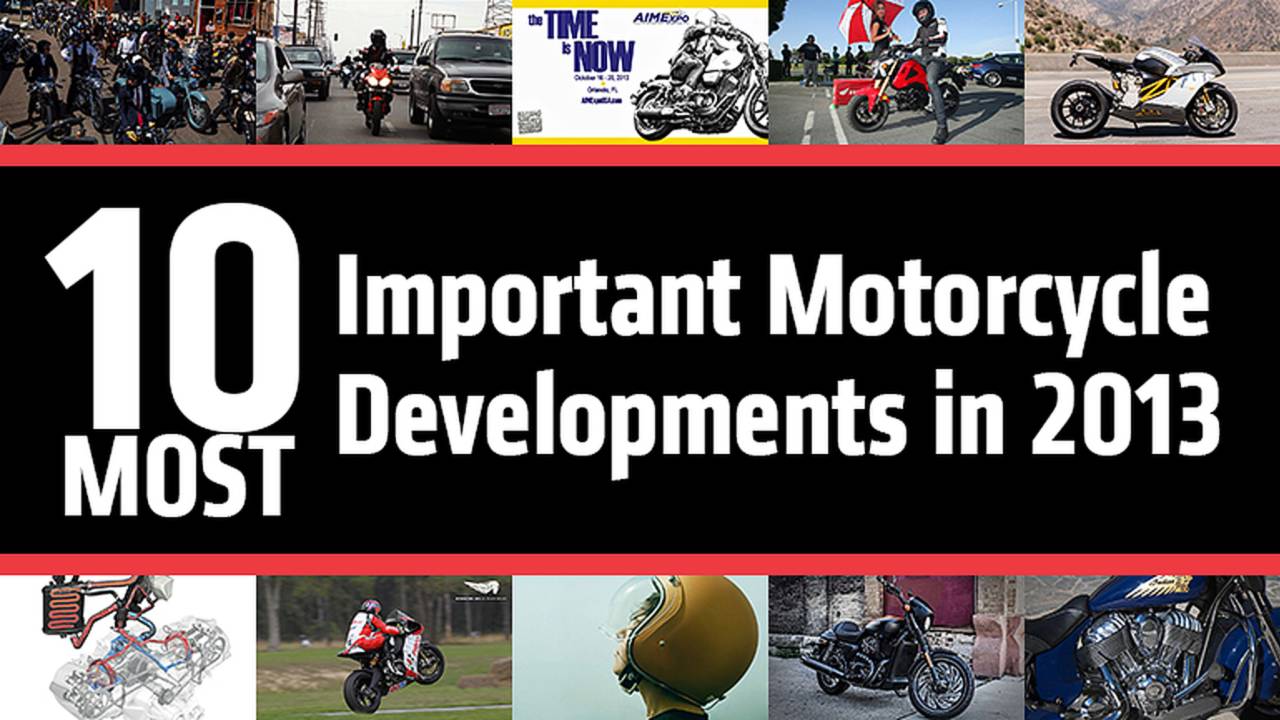 From the distinguished gentleman’s ride to the new Indians, find out what advancements made the most impact.

There were a few big stories that you couldn’t miss this year, stories which portend new directions for the industry. There were others that slipped by almost unnoticed, but which nevertheless indicate important trends or tell us something significant about what it mean to be a rider today and tomorrow. Here are the ten most important motorcycle developments for 2013.

Charity rides are nothing new, but we love the connection between a social riding event and men’s health, and the hook of the classy dress is delightful. It’s also progressive that it’s not just cruisers, or rockers, mods, or whatever, but all types of bikes and all types of guys, including a big contingent of young men.  Most of all, the fact that The Distinguished Gentleman’s Ride popped up and had participation in 38 countries and exceeded its fundraising goal in the first year is remarkable.

Lane-splitting is legal in California, and it can be done in a “safe and prudent” manner, but it still needs to be legitimized in the minds of many drivers (and riders). The CHP’s guidelines for safe lane-splitting helped establish that legitimacy, as well as just providing some solid advice for filtering in a way that won’t get you killed or anger drivers.  The AMA (the motorcyclists, not the doctors) endorsed lane-splitting too, so maybe this is something we will see in more states in the future.

Why did it take this long for there to be a comprehensive American motorcycle industry expo?  I think there’s still a sense here that the motorcycle industry isn’t really a serious entity. Well, it’s approaching $100 billion worldwide, and the rest of the world takes it pretty seriously. The AIMExpo is an important step in the right direction, let’s hope it gets even bigger next year.

Small is beautiful.  Sometimes ugly is beautiful, too.  Riding is supposed to make you smile, but sometimes we take ourselves way too seriously. The Grom brings back that sheer delight in an accessible, affordable, reliable package. Plus, you’re guaranteed to get more positive attention from the opposite sex on a Grom than on a $20,000 FatGlide.

Young potential riders are often very interested in electric bikes, mainly because they are eco-conscious and interested in tech.  Now there is a new reason: ungodly performance.  What may be the best-performing sportbike in the world is now an electric bike – the Mission RS.  Yes, it has the price tag of a super-exotic, but this is the milestone that sneers at all the doubters.  And, oh yeah, it’s designed and built in the U.S.

With ever-tighter emissions standards and ever-increasing demand for engine longevity, reliability, and performance, the march toward water-cooling is inexorable. Even the venerable boxer engine, that icon of air-cooled design, is starting to get water-cooling. The question is, how much longer will those cylinders need to stick out in the breeze?

This is significant in two distinct ways. First, it is emblematic of the importance of the emergence of South Asia as a global motorcycle player (see more on this in #2 below) – not just as a new consumer market, but as manufacturers, designers, and, yes, investors. Second, it means that Erik Buell has major investment backing and stability, but still maintains majority control of EBR. So, that elusive American sportbike is becoming a reality. With the sub-$20K 1190RX, they are now offering something a mortal might buy.

This exhibit at the Riverside Museum in Riverside, CA, features the photography of Lanakila MacNaughton who aims to, “document the new wave of modern female motorcyclists.”  In a subculture where women are still often seen as accessories, this is an important statement and recognition of the growing role of independent women in riding culture. It’s also an example of the growing trend of art, music, fashion, and motorcycle events coming together.

The “more is more” mantra of the nineties is finally fading, and the Street 500/750 is an acknowledgement that we need more riders who are younger, more diverse, and not always rich. This is a bike that is lighter, less expensive, and easy to get started on, while still being a fully capable motorcycle.  It also happens to be well suited to that vital South Asian market.

No new motorcycle release in our lifetime has been met with such anticipation as the 2013 Indian Chiefs.  After so many failed attempts, this, the most romantic of motorcycle brands, is now in the hands of a highly capable American company with plenty of capital, who were able to create an entirely new machine in just over two years. These sumptuous, neo-deco-styled bikes did not disappoint the legions of Indian fans and are sure to sell. Given the expectations and their goals, Polaris Industries hit a homerun with this one. The important question is, what will they do next?  Is this going to be just another cruiser company (The Cadillac to Victory’s Buick), which we really don’t need, or are we going to see the evolution of a full line of motorcycle products bearing the Indian badge? If it’s the former, they’ll just take part of Harley’s lunch. If it’s the latter — and there are hints that it is — then this changes the whole game entirely.