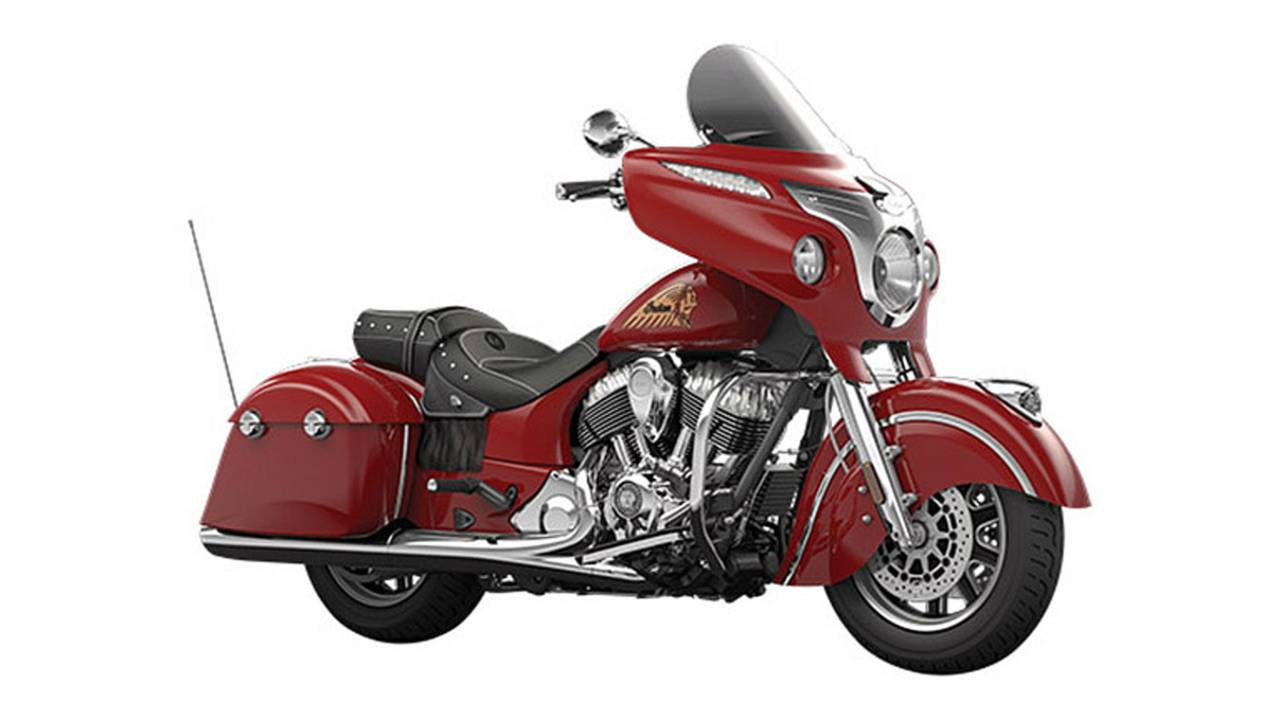 Indian Motorcycle, owned by powersports conglomerate Polaris Industries, which also has Victory motorcycles in its portfolio, began a viral marketing campaign earlier this year with series of ‘sneak peek’ looks at its new Indian Chief motorcycle. Everything from the Chief’s engine specification to the retail pricing was revealed over the ensuing months with the exception of the actual bike itself.

The trio share the same cast aluminum frame and the same all-new 111 cubic inch, 49-degree v-twin, Thunder Stroke engine. Indian Motorcycle claims this unit produces 119lb-ft of torque but, as of yet, there is no official horsepower figure for it. And, as a nod to the past, Indian Motorcycle has included some retro touches on the Thunder Stroke unit with similar cylinder cooling fins and parallel pushrod tubes reminiscent of engines from 1940s Indian motorcycles.

Entry into the Indian Chief Motorcycle range starts at $18,999 for the Chief Classic. For that you get a motorcycle which looks similar to Indian models from the past. This is because there’s valanced front and rear fenders covering the brake calipers, the iconic ‘War Bonnet’ light (an art deco styled running light in the shape of an Indian chief head mounted on the front fender), tear drop tank and leather saddle. There’s also a ton of chrome as you would expect and on the Classic’s tank (and on the Vintage and Chieftain) there’s the famous Indian script logo that was first used on its motorcycles back in 1910.

The equipment levels on the Chief Classic include keyless ignition, ABS, cruise control, throttle-by-wire and a tank-mounted console that includes both analog and digital displays.

Next step up is the Indian Chief Vintage at $20,999. This is the soft bagger in the line-up and, for that, you get the same traditional Indian styling cues and equipment levels of the Classic, but also whitewall tires, a quick release windshield and leather saddlebags and tan leather fringe for the saddle.

At $22,999 is the Indian Chieftain – the Indian Motorcycle flagship. This is the hard bagger of the range and features a fork mounted fairing with integrated driving lights and LED turn signals.

The Chieftain’s hard fairing incorporates a windshield that is power-adjustable to improve airflow and rider protection. There’s also a comprehensive digital instrument layout that includes tire pressure monitoring, an audio system with speakers and integrated Bluetooth smart-phone connection. The hard bags on the Chieftain are quick release and feature remote electric locks operated by a console-mounted button or on the key fob. The Chieftain also has the same specification of ABS, cruise control, throttle-by-wire as the other two Chief models.

Despite the inclusion of that ride-by-wire throttle, there's no traction control or switchable riding modes. Both of which are employed to great effect by the cheaper Moto Guzzi California 1400.

In line with the introduction of the new Indian Chief, Indian Motorcycle is currently increasing its dealer network around the world and in the U.S. By the end of this year it’s planning on having between 125-140 Indian Motorcycle dealers in North America and 70 international dealers around the globe.

The 2014 Indian Chief can be ordered now and will be in dealer showrooms this September along with apparel, parts and accessories. Test rides will be available later this month at dealer events across the country.