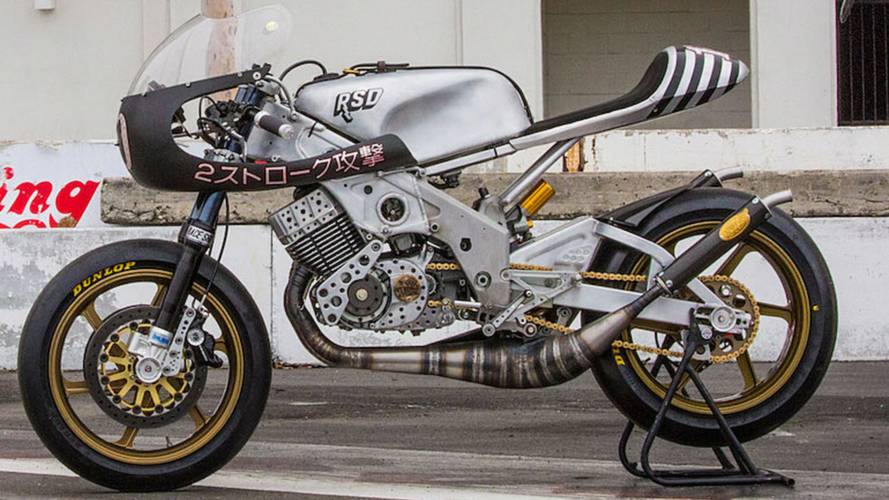 Roland Sands and his team deliver a stunning street-legal two-stroke machine that just does everything incredibly.

Roland Sands took a '74 Yamaha RD400, a handful of bespoke parts, and a lifetime of experience, mixed 'em up, and built a truly one of a kind oil burner.

I know this is another Roland Sands build, but I love everything about this bike. If you’re unfamiliar with the term fit and finish, this bike is the textbook example of incredible fit and finish and demonstrates the kind of meticulous attention to detail that separates legendary shops and builders from your average local wrencher. The construction, welds (that exhaust though...), paint, metal fabrication, and overall quality on this racer are simply remarkable. This build is not only blatantly a custom, but it’s undeniably different and distinctive as hell.

“Hopefully its something that's new and unique that people haven’t seen before,” Sands said about the street-race hybrid.

Roland Sands Design employs a design team that is responsible for some of the custom RSD bikes you see (as well as performance parts and clothing/gear), but this bike was a product and vision of Roland himself. He did the majority of the fabrication and build work solo, with some help from said team including Aaron Boss and Scotty Diminick. He had a seriously ambitious plan for this build that included all kinds of feats that by themselves would have been pretty impressive.

“I’m probably only going to build one of these so I want to make the bike nice ya know? I kind of want to build my ultimate version of this bike,” he said.

In addition to drawing from his own extensive collection of rare parts accumulated over the years, components were sourced from all over the world including genuine vintage OEM parts, pieces from the Team Roberts Racing garage, and several beautiful one-off parts for this build such as the reproduction fin-heads and engine work.

“Yeah it’s a really nice head, for the parts I’m looking at it going ‘Oh my God I’m spending that much money on these parts,” Sands said when showing off one of the magnificent custom parts.

After getting his hands on everything this aspirational build needed, Sands personally got to work on the engine. He rebuilt the 1974 Yamaha RD400’s air-cooled 399cc two-stroke straight-twin engine and then brought it to Ed Erlenbacher, a renowned tuner of the smoker. Sands then squeezed the tuned power plant into a redone chassis from a smaller ’97 TZ250, a frame that Sands calls, “Probably the best chassis ever built.”

The TZ250 is of personal significance to Sands. Having won the 1998 AMA 250GP National Championship and the first bike he ever owned was supposedly a TZ250 so these machines clearly hold a special place in the iconic builder and designer’s heart. When talking about two-strokes, Sands mentioned that they smell like racing to him.

The TZ250’s weight is in the sub-250lbs range. Though the vintage 400-engine definitely adds weight, the removal of its water pump and radiators help to balance that out a little. This bike is teeming with Grand Prix racer DNA and does a tremendous job of fusing the 500cc two-stroke era character with touches of the modern custom scene. While Sands clearly wanted to keep weight down to an absolute minimum, he still had to balance this with keeping the bike streetable while maintaining its racing heritage.

“I’m not gonna say it’s a race bike, but it’s as close to a streetable race bike as you can really get,” Sands said on the subject.

As you’d expect (if the pictures haven’t given it away), the parts used to make up the sum that is this extraordinary build are all pretty rare, top-shelf, or trick. In addition to a rear Öhlins mono-shock, the Öhlins fork used on this Yama-hybrid is clamped with vintage Team Roberts triple clamps. The six-speed dry clutch kit found on this example is made up of vintage OEM TZ components as well as “parts from around the globe.” Ralph Ponce - an established name in the RD community - is responsible for the Webco heads on this machine. Further reducing the weight - while simultaneously keeping the center of gravity lower - is the bike’s (stock) gas tank and hand made tail section are composed of raw aluminum. In addition, the upper-fairing is made of carbon fiber and is fitted with one-off aluminum “brackety”.

The lightweight custom sits on a pair of Performance Machine magnesium race rims that were sourced from Sands' very own championship winning 250 GP bike, and they're wrapped in a set of Dunlop slicks. The paint and pin striping was hand-painted courtesy of The Undertaker, and the bike's name – 2 Stroke Attack – is painted on the fairing in Kanji with silver leaf paint.

Sands built this bike because he got invited to build a bike for the seventh annual Born Free Motorcycle Show in Orange County, CA. Instead of joining the ranks of custom Harleys, he took a more novel approach that’s equal parts fun, nostalgic, bad-ass, and beautiful. Born Free threw together a cool five minute video of Sands talking about two-strokes and building this bike that's worth a quick watch, and RSD made a video for the Two Stroke Attack as well that’s even cooler.

I can keep talking about this bike for hours, but ultimately the pictures speak for themselves. The close-up shots reveal all kinds of unexpected highlights and noteworthy features. (You can check out a bigger collection of large hi-rez photos of this build here on the RSD website.) Again the level of attention to detail and overall fit and finish on this one are straight up insane. I promise this will be my last RSD build for a while, regardless of the fact he has a Scout Bobber custom being unveiled at the Brooklyn Invitational Motorcycle Show in the next few weeks.

If you’ve got a noteworthy two-wheeler in your garage or yard that you feel deserves to be RideApart’s next bike of the week, drops us a lines at info@rideapart.com