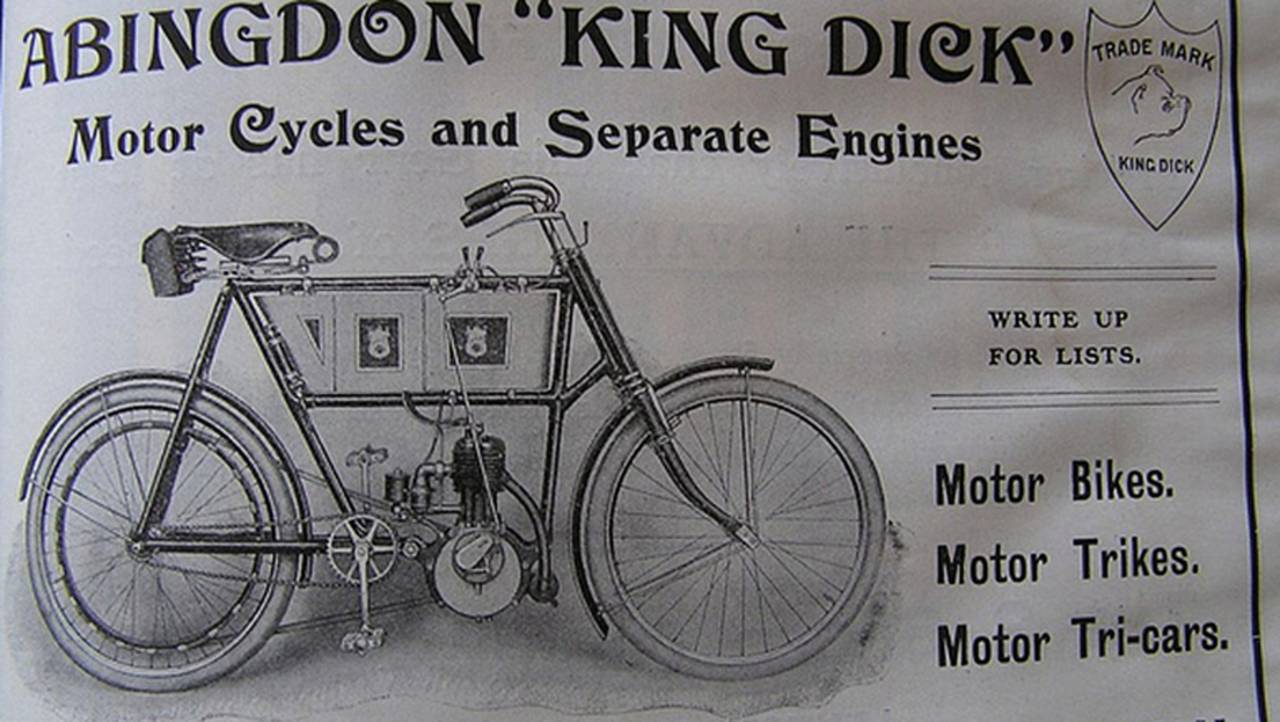 Many of today’s motorcycle manufacturers spend a lot of time, money and effort researching names for their new bikes. There are consumer groups and market evaluation and demographic studies all created to ensure that whatever the final version is called, it reflects the brand, offends nobody and is easily understood. Here's some that didn't work out so well.

In return we get some pretty average motorcycle names or, in most cases, just numbers on a new bike, as we now live in a carefully manipulated, homogenous world where conformity is everything. There just doesn’t seem to be much room anymore for eccentricity in bike names.

That I think is a real shame as there have been some truly tremendous motorcycle names that are so off the wall, either because the marketing men were taking something highly illegal in the creative process, or there was a real naivety on their part as to what they were doing. I like to think it was probably a combination of both.

You can’t just point the finger at the Japanese or Asian manufacturers for coming up with weird names, because here in the U.S. and in Europe there were some truly mind-boggling names for bike companies with some of them calling their motorcycles very, very strange things.

My all time favorite is Abingdon Motorcycles, a British concern, which produced in the early 1900s a series of really innovative and well-engineered bikes, developed telescopic suspension and supplied big four-stroke engines to the likes of Invicta and Ariel.

But, in 1926, some bright spark decided to re-name the company and all of its bikes. So, for the next seven years you could buy a selection of 147cc to 350cc motorcycles called the “Abingdon King Dick.”

I am not sure, but in ultra-conservative 1930s England, going around telling everyone you had a King Dick was probably not considered good form.

Unfortunately, like all good things, King Dick motorcycles came to halt and the firm, which is still in business today, sadly went back to just machining and manufacturing what it felt it was best at, “King Dick Tools.”

Then there are some names that make me scratch my head and ask what on earth where they thinking? Hodaka Motorcycles of the 1960s was a joint Japanese and U.S. business concern that cashed in on the then new off-road motorcycle craze. By all accounts it made some pretty decent bikes that are still much prized today.

Back then in the late 1960s, if you were prepared to hand over your money, you got to choose from the Super Rat, the Road Toad, the Thunderdog, the Dirt Squirt, the Wombat, the Combat Wombat and the Super Combat.

I am not sure of the differences between any of them but they all sound simply terrific. But precisely who in the Hodaka marketing department came up with these names and why and more importantly I want to know who signed them all off as great ideas?

The Italians surprisingly have played it pretty straight-laced with the names of their bikes over the years, but they did go down the route of trying to attract the American market and we ended up with the Ducati Indiana, the Aprilia Shiver in 2009 and the Cagiva Elefant Lucky Strike. I’m still looking for an alleged Bimota Midwesterner that a friend of mine swears exists.

Who can forget the Suzuki Tempter? This was the launched in 1983 as the GR650 but for some inexplicable reason the Japanese decided to rechristen it the Tempter just for the U.S. market. Honda as always has played it safe. There was though the DN01, an automatic big tourer that was not hugely popular and which some wags swiftly christened the “Don’t Own One.”

At the turn of the century in the U.S. you could buy a Thor motorcycle, which I think is a great name for a bike. The company originally supplied engine parts to Indian motorcycle before going into making its own bikes and then rapidly going bust. Flying Merkel was another that started out well and was considered a serious alternative to Harley-Davidson in the early pioneering years of motorcycling. Fast, strong and very well built but unfortunately it went the way of Thor as well.

You used to be able to buy a Genial-Lucifer in France in the 1920s and there was also a French brand known as the New Motorcycle, which I am sure caused problems when people asked you what bike you rode. Over in Germany you once had the choice of a Snob, an Anker or a Stahl. Sadly all gone now. As too has the Satan Motorcycle Company in Czechoslovakia along with Belgium’s Lady motorcycle.

Perhaps all of these names disappearing form motorcycles is a good thing. Some of them today do sound pretty ludicrous. Suzuki found this out no so long ago when it launched the Gladius SVF650 and then realized as a name it was never going to take off and this year reverted back to calling it the plain SVF650.

However, I’m told there is a scooter somewhere out there called the Smash – but just available in Asian markets - along with another that’s called the Giggle. Now those are two on my list of weird motorcycle names that I am definitely going to have to find.