On The Road To Nowhere - Why We Ride Endless Miles 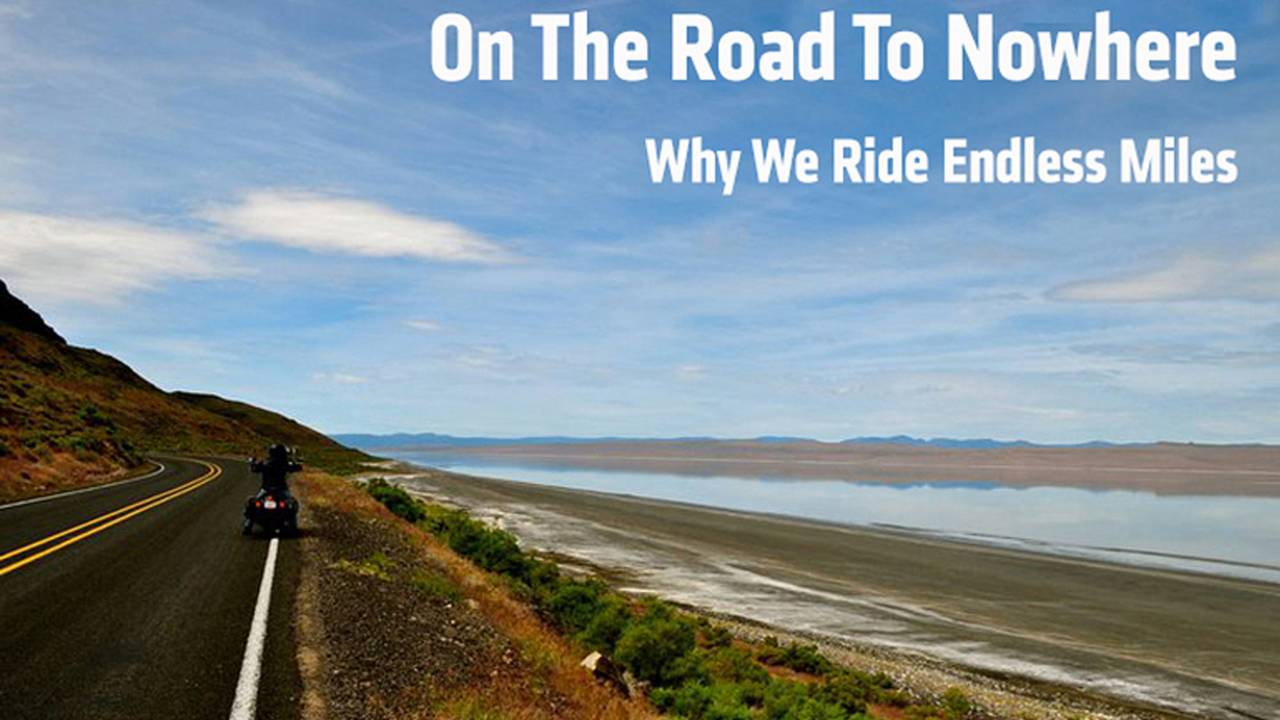 Ever get the urge to get on your bike and just ride for the heck of it? Here's why we ride endless miles on motorcycles.

Ever get the urge to get on your bike and just ride and then ride some more and just keep going for endless miles? If you’re like me, you’ll end up so far away from home that you’re completely lost and strangers will look suspiciously at you and say: “You’re not from round here are you?”

It actually took me a long time to throw caution to the wind and do this. I’d spent years finding every mundane excuse why I shouldn’t go and ride as far and as long as I possibly could until, one day, I couldn’t stand it anymore. I locked up the house, told family and friends I was going away, and I never looked back.

Over night, I changed my daily routine into getting up before the sun rose and pointing my motorcycle in whichever direction I happened to like the look of. And that’s how I ended up on a remote, empty desert highway, somewhere either in Nevada, Arizona or it may have even been Utah. I was filthy dirty. My bike was even dirtier. I was out of drinking water and also out of gas. And do you know what? It was one of the best experiences of my life.

For once, I was master of my own destiny, and was actually enjoying figuring out how I was going to find some gas in the middle of nowhere and get going again, while all the time a couple of optimistic vultures circled over my head.

Apart from my own stupidity of trusting my bike’s fuel gauge, the reason why I ended by the roadside in an empty desert was all because of a ridiculous 1970s film called Easy Rider. As a kid I had an enormous poster of a still shot from the film of Peter Fonda riding his bike with a huge, wide open desert sky behind him. I would spend ages gazing at that poster, promising myself that one day, when I was old enough, I too would get on a motorcycle and ride into small town America to discover what was really there.

It took me a long time to finally seize the moment and while it may seem like a crazy man’s dream and throwing logic and responsibility to the wind, I was a fortunate enough to find a publisher that was interested in taking my experiences and turning it all into a book that would, one day, be published.

There was one big drawback in all of this. I have an appalling sense of direction and, despite studying enormous maps of the U.S., most of the time I had absolutely no idea where I was, where I was going or what I would find. But the former was probably the best part of all. To travel on a bike not knowing what’s precisely around the next corner was and still is the motivation for me to ride.

I traveled really light with just one extra t-shirt, a small bag of tools, a toothbrush and a map that I would occasionally glance at. There were no rules except that I wanted to stay away from freeways and ride the empty roads that seem to run nowhere and pass through towns with curious and compelling names. I budgeted enough money for gas and food and to stay at the cheap motels I found along the way.

The riding was spectacular. Every single mile of it. I still remember a section in Nevada where I had a highway entirely to myself for almost two hours. I saw nobody, not a car, not a truck or a single living thing and just rode my motorcycle towards the distant horizon.

Some days I’d ride up to 400 miles, following two lane roads that snaked through mountains and dark forests and across flat empty plains that seemed to go on and on forever. I’d go from freezing, snow-covered hills to 100-degree heat in the deserts below. I got rained on and, once, was so cold that I had to get off my bike to try and warm my hands on my bike’s engine cylinders.

I saw things that I never imagined in a hundred lifetimes that I’d get to see. I met some pretty crazy people too. But you know what? I never met a single soul who wasn’t friendly or interested in what I was doing so far away from home on a motorcycle.

What I hadn’t anticipated when I set out on this odyssey was just how big America is. This country is immense. What looks like a simple couple of hours jaunt between two towns on a map often turned into a full day’s riding of more than 300 miles.

I know where I went for the most part of this long journey and the astonishing things I saw and did. But, there are some gaps in my memory as I was literally riding from dawn to dusk. Not that I am complaining. To ride a motorcycle all day on some of the greatest roads I have ever seen, with occasional breaks to fill the tank with gas and grab something to eat and drink, is something I’d happily do for the rest of my life.

In the space of six weeks I managed to traverse eight states and covered more than 8,000 miles. On occasion I took my time and slowed the pace down so I could see as much as I could in case I never came that way again.

More than anything else from this entire experience I learned how to ride a motorcycle. Before I set off I was probably a very average rider. But when you’re out on the road, thousands of miles from home, it’s down to your decision making whether you ride through a thunderstorm or opt for 50-plus miles along a dirt road. I also learned a whole lot along on the way and about my bike.

Sure there were times when I would have gladly got off my motorcycle and walked away. Baking in the desert heat on an air-cooled V-twin is no fun. Being cold, wet, tired and often completely lost played havoc with my mind.

But above all I kept reminding myself how lucky I was to be doing this on a motorcycle. Not only that, I was riding across one of the greatest nations on earth. I guess you could say by my getting on a motorcycle and riding for the love of it mile after mile, I got a true sense of what being free means.

What's the best place you've ever ended up?