How Does Motorcycle Traction Control Work?

Traction Control is the latest must-have on performance motorcycles, helping manage unprecedentedly huge HP numbers and adding safety. Here is how it works.

Traction Control is the latest must-have on performance motorcycles, helping manage unprecedentedly huge horsepower numbers and adding safety in poor conditions. But how does motorcycle traction control work? Here’s a detailed explanation that anyone can understand.

Traction control was brought about in an attempt to curtail vehicles from exceeding their available traction. As with many technologies such as fuel-injection and antilock brakes, traction control is finally coming under the umbrella of tech to expect with a new motorcycle purchase. At present we’re seeing the technology follow the same trickledown effect from top race classes and race replicas down to the smallest budget oriented models. It’s a boon for motorcyclists of any distinction. But how does it actually work? 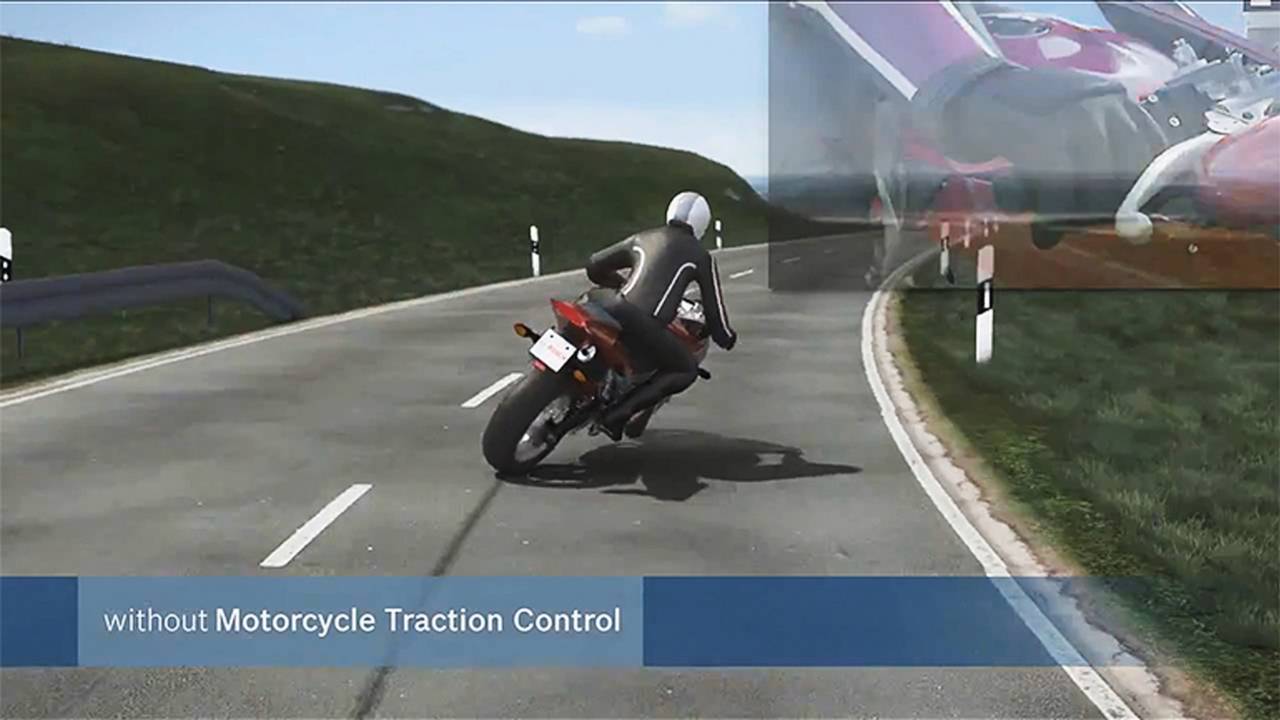 Our motorcycles have just a few square inches of contact to the road surface via our tires. Road surfaces can be wet, dry, sandy, hot, cold, freshly paved, cracked, uneven, slippery, or covered in leaves, fluids, or foreign materials that change the amount of traction our tires can utilize. Our tires can be old or new (with traces of slippery mold release agents), improperly inflated, or have uneven wear. Traction control helps to mitigate loss of traction from all of these factors, as well as excessive application of throttle or other input errors on the part of the rider. No matter what the circumstances, the common denominator among all of these factors is a difference between rear wheel speed and front wheel speed.

So how do we get an accurate sense of wheel speeds? We repurpose the ABS sensors that are already monitoring them. We’re specifically concerned with the rear wheel speed in relation to the front. When the rear wheel is unable to maintain traction through its contact patch, it slides, and the rotation of the rear wheel no longer matches the rotation of the front wheel. The sensors relate this information to the bike’s ECU. Since the ECU controls fueling and engine speed, it already knows the amount of power the bike is delivering to the rear wheel. In some cases, it also registers throttle position, gear position and even lean angle. With the combination of wheel speed sensor data and engine speed data, the ECU can make a determination on available traction, and trigger one or more responses (which varies between motorcycle manufacturers). 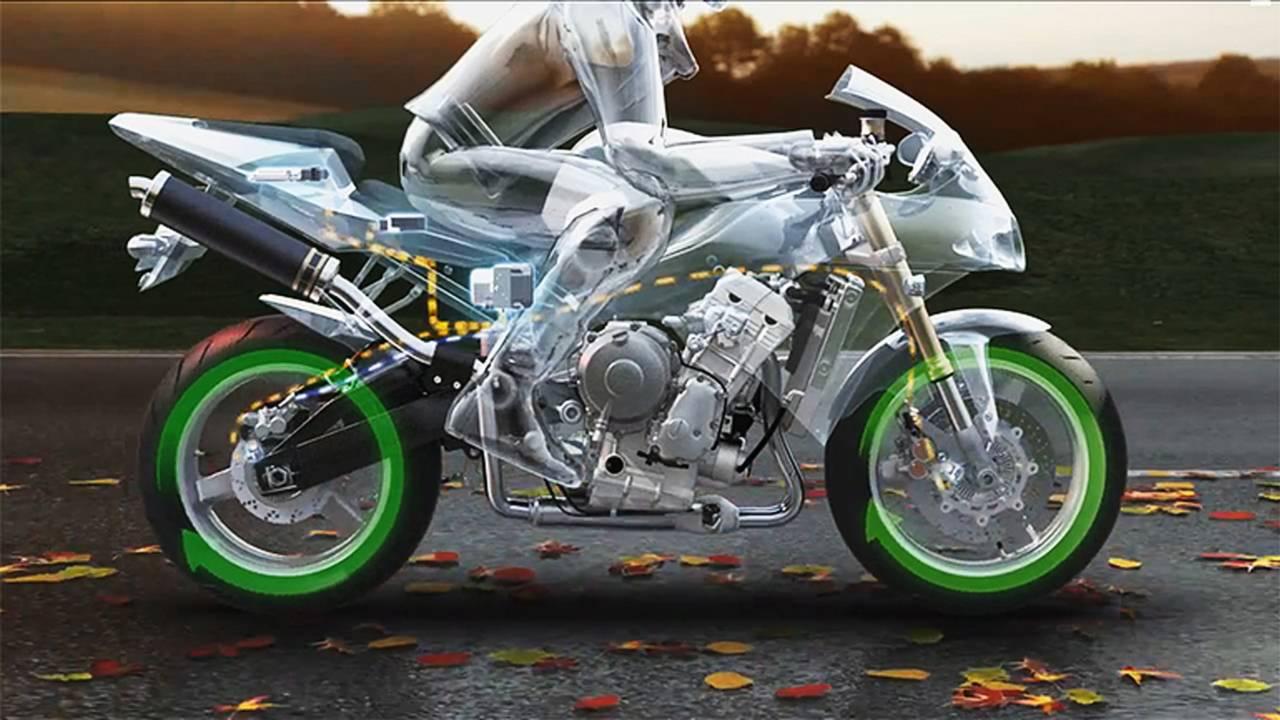 At least one of three things will happen as the ECU attempts to prevent rear wheel slip : 1) retard the ignition timing, 2) skip fuel injection on a single cylinder, thereby intentionally creating a misfire, or 3) electronically adjust the throttle (assuming the bike is fitted with an electronic throttle). All of these events culminate in the same result, wherein engine output is modulated carefully so that traction is regained with smoothness and a maximum amount of efficiency. All the manufacturers choose the way the ECU intervenes differently. Aprilia and BMW TC retards ignition timing and electronically adjusts the throttle. Ducati TC retards ignition timing and uses cylinder misfires. Kawasaki TC only uses cylinder misfires. Yamaha TC uses all three, by retarding ignition timing, using cylinder misfires and adjust the throttle as needed.

While all of this is possible using wheel sensors and an ECU to interpret the information properly, some manufacturers take their traction control a step farther. Ducati’s DTC relies on a separate ECU with an accelerometer that measures lean angle and acceleration. Aprilia and BMW bikes have multiple accelerometers and gyroscopes to give a more complete picture of what the bike is doing. The advantages of which can provide additional electronic assistance such as launch control and wheelie control. Most aftermarket traction control modifications and manufacturers like MV Agusta do not use wheel speed sensors to detect rear wheel slip. Instead the ECU checks rpm spikes against a set of known values based on engine speed, throttle, and gear position to determine rear wheel slip to provide a corrective measure.

Imagine riding along your favorite mountain road and midway through a corner you give it a bit too much gas. Your finite level of traction for the rear wheel is used up and the real wheel is about to start sliding. Without traction control, several possibilities present themselves. If you maintain or increase throttle, you’ll probably exacerbate the loss of traction and continue to slide. If you chop the throttle, the abrupt transition the tire must make to regain traction and maintain the inertia of the bike can be sudden and potentially dangerous. The final option is to perceive the rear wheel slip, and quickly react by carefully managing throttle input to safely regain traction.

Most of us have not yet attained the skills or reflexes to properly respond to a sudden, major loss of traction. Even on our best days our ambition can easily fool us into overestimating our natural abilities.

With traction control, the ECU is automatically correcting for rear wheel slip as it starts to happen and reevaluating to correct every few milliseconds. The result is a smooth transition back below the threshold of traction and further correction to prevent it from being exceeded. These actions occur not only in the middle of a corner, but starting off from a stop too quickly, encountering a sudden change in road conditions, or on wet manhole covers/steel plates and the like. In most cases, traction control comes with various tiered modes for different styles of riding. These range from settings with a more aggressive intervention for commuting or touring, to ones explicitly meant for racing that only intervene under the most obvious cases of unintentional rear wheel slip. One can even turn it off entirely if the need arises.

It goes without saying that traction control is in no way a replacement for competence, wisdom, or experience in riding. It is a riding aid, one which provides the opportunity for mitigating risk in street riding and safer attempts at exploring the outer limits of a bike’s capabilities at the track. Traction control has made significant strides since its first application in a production motorcycle in 1992. In fact, we’re just a few years short of traction control becoming ubiquitous among the full model ranges offered by global motorcycle manufacturers, and it is no longer relegated to the singular purpose of safety. With improved heuristics and algorithms it will only continue to get better at reacting to motorcycles being pushed to the ragged edge of adhesion.

Does your bike have Traction Control? How has it helped you?

By: Braden Poovey
++
++
Got a tip for us? Email: tips@rideapart.com