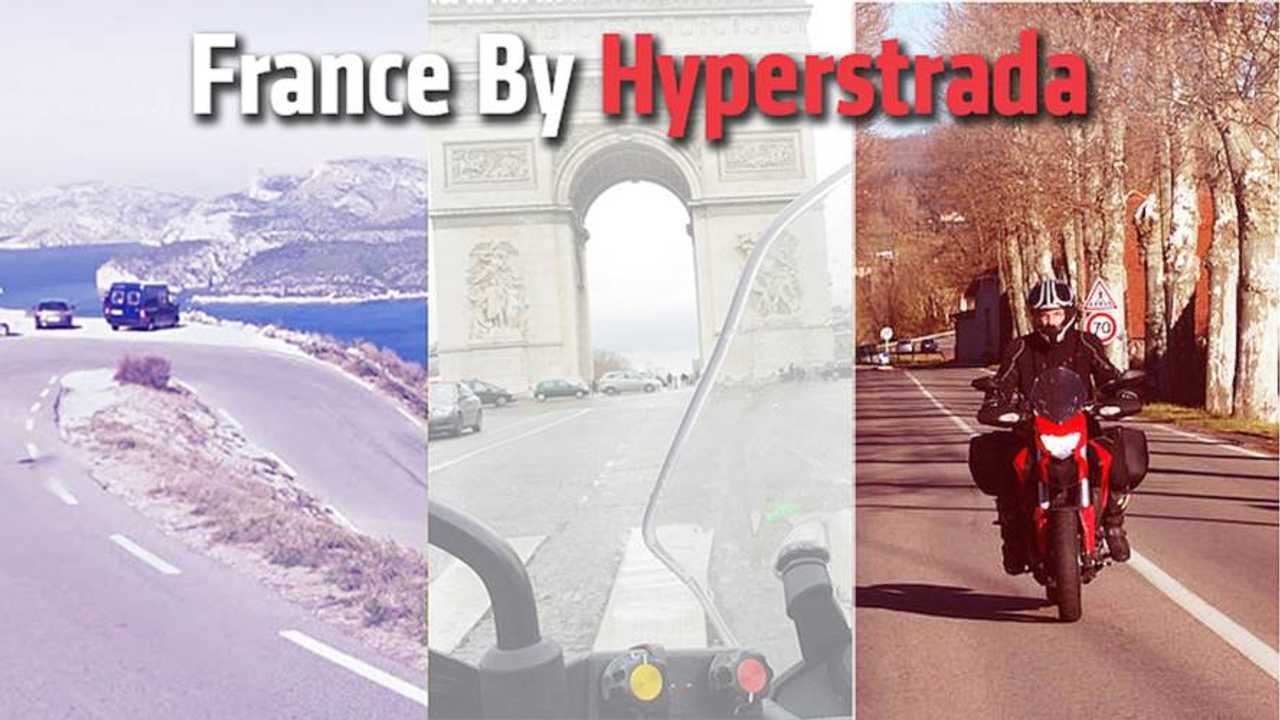 I've spent 2 weeks in France riding a Ducati Hyperstrada, and let me tell you, riding in France is way better than riding in the U.S. But it's worse, too.

I've just finished a two-week blast around France aboard a bright red Ducati Hyperstrada, and let me tell you, riding in France is way better than riding in the U.S. But it's worse, too. Here's what I found after 2000km on the big red twin.

The very first thing you notice while riding in France is the roundabouts. From the Arc de Triomphe to the little white circles painted in the center of so many rural intersections, they're everywhere. Traffic flows smoothly, and it's possible to string together a tank-long blast through the countryside without having to stop. It's as if there were a France-wide cheat code for red lights: lean right, lean left, lean right. The end result of the system is that you can choose a more interesting rural route without losing time sitting brainwashed and stationary in front of a traffic light.

After a few miles of painless intersections and gentle crests, I developed a rhythm over the smooth pavement, and thought to myself “I could get used to this.” The excitement quickly wears off when you realize that though there are relatively few traffic lights, Europe is full of another type of electronic waggy finger, the speed camera. More on those later.

The roads through the mountains are different than those in the U.S., and big black streaks decorate the exit of alpine hairpins. If you come upon a dawdling driver, it won't be a problem, since there aren't endless miles of double yellows in France. The vast majority of the country is an overtaking zone. A spread-out dashed white line means it's safe to overtake, while closer spacing means you should exercise more caution when overtaking. There are some no-passing zones, of course, but they are rare. People understand that if you're on a motorcycle, you're going to be able to get somewhere faster than they can.

Drivers seem to love being overtaken, too. Catch fast-moving traffic on the highway and cars will actually move to the edges of their lanes to let you past. I've had it happen to me between the two leftmost lanes at 70 mph. Another time, I found myself on a long, one-lane exit ramp that crossed a highway to get to a toll-booth. The grumbling semi-truck in front noticed me behind him and hugged the right side of the ramp so I could squeeze by the five-foot wide space between him and the barrier on the left. Lane splitting is commonplace, but when confronted with a lot of traffic, riders cross to the other side of the road and ride against traffic until they're at the front of the queue. It all works wonderfully well and keeps blood pressure low. A few years ago, the Transport Ministry tried to ban it, there was a giant protest, where all the motorcyclists rode on the highway and took up the space of one car each, bringing traffic to a standstill. The French are experts at protesting.

Nearly as good as the roads and overtaking is received, is the French attitude toward parking motorcycles. It's laissez-faire and makes parking both worry-free and convenient. Strings of motorcycles line the sidewalks. They sit outside cafes. They're everywhere. They only place you won't find them is on the grass. It used to be the same way with cars, but now there are bollards on every sidewalk and cars must do more work to find a place to park.

There are negatives, however—the cameras, the fuel costs, and the wacky rules. Speed cameras use radar, but in France, radar detectors are illegal, and getting caught with one — even if you aren't using it — carries steep penalties. Up to 1500 EUR and confiscation of your vehicle. The law was expanded in 2012 to cover GPS units that show where fixed cameras are, so now your options are to keep your eyes peeled or to put a GPS camera app on your phone. Connect the app to your in-helmet audio, and keep it a secret if you get pulled over. Fortunately, policemen here seem like a tolerant bunch, so the best bet seems to fight the unsympathetic speed cameras with an app and then maybe try your luck with les gendarmes.

Even without speeding tickets, the cost of riding a motorcycle in France can seem prohibitively expensive. Last week, I bought gas for 1.60 EUR per liter. At that price (assuming a 1.35USD/EUR exchange rate), a motorcycle that gets 42 miles per gallon will consume your gas money at a rate equal to a vehicle that gets 18.5 miles per gallon on gas that costs $3.40 a gallon. After a few fill-ups, you feel like you're stopping to pay tax, rather than stopping to buy gas. Road tolls are steep too. On the 775 km ride from Marseille to Paris, a motorcyclist can expect to pay 34EUR of road tolls, and buy 85 EUR of gas. Moving around is expensive enough that a carpool service called Covoiturage has exploded. So has OUIGO, a cut-rate TGV train service that hits nearly 200 mph and will shoot you from Marseille to Paris in three and a half hours for as little as 20 EUR.

Scooters, though, are everywhere. The high-energy costs and motorcycle-friendly parking attitudes are a big reason why so many people ride motorcycles, and why the scooter market is so huge here. People don't necessarily prefer riding to driving, but motorcycles are the only fiscally—and temporally—responsible way to get around town. A 3-wheeled scooter or Yamaha T-Max is de rigeur in big French cities, and tellingly, the people who ride scooters treat them like little cars. More often than not, they have topcases, skirts, heated grips, and big windshields. I even spotted one scooter in Paris that had a baby seat strapped on the back.

The “motorcycle as little car” concept is why BMW's innovative C1 is so popular in Paris, too.

Motorcycle taxis can make life even more convenient. From the train station in Paris, you can toss your stuff in the panniers on a cushy Honda Goldwing and have an expert rider whisk you anywhere in the city. They even give you a jacket and a skirt.

For some reason, everyone in Marseille blasts around on tiny monkeybikes. Of course, Europeans can buy cool machinery we don't get in the U.S., so you see lots of 125 cc two-stroke supermotos by Beta and Derbi, as well as the odd Africa Twin, and manic TDR240.

Finally, it's good to keep in mind that there are lots of strange rules for French motorcyclists. The worst one is that all motorcycles are limited to 100 bhp here. Yes, the Hyperstrada I rode was limited to 100 bhp in all its electronic modes. That's enough for wheelies, but it's frustrating to know that there are more ponies bottled up in there somewhere. Even a Panigale or Superduke R will make only 100 bhp if it's been purchased in France. The drunk-driving limit is 0.5 mg / ml, and by law you must have two disposable breathalyzers with you when riding (though there is no fine for not having them). There must be a small reflective area on your jacket for visibility, and you must have a complete set of spare bulbs for your motorcycle (LED lights excepted).

Aside from the fuel costs and speed cameras, it's heaven here. The roads are magic and the cars are friendly. The food is second-to-none. For more proof of what nice riding can be had in France (and a very good reason to learn French), check out this video by French magazine MotoJournal.

Have you experienced roads outside the U.S.? Of so, where and how was it?