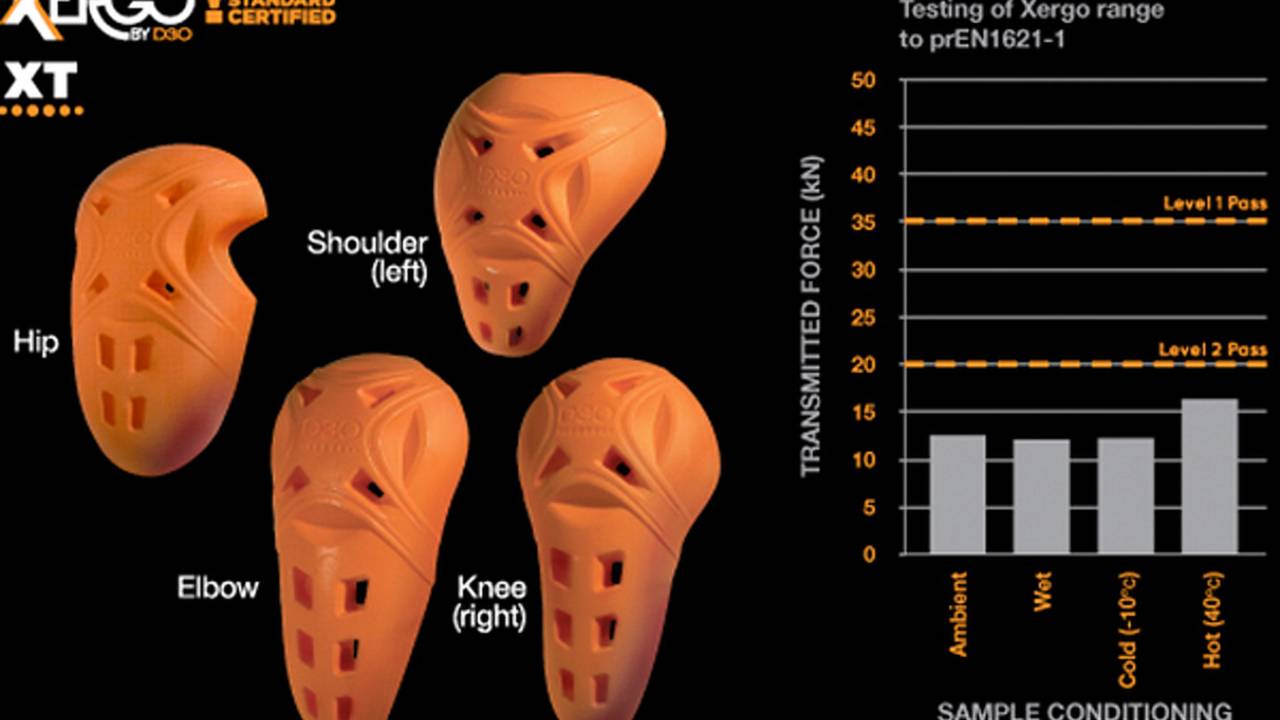 What you're looking at is D3O's new "Xergo" range of elbow, shoulder, hip and knee protectors. At just 20mm thick, they're capable of transmitting as little as 13kN of force to the wearer in standard CE testing. The minimum requirement to pass that test? 35kN, 2.7 times more. It even exceeds the absorption dictated by the new CE 2 standard for limb armor.

CE 2 for elbows, shoulders, hips, knees and shins? You're probably already familiar with the whole CE 1, CE 2 thing from back protectors. Two levels of energy absorption providing two options for riders: slim, light and fairly safe or thicker, heavier and very safe. Beginning in 2014, the same tiered system will come to limb protectors, along with revised test methodology.

In the CE tests, body armor's ability to absorb energy is measured by propelling an 11lbs weight with a 1.5 x 1.0-inch striking face into the armor with 37lb/ft (50J) of energy. The amount of energy transmitted through the armor is then measured and expressed in Kilonewtons.

The current CE standard has two blind spots: 1) some of the open cell foams used in cheaper armor can deteriorate in wet conditions or even experience "hydrolock" when soaked, eliminating the foam's ability to compress and therefor absorb energy. 2) While the mean of all strikes in testing can't exceed that 35kN figure, a single strike can transmit up to 50kN and still pass.

The new set of standards, dubbed "EN 1621-1" now includes testing ambient, wet, cold (-10 degrees Celsius) and hot (40 degrees C) conditions. CE 1 armor needs to transmit 35kN or less mean and still allows a one time spike of up to 50kN, but not in "Zone A," the center area of the protector. CE 2 armor drops those numbers to 25kN mean and 35kN single.

Sorta mumbo jumbo, right? In layman's terms, CE 1 (same energy transmission as current CE standards) is enough to prevent broken bones in most crashes at street speeds. CE 2 will absorb 71 percent more energy, making it substantially safer. Like with the two levels of back protectors, this then gives consumers the ability to choose between light, thin, flexible and fairly safe or safer, but also a little heavier and thicker.

This is not to say that some motorcycle armor doesn't currently absorb enough energy to meet or exceed CE 2. Alpinestars Bio Armor, for instance, already exceeds the CE standard by 100 percent and is only 15mm thick.

In the case of D3O armor, that thickness increases from 13 to 20mm from the stuff that meets CE 1 to CE 2 and these new Xergo protectors don't just meet the standard, they drop way below it.

D3O is made from an impact sensitive polymer mixed with a foam base. The armor itself actually doesn’t go hard when impacted, the force is simply spread across a wide area. So you’re still getting good energy absorption. The active ingredient is actually a liquid that does turn hard, but, in its production form, that liquid is set into a foam that remains pliable. Because it can spread impact forces across a large area, it can afford to be thinner, absorbing the same amount of energy in a slimmer package than traditional armor or more energy if it's the same size. These new Xergo protectors are as thick as traditional armor, meaning they're very safe.

The first product available in America to incorporate Xergo will be the new Klim Adventure Air Jacket. Fittingly, it's a heavy duty ADV jacket designed to flow tons of air in hot weather riding. Xergo isn't just thicker than the 1st gen D3O armor, but incorporates larger holes too, so it helps the Adventure jacket breathe.