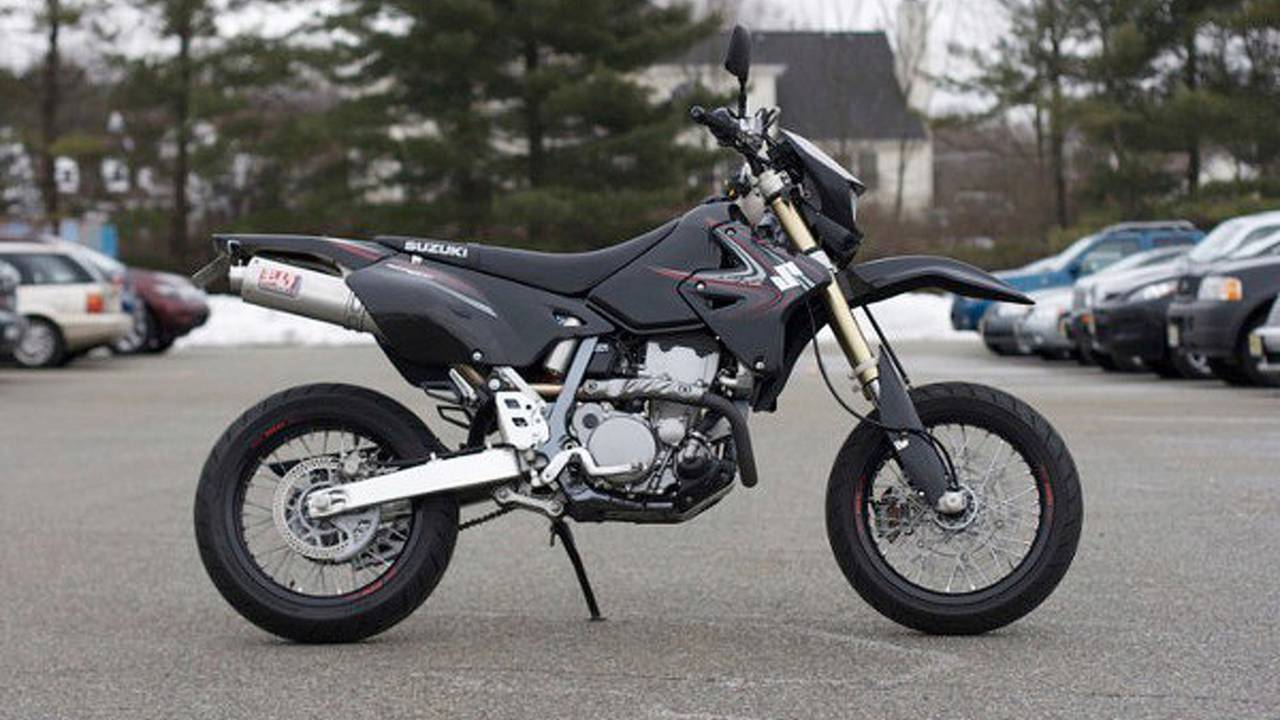 Real Rides: Chris' DR-Z400SMSupermotos are dirt bikes that have been converted for street legal use. The knobby tires have been replaced with street...

Supermotos are dirt bikes that have been converted for street legal use. The knobby tires have been replaced with street ones and mirrors and turn signals have been added to the bike for legality. This means you get all the versatility of a dirt bike on the street and all the fun that goes with it. They are incredible machines known for their robustness and go-anywhere ability. Here is reader Chris Fetherston's DR-Z400SM and why he rides it.

Chris wheelyng on his DR-Z.

Chris Fetherson is a 27 year old designer and web developer from New Jersey who's been "an avid motorcyclist for as long as he can remember." His father introduced him to motorcycles by teaching him how to ride a dirt bike when he was 6 years old. Chris has owned many bikes aside from the DR-Z400SM — an R6, a Ducati 748 track bike and he is in the process of restoring a Yamaha RD350. He is also participates in the supermoto community on the east coast and has been a Eastern Supermoto Racing Association (ESMRA) rider.

The DR-Z400SM through a corner.

The DR-Z400 is a 398cc, single-cylinder, 4-stroke dual-sport motorcycle that outputs 34 horsepower and 25 pounds of torque. It was introduced into the Suzuki line-up in 2001. The SM stands for supermoto and changes the motorcycle into a street legal dirt bike with mirrors and turn signals. The SM version of the DR-Z includes 17 inch wheels, oversized front and rear brakes, a RM-Z rear swing-arm and inverted forks.

The DR-Z from the rear.

Why He Rides A Supermoto

He changed his commute from car to bike because it shortened the time from a couple hours to 30 minutes and he could ride the DR-Z on backroads — which is great fun — with the added bonus of getting 45 miles to the gallon. He enjoys the DR-Z400SM because it's a motorcycle that can adapt into any situation. He states: "I've done so many things with the DR-Z you just can't do with any other motorcycle."

He chose the DR-Z as his bike because of these four things - First, sportbikes made bad street bikes because they are overpowered for the street. Secondly, it's so much more fun to ride a slower bike fast than a fast bike slow. Third, Chris was doing track days just before he bought his DR-Z and it was becoming too expensive and the chance of crashing at over 100mph was causing him to lose interest. Lastly, his experience with the DR-Zs have proven to him that it's a bulletproof design. And he has plenty of proof with 23 races and 7000 miles of commuting under his belt without any problems. Chris has done almost everything on his moto — supermoto racing, trail riding, light touring, adventure riding, commuting and "keeping up with your sport bike friends." Chris says you can do it all on the DR-Z400SM.