Moto Sapiens at the Bike Show 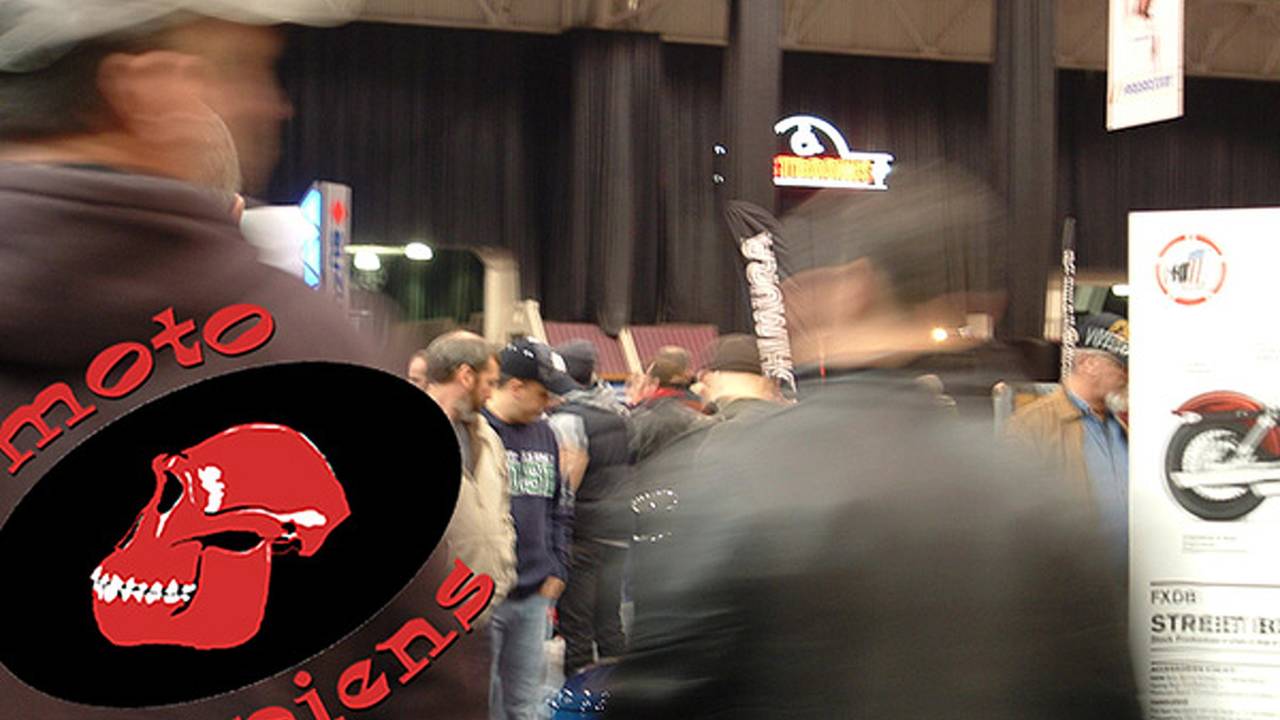 Carter Edman visits the Cleveland round of the International Motorcycle Show armed with a flask of whiskey and a rudimentary knowledge of David Bowie lyrics.

Seventy years ago in this building, they built tanks. Row after row of Sherman tanks, ready to ship to Europe for terrified young men to roll across the continent like a clankering green carpet, or to the South Pacific to be discharged from landing craft into a hail of brimstone. I imagine a young man who fought the war sealed inside a death-machine, coming home and hitting the highway, tempting death with a different machine. But this is a machine he sits on top of, not inside of. He is alive and doesn’t have to answer anybody’s questions about the war.

Decades later, when rust encrusted the city, the factory fell silent. In the Big 80’s, it re-opened as the “IX Center.” Today it hosts an annual series of exhibitions of various consumer products. Every year, it goes through the same cycle of meretricious displays of Stuff: home show, flower show, boat show, foodie-food show, dog show, car show. See George Carlin for a complete discussion of Stuff.

Most of us schmucks are never going to go to Italy for EICMA, so the Progressive International Motorcycle Show is your best chance to see all the different models side-by-side, and the first chance most of us have to see new models in person. Also, January offers precious few opportunities for Cleveland bikers to don our assless chaps and Sons of Anarchy t-shirts, so it’s really a must. We really need a fix right about now. For you Californianders, the Great Lakes region is just left of the Artic Circle. Even though Cleveland is on the balmy South shore of the lakes, it’s like the Riviera of Greenland in January.

The most important part of attending a consumer show happens before you leave for the IX Center: deciding what to put in your flask. Sure, they sell Bud Lite at the show, but that won’t get you through the back pain of standing on concrete for four hours. Obviously, for the Motorcycle Show, it has to be whiskey, but that just leads us to the same question we all ask ourselves every day about 5:00. Which whiskey? Bourbon, I think. Not too fancy, this isn’t a Basil Hayden’s event. But it’s not slumming either. Love ya, Ezra Brooks, but today’s not your day. It feels like a Maker’s day.

The main reason to go is just to be around bikes. That is reason enough. But the main thing you do there, the primary activity, is sitting on bikes. You go and sit on bikes.

There is a procedure for this. Stand 4-6 feet from the bike and observe knowingly. Notice details and point them out to your companions. “This bike has brakes, I see. Noice!” Move to the rear and look at the back of the bike. Nod. Move forward. Crouch down and look at the bike eye-to-eye, man-to-man. Try to look like you are making mental calculations about torque and displacement based on the outward appearance of the machine. Now you may sit on the bike.

As some of you know, I teach a class on motorcycle culture, and I required my students to go to the show. Sitting on a Monster immediately after sitting on a Star Stryker gives you a clear understanding of two completely different visions of what riding a motorcycle means. It’s something I cannot adequately describe in a classroom.

I find that, while sitting on the bike, it helps to make vroom-vroom noises and create vivid, detailed scenarios in your mind.

Here I am on a Road King, cruising on a dark desert highway, cool wind in my hair, warm smell of colitas – what the hell is colitas?

Now I’m on a YZF-R1, redlining past cars like they’re standing still. Shit. Was that a cop? No. Yes! Dammit!

Here I am on a Tiger 800xc going off-road on Mars. Hey, there’s the Curiosity rover! Wave to all the folks in Houston! This is awesome, but the truth is, Mars ain’t the kind of place to raise your kids, in fact the atmosphere is very thin and composed mostly of carbon dioxide.

I would sit on a Ural, but I am terrified of flipping it over in the woods, and I don’t have enough bourbon in my flask to deal with a compound arm fracture. I slink away in shame.

Of course, the other main activity is shopping at the myriad vendor stalls. You can try on a Belstaff jacket that the salesman already knows you’re not going to buy, or you can go around the corner and try on a “Ballstaph” jacket-like product made of genuine material. Stuff.

Then there’s the build-off competition bikes. I’ve written about Jesse Bassett’s stunning little red Indian before, and for me it is in a different league than all the other entries (sorry guys). Unfortunately, you can’t sit on the build-off bikes, but it’s probably for the best, given the Romanian-style gymnastic contortions most of them require from their riders.

But the real issue, the real important thing hit me when I stopped looking at the products and spent some time just watching my fellow Moto sapiens. It’s a great chance to see full-patch members of hardcore gangs like the Christian Motorcyclists Association, the American Legion, and HOG. Now, I expect to be surrounded by older men when I go to my secret Illuminati meetings where we fix the prices of world commodities...

I probably shouldn’t have mentioned that.

...but why is the crowd here overwhelmingly old dudes? There was the occasional young guy, family, or lesbian couple, but basically it’s the Ben-Gay-and-boner-pills crowd. As I was draining my last drops of Maker’s I realized something else. I had asked my students to write their first essay on their impressions of motorcyclists and motorcycle culture, and I realized there was a constant theme in their essays that I hadn’t noticed before: “old guys...,” “old men...,” “gray beards...,” “flatulent...,” “beer belly.” They are right!

Where are you, young men?! Please don’t let Frederick Seidel be right! Pay attention! Put that twitterphone down! God, you’re so pale! Is that...is that a knit hat that looks like a muppet?! Are you actually wearing your girlfriend’s jeans and your grandmother’s glasses? We have more work to do here than I thought. Where do we start? Boxing class, maybe, or wood splitting. Maybe just going for a hike. No, pilates does not count, son. Get out there and go!

We’re in a golden age of motorcycle design. The quality, variety, and accessiblity of bikes today is unprecedented. Hurry, boy, she’s waiting there for you! We’ve got to get more young riders to step off the porch. All the people at the show already own a bike; we have to get people there who are new prospects. We’ve come a long way from when that young GI chopped up a surplus WL and hit the highway.

Your job as Moto sapiens is to spread our sickness. Remember, you are a High Priest of the Thunder Lizard. Go evangelize. I’m not here to recommend whether you should go to the motorcycle show when it’s in your town, because of course you have to go. You will go, and you should go. The lesson that I’m spreading from my visit to the show is more than that; it’s a call to action. Know somebody who keeps asking you about your bike? This is their year to ride. Are you reading this stuff, but not riding? Take the leap. Ride proud, ride often, and spread the sickness.