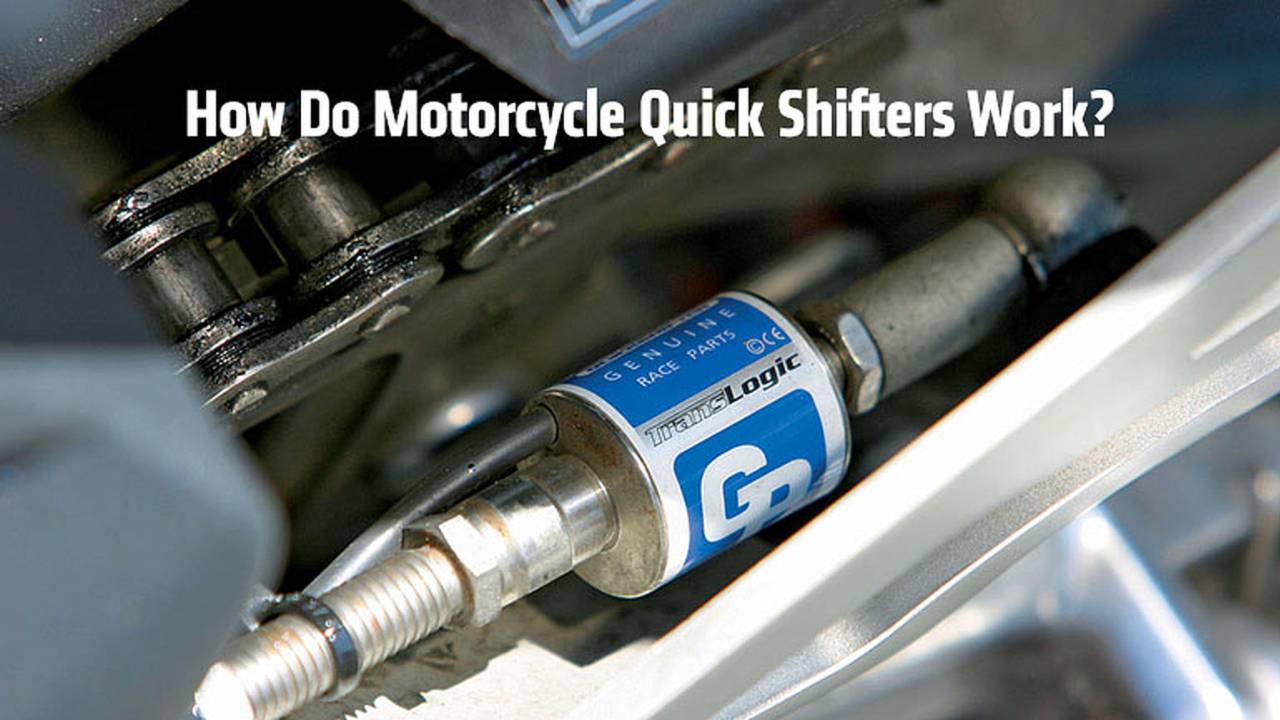 How do motorcycle quick shifters work? Let and engineer walk you through it.

Ever wonder how a quick shifter works? Here's a little primer.

Hold the throttle open, bump the shift lever up and you just keep going, seamlessly engaging another gear without disrupting acceleration. Magic. But, how to motorcycle quick shifters work?

The average motorcyclist focusing on perfect upshifts will usually complete the task in around 600 milliseconds. That’s 600 milliseconds to pull in the clutch, briefly roll off the throttle, move the gear shift lever, blip the throttle, and re-engage the clutch. Even skilled riders performing clutchless upshifts only drop that number to 300 milliseconds, and that still requires deft hands and impeccable throttle timing. If they’re sport riding and also concerned with body position, evaluating corners, executing proper lines and assessing road factors, that average time can go up. Our conscious thoughts have a lag time of 80 milliseconds, meaning there is a discrepancy in what happens and when our brains perceive it happening clocking in at slightly less than a hundredth of a second. So what if we wanted to have perfect upshifts performed entirely in 50 milliseconds or less? That’s where quick shifters come in.

Most of us grasp the concepts behind shifting gears, the use of the clutch and transmission, and the relation to engine speed and thus road speed. The clutch provides a way to incrementally and linearly engage/disengage the power from the engine’s crankshaft, acting as a sort of go-between for the engine and the transmission. When switching gears, we briefly cut power with the clutch and the throttle and smoothly reapply it in order to minimize a disruptive or harsh re-engagement of engine parts. So how can we take such a complex action and effectively squeeze down its operation time to double digit milliseconds and still retain seamless transitions? Surprisingly, in most cases all that is required is a sensor and access to a bikes’ ECU (Engine Control Unit).

Since quick shifters dispense with the rider having to fiddle about with the clutch and throttle, we have to inform the engine and ECU of gear changes just as they happen. The way this is achieved in most cases is by simply replacing the gear shift rod with another gear shift rod incorporating a mechanical sensor, which is then connected to the ECU. Under acceleration, as your foot moves the gear shift lever upwards, this mechanical sensor informs the ECU of an impending gear change. The ECU either cuts the ignition or cuts fueling to the engine ever so briefly (as little as 15 milliseconds), to take the extreme inertial forces off the drivetrain just long enough to neatly slot the next gear into place with minimal fuss. This ECU intervention mimics the throttling off and on of our gear changes, but six times faster than we can perceive it and perfectly every time.

As with most emerging tech, there are minor variances in how it can work. Some quick shifters rely on a type of positional sensor, which reads the physical state of the gear shift lever and informs the ECU in a change of position. Others use pressure sensors in the transmission itself, relying on the drivetrain pressure created by shifting without throttle adjustment to actuate the ECU response. Riders with older and/or mechanically carbureted bikes can enjoy quick shifters that use a direct link to the ignition coil. Roughly the exact same series of events happen, except instead of altering timing via the ECU, the ignition coil electrical supply is briefly interrupted.

Quickshifters, along with ABS and Traction Control, are fast becoming standard equipment on some of the sportier offerings from today’s manufacturers. BMW provides a quick shifter as standard on their S1000RR. Their new R1200RT has a neat little trick offered by the BMW Gear Shift Assistant Pro option, which allows for quick, precise, and smooth upshifts and downshifts. Aprilia also offers it as standard on their RSV4 and new Tuono, with their AQS (Aprilia Quick Shift) system including a secondary sensor in the gearbox that determines the currently engaged gear to further refine upshifts. MV Agusta and Ducati supply quick shifters as standard on some models, and Triumph offers a quick and easy bolt on option for the Daytona 675R.

If you’re interested in retrofitting your bike with a quickshifter, a number of third parties provide custom alternatives to fit your specific bike. Power Commander’s Dynojet Quick Shifter

can be made to fit your bike with a traditional shift rod position/pressure sensor, a “travel sensor” if your shift rod is incompatible, or a handlebar mounted switch to prime a quick gear change. The Bazzaz Quick Shift

allows you to change the engine “kill times” for each gear individually. The HM Quick Shifter

has accurate sensors and fewer moving parts, resulting in fewer failure rates. Many, many more options are available online and elsewhere for whatever you might need.

As amazing as quick shifters are, they don’t provide an advantage to poor or lazy riders. Riding with a quick shifter still requires riders to be intentional with their shifting. It’s not really great tech to be using in stop-and-go, in-town traffic or low speeds. They do provide a massive improvement in shifting times, and create consistent throttle throughout shifting. This prevents the traditional issue of upsetting a bike’s suspension with an imperfect shift, affecting stability through corners. Quick shifters will be great for eking out those few extra seconds on the track, and a novelty on public roads, but really they’re all about having loads of fun changing gears faster than our human perception can comprehend.

Do you have a quick shifter on your motorcycle? Are they worth getting just for the fun of it?