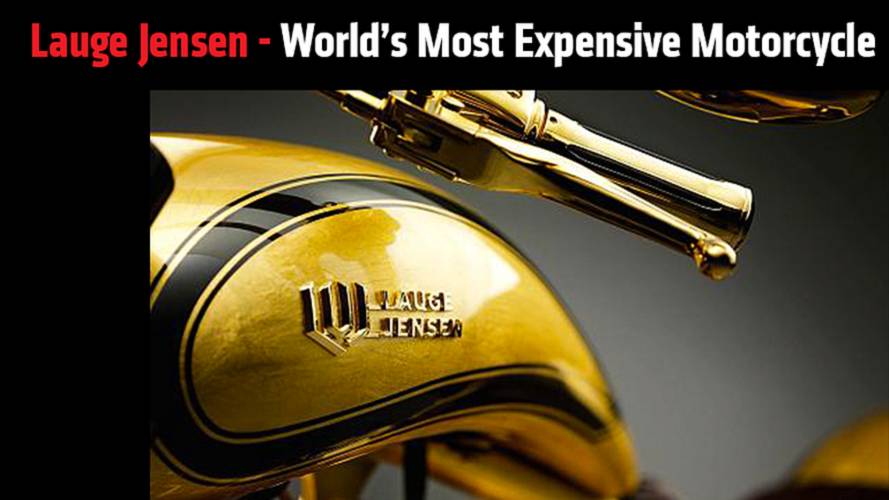 Lauge Jensen is now the World's Most Expensive Motorcycle. How expensive? Enough to make a Bugatti owner blush.

Not many things surprise us at RideApart, but when a customized, hand-built motorcycle sells for a staggering $850,000 it does make us raise an eyebrow and wonder what exactly wealthy people are doing with their money.

Danish design and engineering company Lauge Jensen, deals almost exclusively with high end clients building one-off custom bikes to order and it recently sold a what is thought to be the world’s most expensive motorcycle ever built.

There was nothing exceptional about the bike. It did not feature one of a kind technology, nor was it a unique engineering masterpiece, or even a motorcycle with some type of special history.

Instead, the bike, christened Goldfinger, was plated with 24-karat gold and covered from forks to tail fender with 250 small diamonds totaling more than seven carats. The seat was upholstered with crocodile skin and more than 850 of the bike’s parts were gold-plated individual by hand.

Normally, customers approach Lauge Jensen with an idea for a bike they want but on this occasion the company built Goldfinger without a customer order and then took it to private events earlier this year, staged in Monaco and Dubai, to show potential buyers.

Somebody at one of these gatherings saw the bike, liked what they saw and handed over $850,000. Nobody knows who the buyer is, or where the bike will be kept as Lauge Jensen declined to comment.

However, the company’s founder and chief creative officer Uffe Lauge Jensen said that there was a lot of interest in the bike despite the high price tag.

Jensen says he is now working on another motorcycle with a customer that could easily cost in excess of $1 million. He wouldn’t reveal specific details but added: “it’s going to have a lot of stones and diamonds. We’re talking pretty wild stuff.”

We think we’ll hang on to our money.