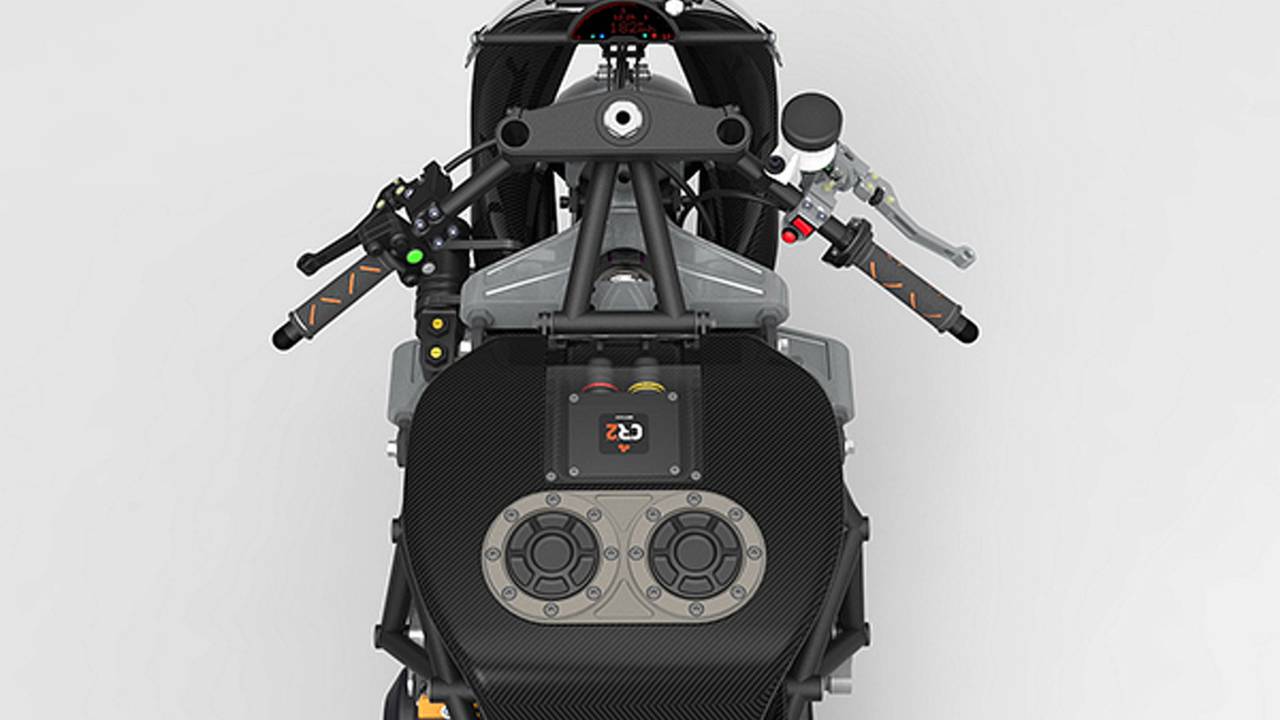 The Bottpower Morlaco is back on track11 years ago, I read about a funny-front-end CBR954RR in MCN. It had a bespoke trellis frame that seemed to...

11 years ago, I read about a funny-front-end CBR954RR in MCN. It had a bespoke trellis frame that seemed to flow uninterrupted into the girder forks. I found it particularly interesting because it used the motor from the bike I owned at the time. Then, Bottpower got busy building race bikes, transforming into a real company in the process and putting the Morlaco firmly on the back burner. Now, having developed a Moto2 racer and various customers customs, they're returning to it.

The original build is distinguished by its orange frame. The new renders color the frame black.

The goal "is to build a high performance street superbike (also for the track, of course), with a modern 1000cc engine and high level components," writes David Sanchez. "A bike that would allow us to take the maximun profit of the electronics we are developing (which are already competing in 2013 World Supersport championship with Gabor Talmacsi). As you probably know, in Bottpower we always have been very interested in alternative front ends, so this is a solution that we also would like to use in our future superbike."

"This was a free time project, the bike building was very advanced but at that time I started working on the races as a second job and all my free time went there, so the bike was never completely finished and tested."

"Later on Bottpower became a small company and we started working on new projects: the moto2, the racing electronics, the XR1, and some more that we will show very soon. Years passed by and the Morlaco did nothing but accumulate dust, disassembled in a corner of our workshop."

"But, some months ago we thought that if we want to build a modern superbike it would be interesting, as a first step, to finish and test the Morlaco. For sure that we can learn a lot of things from it before starting our new project. Moreover, it is important to finish what you start, and the Morlaco is a very interesting bike which deserves to be finished."

"The bodywork we designed years ago looks now a little bit out of fashion. We take aesthetics very seriously, so the first step has been to design new fibers for the bike (including the airbox and the fueltank)."

"Basically, what you can see in the renders is the original chassis and front end with the new fibers. We added a set of magnesium OZ rims with Brembo discs (the same combination we use in our Moto2). Brake master cylinder and clutch lever are ISR and the display is a Motogadget."

"We also have added our CR2 electronics module in a hollow at the top of the fueltank. We are very proud of our CR2 so we thought that it would be cool to locate it in a place in which it could be seen."

"We wanted it to look more as a racer. So we made it more spartan, with “less design”. We also wanted it to have almost no covers, so the airbox and the fueltank are seen. There is no bodywork, only the windscreen and the airbox intake conduits."

"I can’t talk about the Morlaco without mention Hugo van Waaijen (Dutch designer who lives and works in Germany). Since we started this project in 2002 till now, he has provided hundreds of inputs, ideas and sketches. He is a very talented and passionate designer, an essential part of this project, I am very fortunate having him involved because working with him is a really cool experience."

"For sure that we will still make changes to this design. The intention of publishing this renders is to have your feedback. What do you think about this redesign of the Morlaco? Do you like it this way or do you think it should look more like the original sketch?"