Bow Down and Worship the Royal Enfield Bullet 350 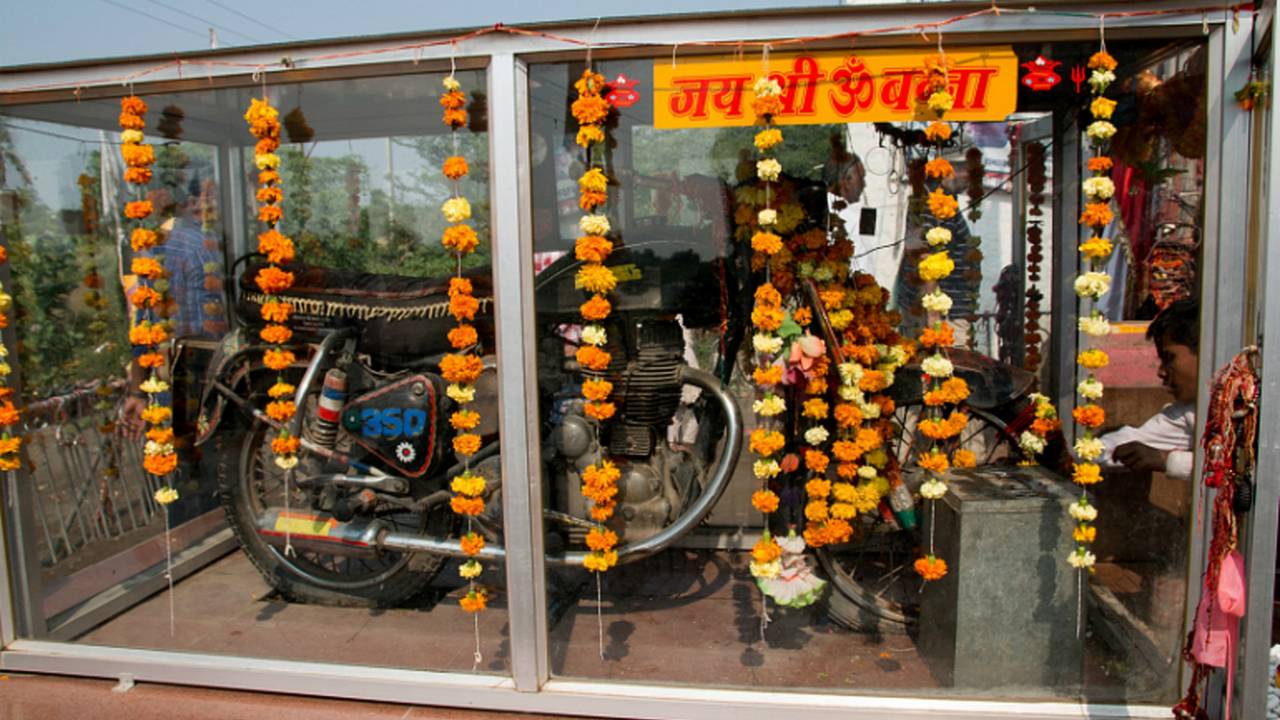 A Place Where "Motorcycle Worship" Takes On a Whole New Meaning. A Shrine to The Royal Enfield Bullet 350.

A Shrine to The Royal Enfield Bullet 350 - Motorcycle Worship Takes on a Whole New Meaning:

A Royal Enfield motorbike—especially the Bullet model—is revered in India. It’s more iconic here than it ever was in Britain. In almost every city in India you’ll find a Royal Enfield riders club, and in those clubs you’ll always find dozens of riders whose Bullets were passed down from generation to generation. These bikes are not just a mode of transportation—these bikes are part of the India’s cultural fabric...motorcycle-wise.

Every Royal Enfield rider will have (and, frankly, must have) at least one exciting anecdote regarding their pride and joy. There are also a large number of mechanics, spare parts shops and modification houses, large and small, who will both restore and transform your Bullet into the ride of your dreams. The love for the Bullet here is so intense in India that it’s practically religious. To give you an idea of how much the Bullet is worshiped here, the motorcycle even has it’s own shrine.

Located in the Pali district of Jodhpur in Rajasthan is a shrine that is devoted to a deity in the form of…well…a Royal Enfield Bullet 350. Take a drive on the Pali-Jodhpur highway and you will come across the shrine somewhere around a village named Chotila. The shrine is devoted to “Om Banna Baba,” popularly known as “Bullet Baba.”

Now, just like every other shrine, this one too has a back story.

Back in 1988, a young man by the name of Om Banna was on his way to Chotila atop his beloved Bullet 350. En route, he had a terrible accident where he lost control of his Bullet and was thrown off the motorbike into a tree. He was killed on the spot, while the Bullet slid across the road and landed in a ditch.

When cops took the damaged bike to the police station, things took a bizarre turn. The next morning, the cops found the bullet went missing from the station yard. Later that day, it was found back in the ditch at the accident site.

Though confused by this inexplicable development, they brought it back to station, drained out the gas tank and locked it with chains to outwit the prankster who must have been behind the vanishing act. However, that night the motorbike vanished from the station again, only to be found the next morning back at the accident location.

The ghostly burglary was repeated night after night, with the ill-fated Bullet reappearing at the site of the fatal motorcycle accident. The phenomenon piqued the attention of locals who, naturally, deemed it a miracle. Additionally, the young man’s spirit began appearing in his grandmother’s dreams, requesting for the construction of a shrine at the area where he died.

To cut an even longer story short, a shrine was erected to deify the Bullet 350 motorbike. Legend has it that if you are driving past the shrine, you must pullover and pay your respects to the deity or else the journey may not be a pleasant one. Now that’s a nice piece of fair warning.

Though the Bullet shrine may not have the magnificent architecture of a typical Indian temple, the Bullet Baba temple does have a priest. There are special prayers and ceremonies held to seek the blessings of Om Banna’s spirit, which the locals believe still resides in the Bullet motorbike. The tree that took Om Banna’s life can also be seen near the shrine, decorated with jewelry, garlands and red thread. The same goes for the motorbike—a string of shops selling everything from incense sticks to coconut have sprung up around the shrine.

Now, the best piece of trivia on Bullet Baba: The deity accepts offerings in the form of beer, naturally of the “Bullet” brand. If nothing else, that easily makes Bullet Baba the kind of deity bikers would love to hang out with.

Other photos courtesy of Wikimedia.