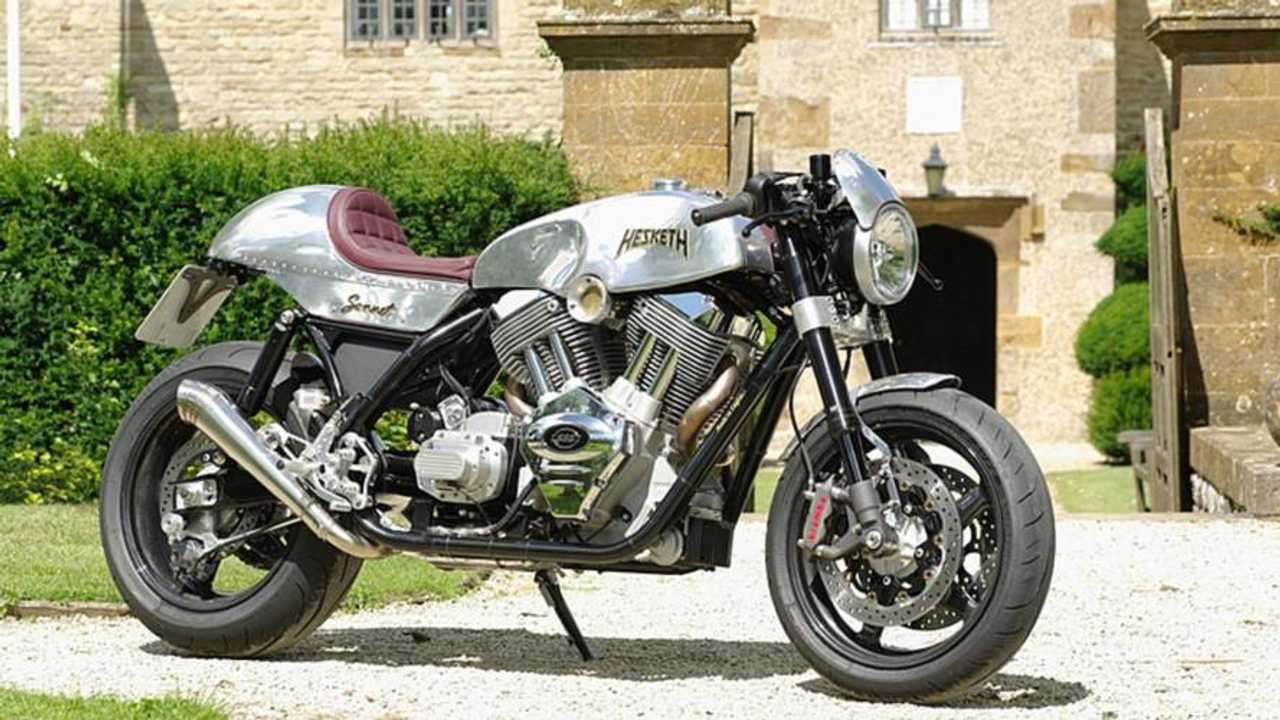 Remember Hesketh? No? Probably not. Hesketh was formed by England’s Lord Alexander Hesketh in 1980 to build high-end gentlemen’s roadsters and, ostensibly, to revive the moribund British motorcycle industry. It didn't pan out that way, though. The company's first bike – the 1000cc Weslake V-twin-powered V1000 – faced a number of design and engineering problems, most notably an overheating rear cylinder. Total production reached 139, and the company went bankrupt in 1982. Hesketh was then sold to Broom Engineering in 1984, but fared little better. Over the years both Triumph and Cagiva considered purchasing the marque but eventually declined.

Fast forward to 2006 when, after Hesketh sold the production facility, Broom Engineering planned a move to a building near the Silverstone racing circuit. Unfortunately for BE, just before the move all of the packing crates full of tools, bikes, and build records were stolen, a loss of some 40,000 pounds. Broom sold the marque four years later.

The brand was revived once again in 2013 and built the Hesketh 24 at a new facility in Surrey. The production was limited to 24 editions in the colors of former Hesketh Formula One racer James Hunt, whose number was – you guessed it – 24. Each model carried an 18-carat gold plaque with the serial number on the tank.

Enter the newest Hesketh to come along, the Sonnet. This new Hesketh is presented in cafe racer trim and powered by an air-cooled 2100cc S/S V-twin. The massive engine puts out 124 horsepower at 6000 rpm and 154 lb-ft of torque at 3000 rpm. That’s some grunt.

In addition to plenty of chrome, the engine features closed-loop electronic fuel injection and a stainless steel two-into-one-into-two exhaust system. Power goes through a Rivera Primo 6-speed transmission and 525 o-ring chain. The chrome-moly steel frame carries a K-Tech inverted fork and a Bullit Springless shock on an aluminum box-section swingarm, with twin Brembo monoblocs radials on the front and a single Brembo mono in back. The front and rear 17-inch wheels are Dymag carbon fiber hoops.

The Sonnet is scheduled to go on sale this summer with an eye-wateringly high price tag of around £26,000 ($33,595). Is it worth it? Probably, if you're into ultra-rare, hand built, bespoke luxury superbikes. Will it be enough – along with the upcoming Valiant and Valiant SC – to keep Hesketh afloat this time? Who knows, but we can't wait to see what happens!