Learning to Ride: A Beginner’s Story 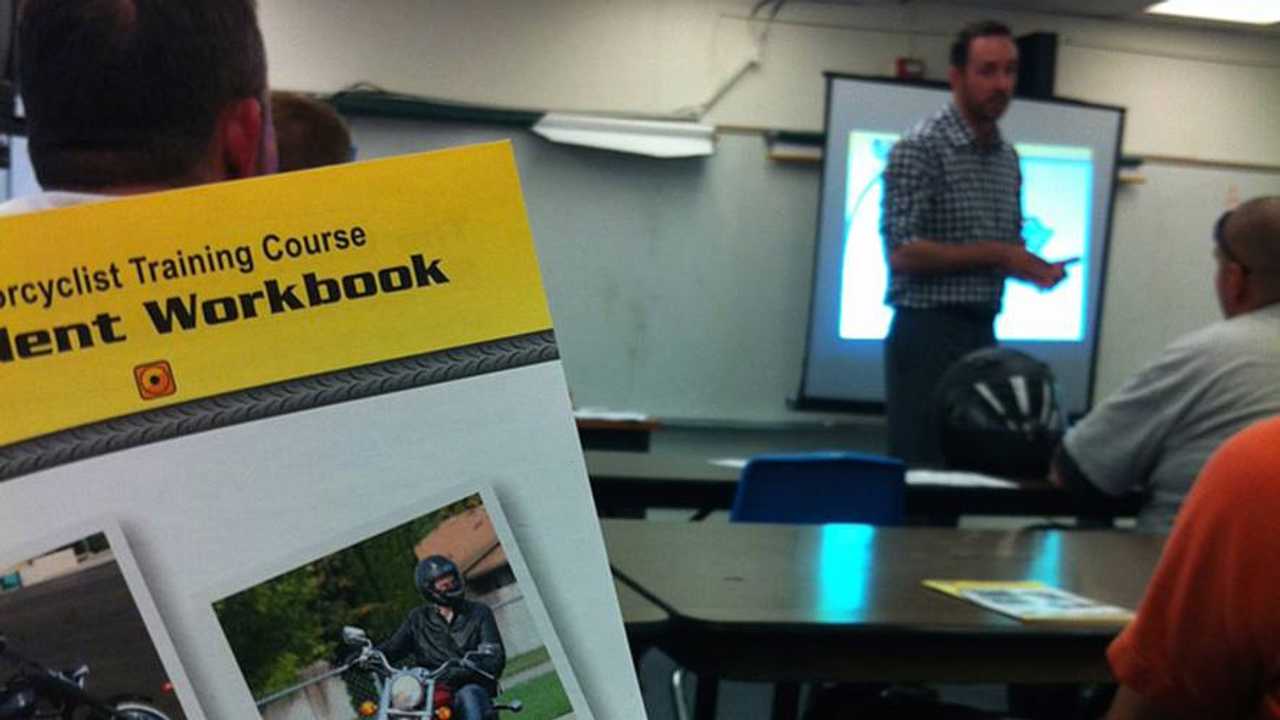 I tried, I learned, and I eventually passed. Here’s my story about learning to ride a motorcycle with exactly zero previous riding exp… CSMP training cla...

Learning to Ride: A Beginner's Story

It wasn’t easy, and it certainly didn’t come naturally, but I tried, I learned, and I eventually passed

Apparently summer is a busy season for motorcycle training programs. I signed up for my CSMP Training Course two weeks beforehand and reserved one of the few spots still available at Motorcycle Rider Education (MRE) all the way out in Simi Valley, CA. Our classroom instructor, Rick, greeted me with a handshake and a, “Howdy, grab a seat wherever you’d like.” He was welcoming, experienced, and ready to teach, which thankfully made me significantly less nervous.

CHECK OUT: Ask RideApart: The Beginner's Guide to Getting Licensed

Getting ready for the first session

People trickled into the classroom. Most were barely on time (they probably got lost in the adult school’s parking lot maze). I counted 21 people in the first session: four women (myself included) and 15 men, ages ranging from 16 to about 65. We went around the room and did intros. I’ll admit I was surprised – I expected the group to be made of mostly new riders like myself, but a majority of the students had ridden for years and just recently chose to formally ‘get legal.’ (I found out later from Rick that this crowd was pretty typical for MRE—two thirds of his participants are male, many are young and have moderate riding experience. Though, his stats might be affected by the relatively big riding culture in Simi Valley.)

After our intros, I thought of California’s CSMP pass rate: 85 percent. I certainly didn’t feel like I could be a better rider than 85 percent of the class after a three-day course—did that mean I was going to fail? MRE offers opportunities to repeat the class free of charge, but nobody wants that. I would hate to feel like a failure, and I didn’t have time for another three trips to Simi Valley. But I also didn’t have time to worry about it since Rick had already started the PowerPoint.

Checking out some helmets

MRE’s course is taught over the span of three days. The first session happens in a classroom; we covered risks, rider readiness, basic operations, and the physics of turning. They had a lot of great learning tips – acronyms and repeated phrases to help students remember what they need to do in order to ride safely. But, of course, no classroom exercise can prepare a person for the real thing.

The second day we got to ride the bikes. It’s intimidating to sit on a bike for the first time. One woman even left the class after turning the engine on (bringing our number of girls from four to three). She had ridden on the back of a bike for a while, but I guess she felt being in front of the handle bars wasn’t for her. I respect that conclusion, I really do; however, I wish she would’ve given it a second chance.

I had my fair share of feelings when I first sat down too: nervousness, intimidation, uncertainty – I probably forgot 90 percent of what I learned in class the day before and wouldn’t have known how to turn the motorcycle on if the instructor hadn’t repeated MRE’s "ONE-C" rule about 10 times. (ONE-C stands for ‘On, Neutral, Engine, Clutch,’ which works for starting just about any bike.)

Admittedly, it took me a while to catch on. Seems to me like there are two life skills that make learning to ride a piece of cake: knowing how to 1) ride a bicycle and 2) drive a stick shift.

CHECK OUT: A Beginners Guide To Motorcycle Gear

Unfortunately, I had only driven automatics before the course. Getting a feel for the "friction zone" (where the engine engages with the rest of the bike) was no small feat. I had no idea what a clutch was or how it functioned, and I certainly didn’t know how to use one. They tried to explain this in class, but I didn’t quite follow – don’t be like me: Ask questions when you don’t understand! If you haven’t driven a manual and you’re looking to start riding, it wouldn’t hurt to familiarize yourself with how a clutch works. You can find a handful of decent explanations on Google, or better yet, have a friend who rides show you how they start their bike.

The hardest working bikes around

Once I got the bike moving, maneuvering it came easily. I used to commute to work on a bicycle, and I think that gave me a leg up. I’m comfortable on two wheels and balance was never really a problem once I got above five mph.

The first day we stuck mostly to the simple stuff – turning (with our eyes and heads first), braking, and shifting gears. And by the end of the first day, I was having a lot of fun. The second riding session was a lot like the first, though it felt longer since it was held directly after a classroom session, and our riding drills required more mental energy. Overall, I caused more than my fair share of stalls, but the course wasn’t anything I couldn’t handle and the instructors prepared us really well for the final test. Call me bold (though, as a millennial, what else did you expect), but I dare say, riding a motorcycle is easier than it looks.

CHECK OUT: The Best Motorcycles For New Riders

However, I certainly don’t want to paint learning how to ride as a walk in the park. Three straight hours of riding is physically taxing, and mentally taxing too if you’ve never ridden before. One of the best ways to prepare is to make sure you’re rested and bring snacks and water. A good rule of thumb would be to pack the things you would send with your kid to summer camp. (One older couple brought a cooler of ice water and sandwiches the first day. They made friends real fast, if that’s any incentive.)

All in all, I had a great experience, and I’m incredibly happy that I can now say I know how to ride a motorcycle. Riding may not be for everyone, but I tend to think anyone can do it. It’s a matter of putting in the extra effort, if you don’t already have the foundational skills, and being willing to continue when you get discouraged. Trust me, it’s worth sticking it out for. To my fellow beginners: Good luck and stay safe!