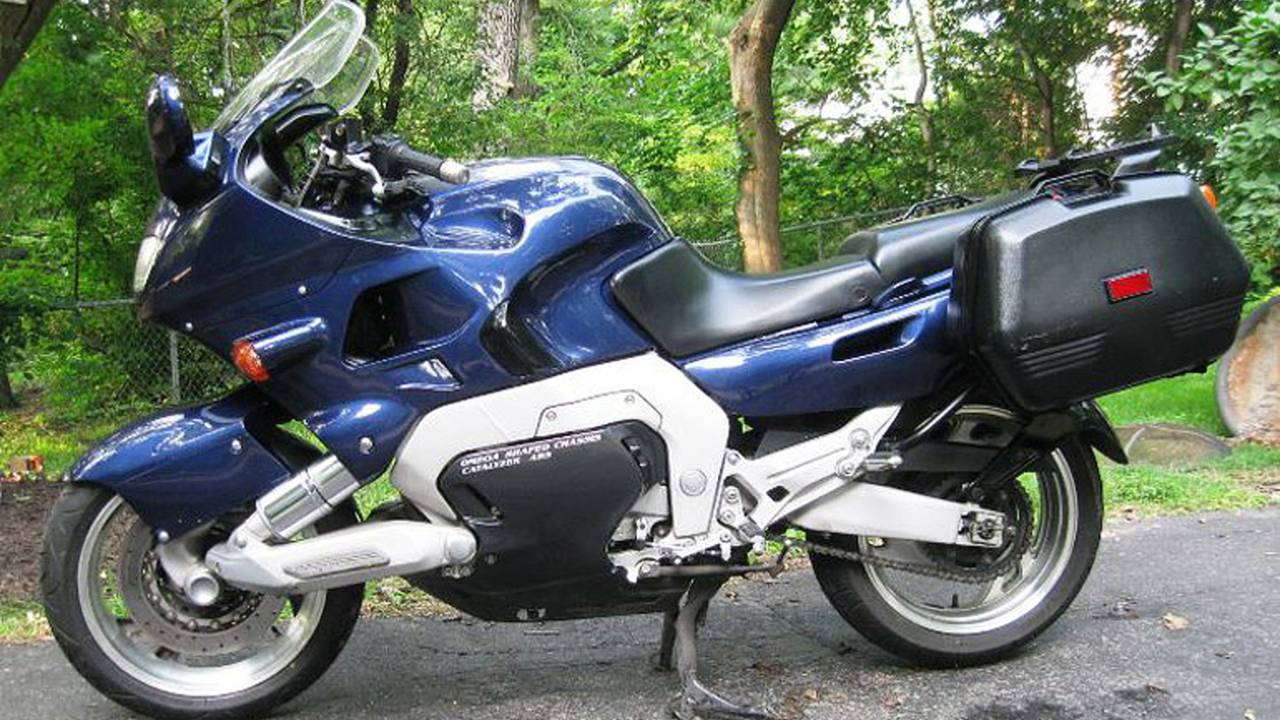 Online Find eBay Edition - Yamaha GT-S 1000 Future BikeYou never know what you will find on eBay, and here is another rare bike similar to the Rotary...

You never know what you will find on eBay, and here is another rare bike similar to the Rotary Suzuki RE5—a bike that is so revolutionary that no one bought it.

MUST READ:  A Hard Lesson: What Crashing Taught Me | RideApart

As odd as it may sound, the 20 year old Yamaha GT-S 1000 still could be the bike of the future; it seems like an alternate universe future bike that never happened. Just look at it—even 20 years later it's nothing less than the Robotech Cyclone, without the alien technology to transform into an armored exo-skeleton and jet pack.

This was one of the first bikes to have modern fuel injection and anti-lock brakes. Plus it also shared the advanced 5-valve Yamaha 1000cc motor from the same era FZR1000 to make a broad spread of torque and 100hp. And then Yamaha went big by licensing and building a single sided swingarm RADD front end design from James Parker. This meant now steering, braking and bump absorption could be handled individually, not all together by two telescopic fork legs. But let's let hip hop granny explain it.

MUST READ:  How to Buy a New Motorcycle, Tips from an Industry Insider Part 2: How to Find the Right | RideApart

Even a hip grandma shaking things up wasn't enough to get America to give up its forks though, and they stayed away in droves.

People who have owned and ridden these bikes love them. People who haven't ridden them are often amazed at their handling the first time they do, especially for a big sport touring bike with optional hard luggage. For Yamaha USA though, this bike was a bust after the first model year—with expensive leftover bikes cluttering up the sales floor for years afterwards. In Europe and Asia, it got a better reception and these bikes sold until 1999, with few changes.

This eBay example looks to be a clean, well maintained bike, though it does have 48,000 miles on it. The good news is the engine shares most parts with the FZR1000, which means if and when a rebuild is required, parts will be available. It even comes with nice upgrades like the Givi locking luggage system, braided lines, and touring handle bars. Now you just have to wrap your head around the single sided front end.

Here is what the seller has to say about the bike: "1994 Yamaha GTS1000. Sport Touring at its finest! This motorcycle was only sold in the USA for 2 years 1993 & 1994 and blue was only available in 1994. This motorcycle was far ahead of its time with a single-sided front swingarm and fuel injection. It was not a popular model as the list price in 1994 was $14,995!! I am the second owner of this motorcycle and purchased it in 1998 with approx. 8000 miles. I have all maintenance records from my ownership. The motorcycle currently has a little over 48,000 miles. I have the owner's manual and factory Yamaha service manual. I hate to sell this bike but I haven't ridden it the last 2 years as I am mostly riding trails with my 8 year old son now."

And here is what Yamaha had to say when they apparently hatched the bike out of a metallic egg that fell from outer space.