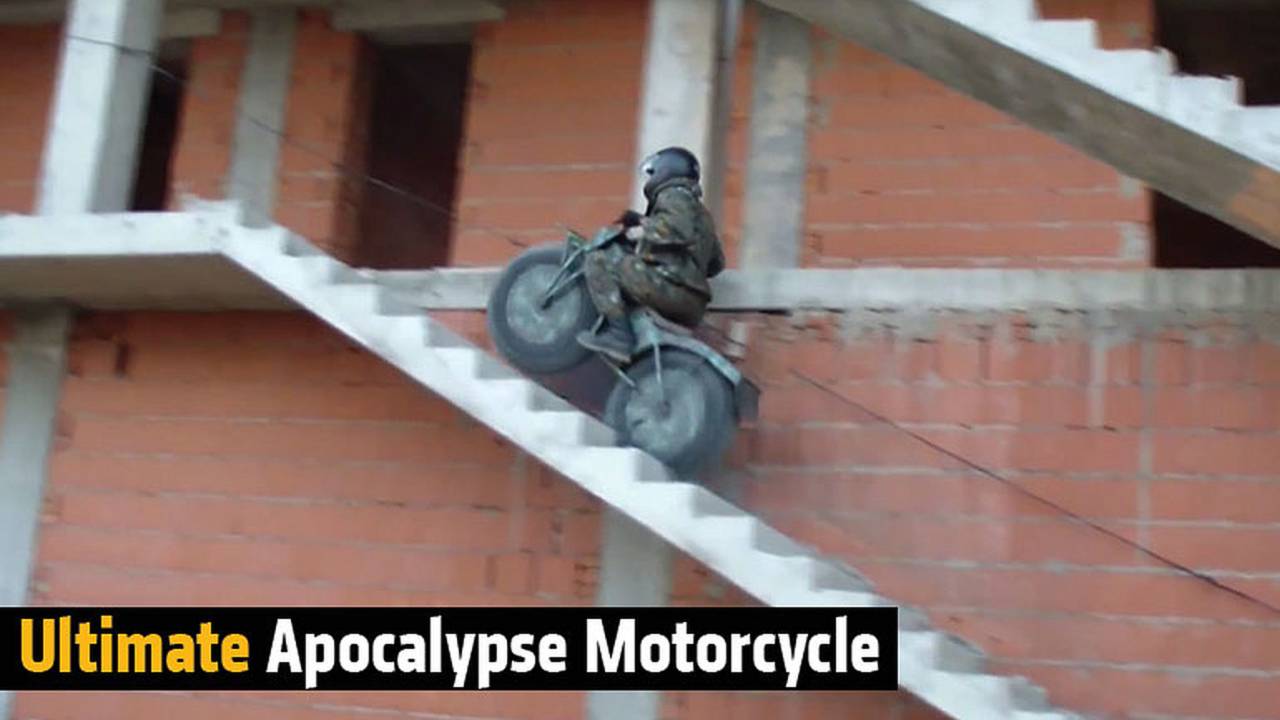 You can't beat this bike, but you can build it. A small, two-wheel-drive motorcycle that can be broken down into a duffle bag.

With the help of a Russian website, you can get the plans to build this DIY bike that floats in water and can drive over just about everything all for the low, low price of 1300 rubles or around $34, if you want to pay in dollars.

The Russians are calling it the Ultralight 2x2 Taurus 2, although we think "The Ultimate Apocalypse Motorcycle!" is way more appropriate. Powered by a minimoto engine and some running some seriously fat, balloon-like tires, the 2x2 is a go-anywhere, do-anything bike that can be disassembled into two duffle bags and taken with you on the go.  We think it's a perfect for the end of times and, of course, we want one.

If you're into old school, weirdo bikes then you might recognize this configuration because it's really similar to the Rokon Trailbreaker. Both bikes are more like two-wheeled ATVs and are designed to get people in and out of extremely remote locations where ordinary dirt bikes dare not tread.

Like the Trailbreaker, the Taurus 2 seems to be operated by a chain drive that turns the front wheel, which is attached to a type of a shaft drive mechanism that's embedded into the frame!!!

With a dry weight of about 100 lbs, this all-wheel-drive motorcycle can be disassembled in less than five minutes, packed up into two small duffle bags and easily thrown into the back of a car (see video below).

Like the Rokon, the Ultimate Apocalypse Motorcycle features high flotation tires that allow the bike to float—essentially allowing the rider to easily ‘walk’ this Russian-created masterpiece bike across deep water.

Now this bike might seem like it would be the perfect tool for a Do-It-Yourself fanatic in need of an all-terrain, custom bike, but we foresee some serious challenges in getting the damn bike to work.

For instance, the first step in creating the ultimate DIY motorcycle is learning to speak Russian, or finding a build partner who knows how to speak it fluently. The company’s website is in Russian and the owners aren’t planning to sell copies of the plans to non-natives (aka us puny Americans).

Once you learn the language though, all you’ll have to do is source all the bits and do all the cutting, bending, welding and bolting yourself, which, we fear, would probably take an ungodly amount of time. After all that, you'd end up with something like what you see on the official website, in the video below and, we think, featured in The Onion.

While there's no real suspension to speak of and the bike is way, way down on power, high-speed performance is never going to be the bike's strong point.  Rather, it's sheer weirdness that sells the bike. Well, weirdness and the added benefit of being able to drive across just about anywhere in Hell you'd ever want to go.