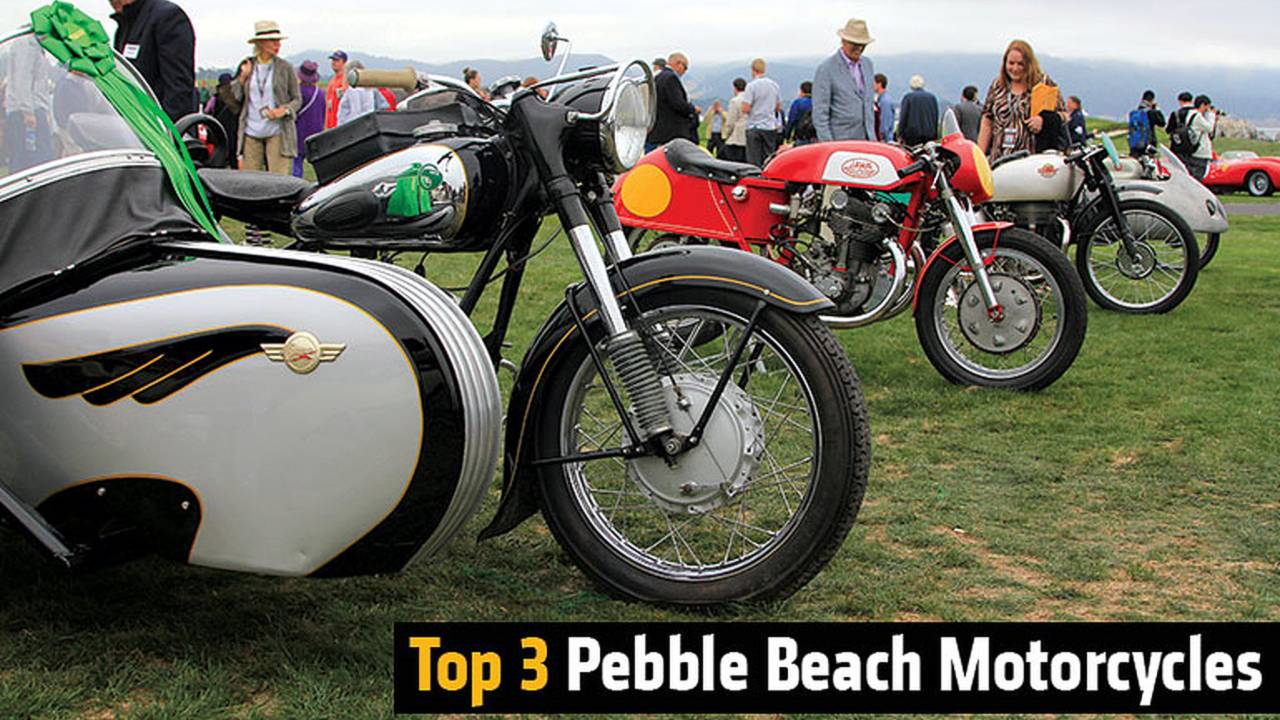 To many, any mention of the world famous Pebble Beach Concours d'Elegance elicits images of champagne and designer clothing. While automobiles dominate the week long classic car peninsula that is Monterey, CA, historically significant motorcycles have earned a firm place on the fairway.

This year, the X class is designated for motorcycles of a particular theme: motorcycles of Eastern European origin. We were amazed at the engineering, performance and styling accomplishments of these post-war bikes. Considering the political tensions that developed in the region shortly after WW2, reverse engineering of BMWs, Moto Guzzis and Harley-Davidsons can be found in each creation.

In 1927, Wanderer Motorcycles manufactured on the basis of Frantisek Janecek license, found themselves producing bikes under the brand name JAWA 500s. In 1930, an English designer, George William Patchett became associated with the company. His mission was to create faster, more powerful and more reliable chain driven motorcycles that were capably designed. As ambitious as he was, compared to its competitors the Jawa did not find favor in the commercially. However, their two-stroke Villiers proved successful, and in 1934 they completed a two-stroke with popular DKW style for the region. 1946 presented later spread 250 cc two-stroke model, dual exhaust. Soon after the 350 cc would help keep the doors open at the factory, being their most popular exported model. The Jawa was very successful and was extremely active in center stage racing events around the world. Jawa production is still going on, mostly refurbishing used Rotax engines. This Czechoslovakian dual overhead cam twin is from the JAWA factory team. Jawa was a very successful throughout the 1960s and achieved 4th place in the 1966 500 cc World Championship.

Zweirad-Union was an amalgamation of the DKW, Express and Victoria marques, based at the Victoria Works in Nuremburg. It was joined by Hercules in 1966, and soon after, the company was absorbed into the Fichel & Sachs group. Dr. Odilo Burkart, a confidant of Friedrich Flick, (scion of a wealthy German dynasty whose business interests included a minority share holding in Daimler Benz) purchased the Victoria Company, and with Victoria Director Heinz Tschech immediately set about reforming the firm into a productive operation. In 1960, Burkhart sold his interest in ZU to Hans Schmidt, owner of the heavy vehicle manufacturing company FAUN, recognized for its production of military vehicles for the German Army. Under Schmidt's guidance, several newly-designed motors and models were presented for sale. The most memorable of these machines was the legendary Type 115/155, better known as the “Tin Banana.” Numerous models could be purchased either with pedals or as a “Kleinkraftrad,” a low-powered machine with foot pegs and a kick starter. These satisfied German laws for young riders, where 16 year-olds were limited to a maximum of 50cc displacement.

When motorcycle production recommenced at DKW’s Zschopau works in 1946, the now East German state-owned factory badged its DKW RT125-based machines as ‘IFA’. IFA’s first all-new, post-war design, the BK 350, arrived in 1952 and would be badged as an ‘MZ’ when Motorradwerk Zschopau (Zschopau Motorcycle Works) adopted that name a few years later. The BK initials stand for ‘Boxer Kardan’ which refer to its flat twin, shaft drive powerplant. It was a piston-ported two-stroke that produced 15 hp and was capable of a top speed of 71 mph. A duplex cradle frame, telescopic front fork, plunger rear suspension and generously sized brakes made up the heavily featured cycle parts. Although the company produced an English-language brochure for the BK 350, it seems unlikely that more than a handful of machines were sold in the UK. Production of this option heavy and peculiar motorcycle ceased in 1959.