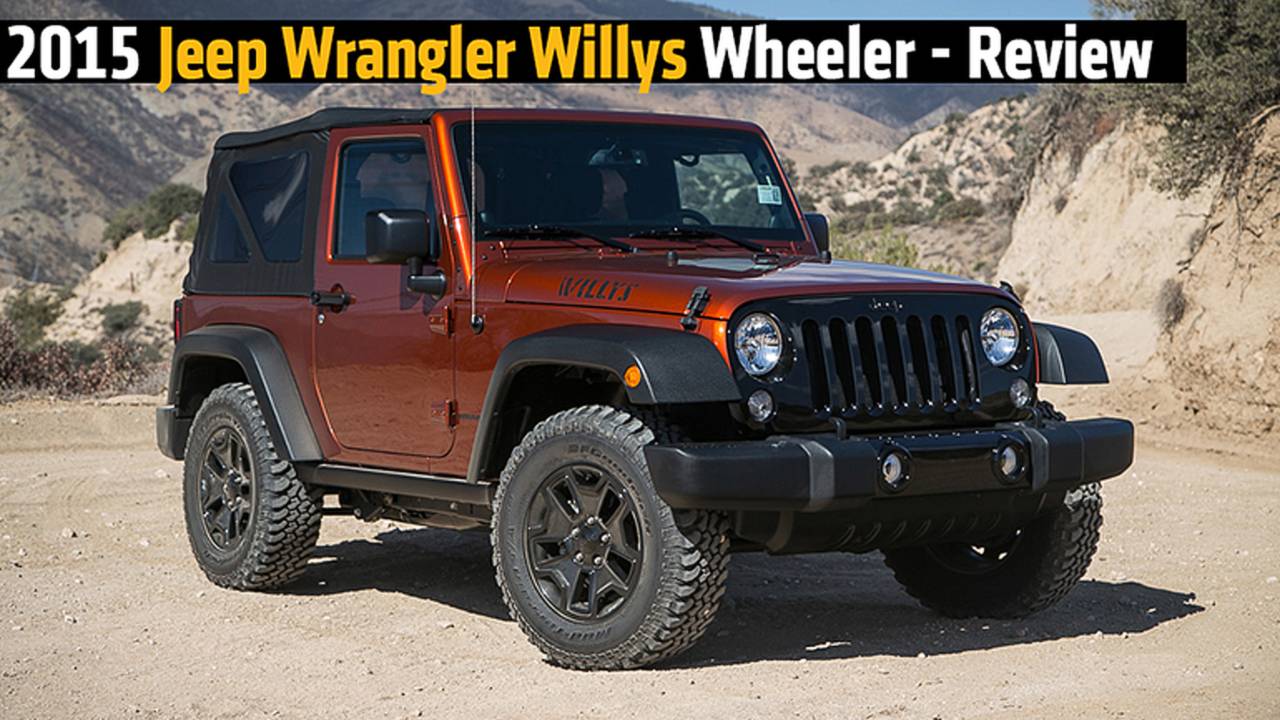 We go off-roading in the 2015 Jeep Wrangler Willys Wheeler.

While it's two wheels good, four wheels bad at RideApart, we thought the experience of off-roading in the new 2015 Jeep Wrangler Willys Wheeler was so awesome, that we wanted to present it to the whole site and not just the DriveApart fans.

It's a challenge to write about something as iconic as the Wrangler as the Jeep is seemingly unchanged since the WW2 debut of the original Willys MB and, it seems, just about everyone knows what this 4x4 is, and what it stands for.

It’s like we were born instinctually knowing what the Jeep is about – as if it was a part of our DNA – so that we come out of the womb knowing fire is hot, ice is cold, and Jeeps go off-road. One can’t judge the Jeep through a prism of “right” or “wrong” – it’s a vehicle that just is.

It’s a bit sad that, after 36 years on this planet – with 10 of those in the car-writing game – I had yet to experience one in person.  A quick call helped remedy that situation, and before I knew it, I had a Copperhead Pearl Jeep Wrangler Willys Wheeler sitting in my driveway.

And this ain’t no Cher-spec sticker package: this is a Jeep that screams “capability” from every angle. Its bumpers are appropriately imposing, seemingly forged from battleship armor and finished in a mix of glossy and flat blacks. Fog lights are recessed in the front bumper, directly below the piano-black grille, and all fenders come in a contrasting, scuff-resistant matte black. Heavy-duty rock rails come bolted to the frame, further enhancing this Jeep’s rough-and-tumble attitude. Additional touches include the “4 Wheel Drive” sticker on the rear gate – a callback to the original CJ-3A – and a Willys decal in Army-stencil font on either side of the latched-down hood. All in all, it’s cool stuff.

But what really got my blood pumping were the gloss-black 17-in. Rubicon wheels, or rather, the fact that they were wrapped in extra-knobby BFGoodrich Mud Terrain T/A tires. It would be a waste to keep this Jeep confined to suburban streets, so I drove this bad boy up to Gorman, California’s, Hungry Valley off-road vehicle park.

It should go without saying: the Jeep absolutely shines when out on the trail. This Wrangler Willys Wheeler rides a bit taller than the standard Jeep, and that extra ride height makes the Jeep a bit challenging to get into – you literally have to jump inside. But when charging down Gorman’s rutted dirt paths, that height becomes a godsend. Boulders in the middle of the path? They don’t matter. This thing rides so high that you can just drive over them and not worry about making contact. In my hours exploring Hungry Valley’s various trails, I didn’t scrape the undercarriage once.

The 3.6-liter, 285-hp Pentastar V6 is perfectly mated to this Jeep. Power delivery is smooth, with plenty of grunt down low, so it was easy to power up hills without the need to resort to the “4Low” setting. My specific tester was equipped with the 6-speed manual – its long throws are effortless, and reminiscent of those of my old 1986 4Runner, so it was easy for me to feel right at home. But the modern off-road enthusiast, likely used to full-auto systems taking care of everything, may find that it takes some time to get reacquainted with full manual control.

This Wrangler Willys Wheeler is also equipped with standard Downhill Assist Control, but to access it you have to dig incredibly deep into the steering wheel-controlled menu, making it almost useless. An easy-to-find button – commonly seen in other 4x4s – would be ideal. But for my needs – which were limited to terrains covered in rocks or loose silt – the Wrangler’s combination of greater approach/departure angles, Command-Trac 4x4 system and BFG tires were more than capable.

I’m the farthest thing from an off-road pro, but when driving this Jeep up a steep, silted trail, I feel unstoppable. With all four wheels pushed out to the corners, the approach angle is other-worldy. As one who drives a slammed import in my daily life, just the ability to go over debris – let alone small boulders – with with zero fuss seems almost unreal. And the ride control is admirably solid. It’s bumpy – I am driving over rocks and dirt, after all – but very manageable.

Departure angles are incredible as well, and now please try not to rage as I totally botch that term with this next example. During my journey off road, I had to back my way into several steep, small hills to three-point turn my way out of a few tight spots. But again, as this Jeep was set up to simply drive over the obstacle – backwards – I never really had to worry much about getting myself stuck, or breaking something.

The small-ish overall dimensions and short wheelbase only add to the maneuverability. Having been able to recently sample another, much larger 4x4 on these same trails, the Jeep seemingly has a sports bike-level of agility in comparison. Point the Jeep where you want it to go, and it simply goes there. It charges down the narrower pathways and takes those tight turns with aplomb. Shift the meaning of the phrase a bit, and it could safely be said that the Jeep Wrangler is a true American sports car.

But what really struck a chord with me was the sense of community amongst Jeep owners. One Jeep driver stopped and helped me find my way while I was lost – and every other Jeep driver flashed their lights and offered a friendly wave. I really felt like I was part of a club – sort of like being a Harley-Davidson owner, I guess, only surrounded by fewer dentists.

On the 60-mile commute back to Los Angeles, I got better acquainted with the Jeep’s on-road prowess. It’s a quiet, comfortable ride, though some of the gauges and interior plastics harken back to the days of the “cheap” old Chrysler. The zippered ragtop did an admirable job keeping interior noise to a minimum, and the sounds coming from the UConnect entertainment system were both pleasing and clear. Yeah, it kind of feels like driving a brick at freeway speeds, but it’s a Wrangler – what else would you expect?

And as shallow as this next bit will sound, women love the Jeep. Pulling up to the office in this Willys Wheeler, I got so much attention from my lady coworkers, I felt like the belle of the ball. Wait a minute… that analogy didn’t quite work… At any rate, no car I’ve driven has elicited this much excitement – not even the bright yellow Bentley Continental convertible I once had for a week.

As I read this article back to myself, I find I sound like an unapologetic shill for Jeep, and it’s kind of embarrassing. It’s just that, after 10 years in this game, it’s refreshing to step into a vehicle that not only knows what it is, but ready to flawlessly execute its mission. And it’s the Jeep Wrangler’s mission to have fun. It’s a “pure” machine, designed to conquer the off-road and put a smile on the driver’s face, and it certainly did that for this jaded auto writer. I only wish more cars were this fun.