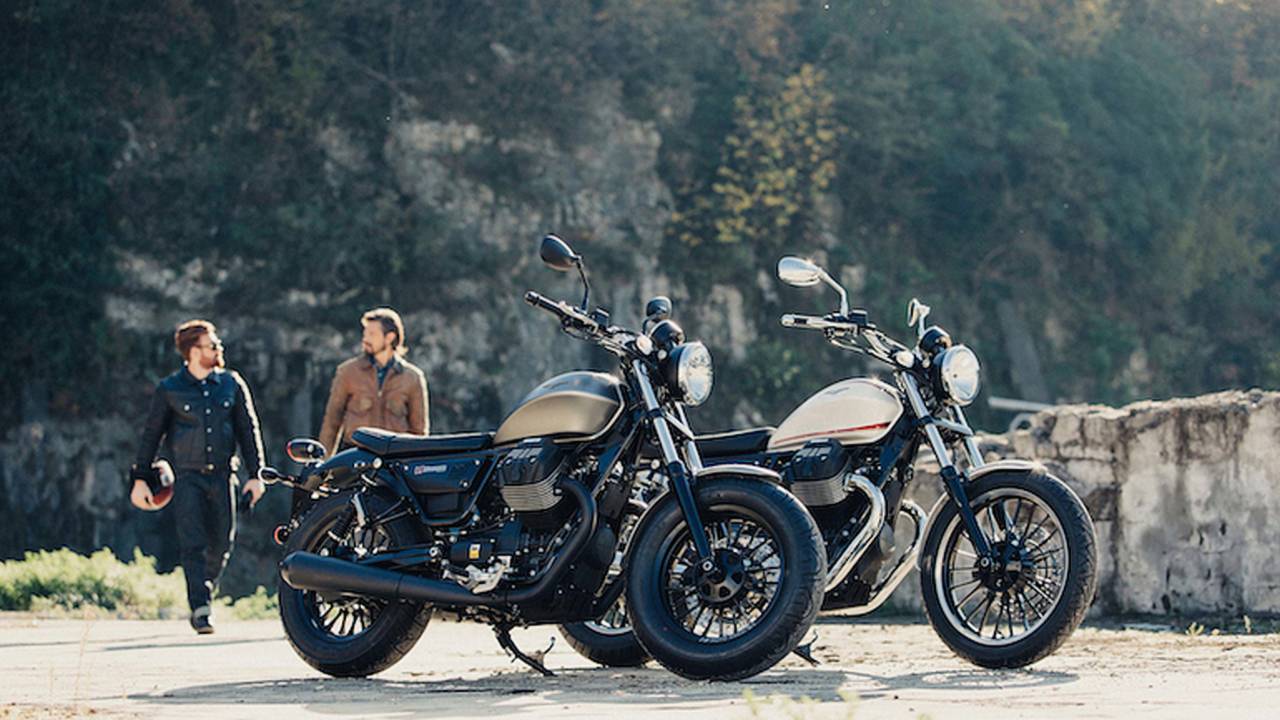 Some of the more underreported stories from this year's EICMA were those related to the new and intriguing models coming from Moto Guzzi.

Perhaps it had something to do with the fact that Moto Guzzi's media event was conducted in Italian, lasted several hours, and seemed to consist entirely of two guys sitting in chairs on a stage and speaking to each other respectfully.

But spinning on podiums some 40 feet away were the new V9 Bobber and V9 Roamer. Effectively the same bike but for aesthetics, I think the Moto Guzzi V9 is a machine capable of making a splash within the saturated genre of retro and retro-inspired machines.

The V7—from which the V9 is derived—holds a strong claim to authenticity within the hipster-luring world. In one form or another, the bike has been a stalwart for Moto Guzzi for 45 years. Last year, it was upgraded to become the V7II, offered under the "Stone," "Racer," and "Special" guises.

That upgrade saw the bike equipped with anti-lock brakes and traction control, but to many riders' chagrin, there was no boost in power. With just 47 hp, the V7II is at the bottom of the heap when compared against the Triumph Bonneville and Ducati Scrambler (but oh so slightly above the 44hp Harley-Davidson Iron 883).

The V7II remains a part of Moto Guzzi's lineup, but the V9 has been added to the mix in an apparent effort to appeal to those seeking a little more horsepower. Emphasis on the phrase "a little more"—the V9's 850cc transverse V-twin churns out a claimed 55 hp at 6,250rpm. That's still below the figures for Ducati's full-size Scrambler, but puts the Moto Guzzi more or less on par with the current Bonneville. Unfortunately for Moto Guzzi, the V9 will probably end up being beat by the new Bonneville Street Twin.

More About the Look

But, of course, you don't really buy a bike of this sort for speed. Moto Guzzi takes great pride in the aesthetic value of the new V9 models, and having seen them in person, I will admit their fit and finish are deeply alluring.

Sporting a six-speed gearbox, one of the Guzzi's greatest selling points may be the shaft drive system that ensures riders won't run the risk of getting chain grease on their expensive leather jackets. And although the V9's overall horsepower may not be astounding—peak torque (45.7 lb-ft) is found at just 3,000rpm—launching from stop lights should be a hoot.

ABS-equipped Brembo brakes provide the V9's "whoa" and Moto Guzzi upgraded the suspension from the V7II models. Other modern amenities on this retro bike include two-level traction control, an anti-theft immobilizer, and a USB port for the charging of phones, etc.

The V9 will also feature the option of something called "Moto Guzzi Media Platform," which allows a rider to connect the bike with a smartphone, allowing him or her to access a wealth of additional information.

The V9 Bobber, which looks distinctly un-bobber-like to my eyes, expresses a "darker and more nocturnal soul," according to Moto Guzzi. Riding on thick 16-inch tires, it brags a seat height of 30.3 inches.

The V9 Roamer will be offered in more cheerful colors and with more shiny bits. Inspired by the old Nevada 750, the bike features a 19-inch front wheel. A press release on the Roamer declares in bold that it is a "bike dedicated to the citizens of the world."

Not surprisingly, Moto Guzzi will also offer a range of accessories to allow riders to personalize their bikes a little more (think brushed aluminum and leather). Prices have yet to be announced.