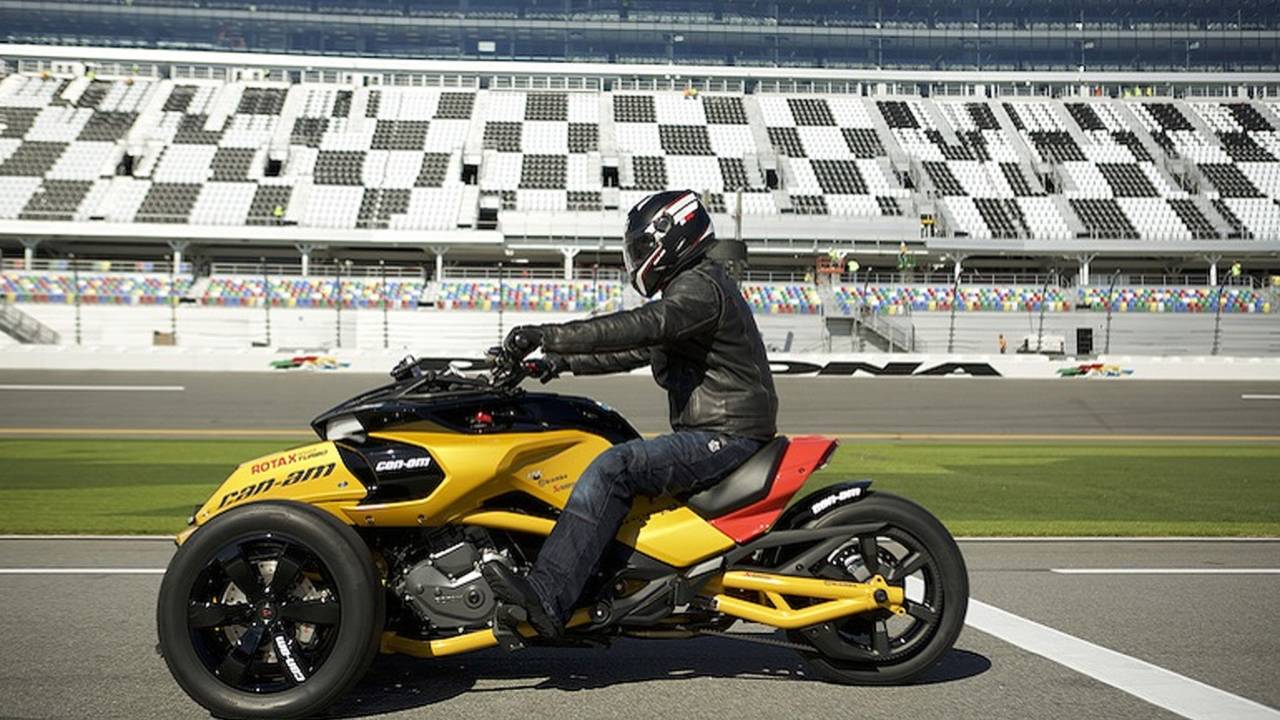 For the NASCAR and Trike enthusiasts: A Turbocharged Spyder concept.

Can-Am has pulled the cover off a turbocharged concept vehicle inspired by racing at Daytona. No, not motorcycle racing –– NASCAR.

Can-Am and its parent company BRP are an official sponsor of NASCAR this year. The pair are celebrating that partnership with a concept Spyder called the "Duel At Daytona." (We feel Can-Am has missed a trick by not calling it the "Dual At Daytona" because, you know, the Spyder has two wheels up front.)

"This sponsorship is a great opportunity for us to share our line-up of Can-Am on- and off-road models with NASCAR fans, whose values of excellence echo ours," said BRP's senior vice-president of marketing Anne Bélec.

Powered by a Rotax 1330 cc turbocharged and intercooled engine, the turbocharged Spyder F3 delivers 150 hp and—far more intriguingly—137 ft.-lb. of torque. According to Can-Am, it will do the quarter-mile in 12.3 seconds and accelerate from 0 to 60 in 4.3 seconds. It also features a sport mode that allows for controlled rear tire drifts.

Clearly the Spyder is seeking to shed some of its old-man image.

“BRP’s Rotax engineers challenged themselves to develop a turbo version of the Can-Am Spyder F3 engine, which resulted in this high-performance vehicle. Our team then fine-tuned everything to unleash its potential,” said Rénald Plante, director of Can-Am Spyder engineering. “This concept showcases the advantages of a Y-frame design, such as a lower center of gravity, the ability to drift, and superb tire grip during aggressive cornering.”

BRP will display its full line of Can-Am products, including the turbocharged Can-Am Spyder concept, at track Midway areas throughout this year's season, including at Daytona International Speedway.

Once the target of derision among many motorcyclists, various Can-Am Spyder models have proven to be immensely popular in North America. In 2015, BRP achieved a sales milestone of 100,000 units sold since the Spyder's debut in 2008.

This "Duel At Daytona" Spyder won't be available to the public, but it seems likely that its features, such as the tire-spinning sport mode, will soon make their way to production machines.