Harley-Davidson is Winning at Motorcycle Marketing 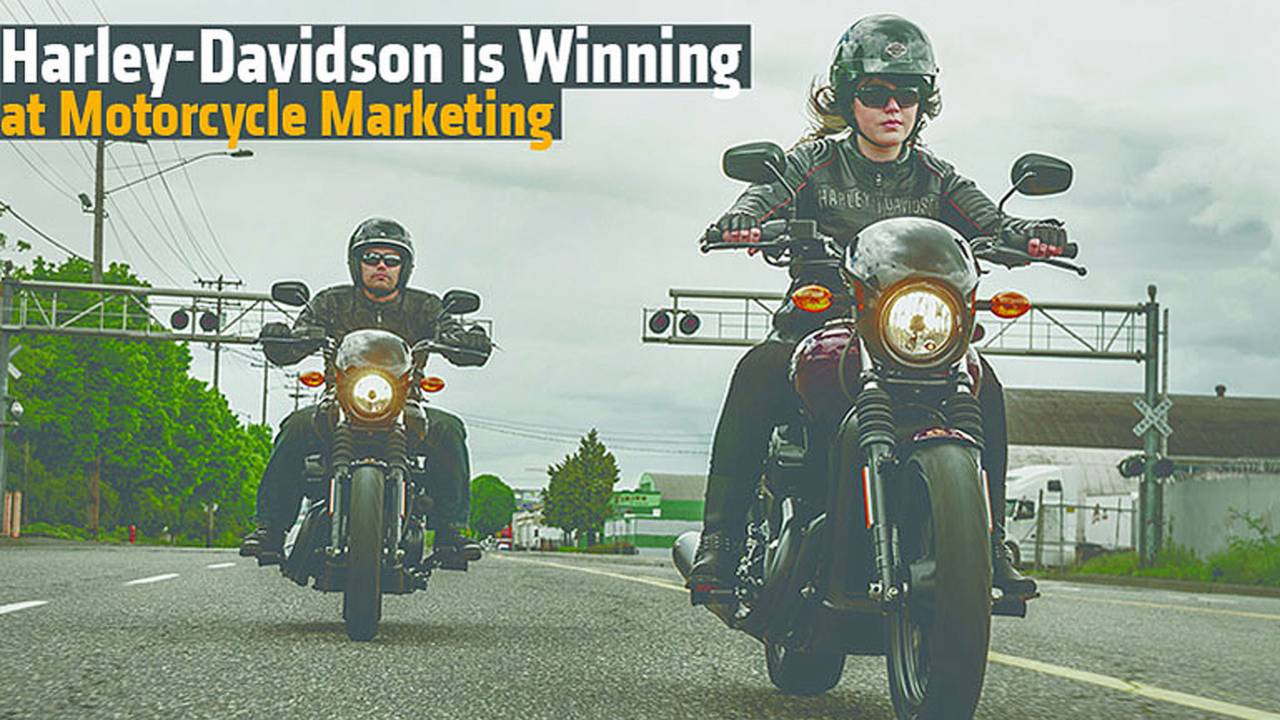 I got to spend some time at the Progressive International Motorcycle Show this weekend in Washington D.C. It's not the biggest iteration of the show, but it was filled with all kinds of two-wheeled goodness, and some new three-wheeled toys (ones that aren't called Slingshots).

What I was more interested in was how one manufacturer won the marketing war for the entire show, and despite me calling out Suzuki for a lackluster line up (click the link below), they finished second for a great fan experience.

READ MORE: What Was Your Favorite Moment in Motorcycling in 2014?

Say what you want about Harley-Davidson, but the mainstream media gets it wrong on the brand's demographics. While the majority of their buyers are over 50 and white, they sell more bikes to minorities and women (Source: Dealernews.com and Polk Data) than all other manufacturers combined in the US. Chew on that for a second. Let it marinate and realize that H-D sold over 220,000 plus motorcycles in the first nine months of 2014 (Source: H-D Quarterly Sales Report). BMW was roughly half of that in the same time period (Source: BMW Quarterly Sales Report). Yet H-D is considered out of touch and BMW is hip and modern.

Here is one of the reasons why H-D is winning on those non-traditional categories. At the show this year and for the last several years H-D has set up a Fat Boy on a chassis dyno roller that riders with no experience can jump on and learn to shift and work the throttle.

In the middle of the show floor inside they are letting people run their motorcycle. The staff was super friendly with both men and women instructors catering to new and non-riders alike. The wait was over an hour long for most the day. No other vendor had even close to that type of attention.

H-D's booth was surrounded by vendors with giveaways, talking microphone-wielding pitch men, and booth girls. But only Harley-Davidson had a running motorcycle. Well, technically there was one other bike. H-D had brought the Live Wire to the show and guess what it was doing. Yep, it too was running on a chassis dyno roller; people got a chance to twist the grip on their electric motorcycle.

A year ago my wife took the opportunity to ride the Fat Boy on the roller. She had never ridden a bike as the rider, never shifted, and still talks about it when we meet people. That is winning in the marketing world.

The only other manufacturer who did something unique was Suzuki. With the possibility of the Recursion going into production and this small nugget of hope 2015 could be a banner year for the brand.

The bike they had was not running; it was for hero shots only. It did give you the chance to look like you were dragging a knee, and the girl taking pictures was worth stopping by to check out as well. People were once again lined up for something that wasn't straight out of the late Billy Mays playbook of salesmanship.

Glad you asked. My point is you can't just build a better bike and survive in business. You have to be able to talk about the product, engage riders in the product, and create your own market loyalty. Harley-Davidson does this as well, if not better, than any other brand.

People who ride H-D's tattoo the logo on their bodies, not one time, but usually several. That's a rider with passion about their motorcycle choice and not someone who is going to be swayed by a stopping distance 2 feet shorter or 10 more horsepower. In the battle of marketing H-D is way ahead.

The topic of H-D steadfastly clinging to a dying ship is often portrayed by the media, other riders, and even investors. When you look at the sales numbers, market growth, and expansion into non traditional markets like India H-D is poised to stay on top of the sales heap for quite some time. H-D spent last year throwing parties all over India and selling their lifestyle and custom scene to the masses. India is a hot bed for custom motorcycles, small "postie" bikes and was one of the first places to get a Street 750 from corporate H-D to customize.

So tell us do you agree or disagree? Will H-D stay on top, do you think they are a dying brand, and tell us why.

If you have not seen the bike from Rajputana Customs check it out below.