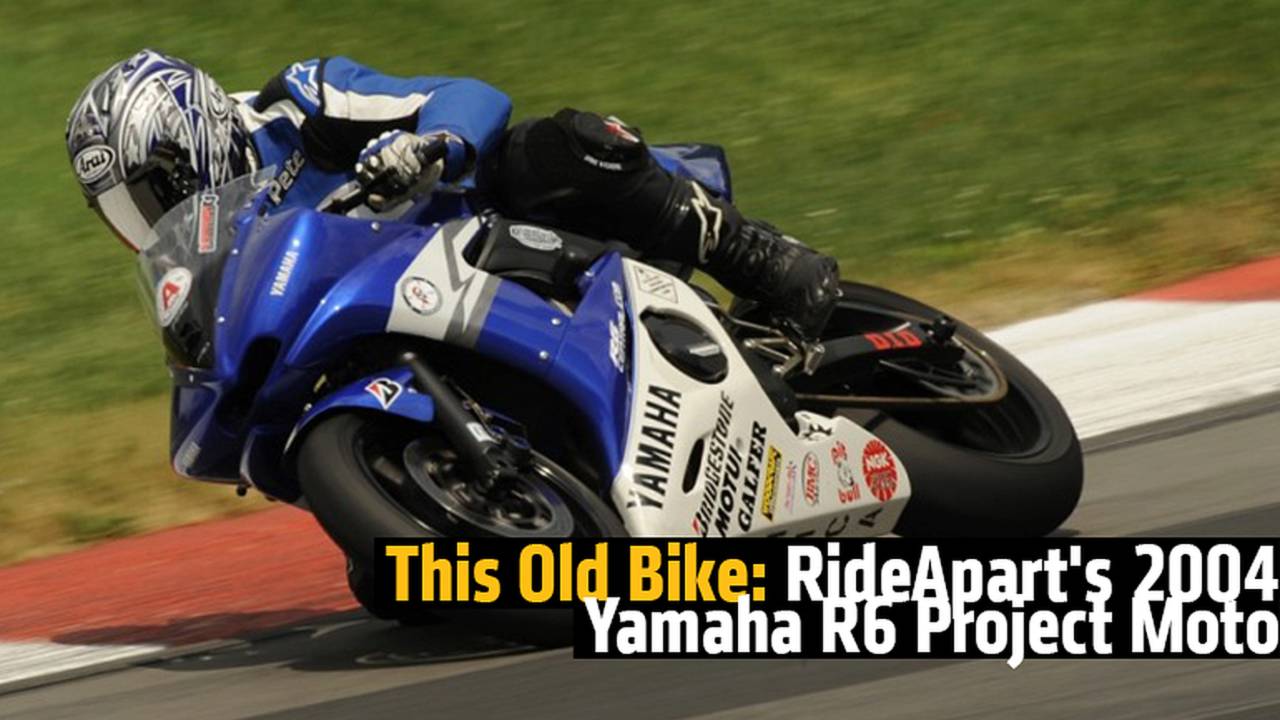 Our retired Yamaha R6 will be going through some changes in the coming months. Meet the Old Bike, RideApart's tired, but still lively, project bike.

A few months ago, we wrote about the reasons you should stand by your old bike. Much of the thought process surrounding that article centered on refreshing and restoring what you have, and finding out it's not so far off from the new stuff as you might've thought.

Over the next few months RideApart will be bringing you a series of articles that will show you how to maintain your old bike. The guinea pig for this project will be beloved 2004 Yamaha R6.

The second-generation R6 was an immensely popular bike with a rock-solid platform for any sort of sport riding. It was a weapon in any race series, a comfortable and capable street bike—and despite some faulty ignition parts in the 2003 edition—remarkably reliable. Bone stock, it made good power and torque, was fuel injected, and provided a lightweight chassis that was the benchmark for middleweight handling at the time. It didn't look half bad either.

My R6 in particular has seen a steady influx of upgrades through the years. Performance upgrades include a full exhaust, Power Commander, ignition advance, aftermarket air filter, slide stops, velocity stacks, stainless steel braided brake hoses, and a 520 conversion with an assortment of rear sprockets. I had the forks rebuilt with GP Suspension internals, and replaced the OEM rear shock with a three-way adjustable model from Elka.

The bike hasn't been crashed too hard, has no known mechanical defects, and has been well maintained since I rode it off the showroom floor all those years ago. Also, the motor has never been opened and has never leaked. All things remaining equal, it's still a better bike than I am a rider.

Still in street trim, but all taped up for my first ever track day at Putnam Park, Indiana in 2005.

The Bad and The Ugly

An 11 year old bike has its drawbacks of course. While it makes good power, I'm missing at least 8 to 10 horses off the modern middleweights. As newer generations of the R6 have been released, parts have become not quite as plentiful as they once were.

It's no spring chicken by the odometer either. It has well over 20,000 miles on the clock, a fair percentage coming from the race track or drag strip. The riding position and frame geometry aren't as track-focused as the newer models either—meaning I have to work a little harder to hustle the old bike through the corners.

The wear and tear I've put on the machine has eventually came with consequences. The bike runs a bit hot, probably due to build-up in the cooling system. And I suspect that the clutch, which is original to the bike, is finally starting to slip.

But the worst of it is that I'm shredding tires like a politician shreds papers before an investigation. During my trip to Jennings last spring, I completely destroyed a brand new rear tire in about two hours of track time. Then one of the seals in the shock started to let go, dousing my left boot with oil and ending my day early. For lack of time to have it fixed, this meant the bike sat on its stands in the garage all of last summer. The shame!

Carving through turn 2 at Jennings GP, Florida. What you can't see is the destruction of my rear tire happening at this very moment.

Thankfully, almost all of those things can be fixed and we're going to take you along for the ride. We hope to show you that your old bike can be nearly as fast, and just as fun, as any of the newer stuff rolling out of the factories these days. We love new bikes and getting one might be the easiest way to fix all your old bike's problems. But if you can't get one for whatever reason, we hope that this series shows you that you can breathe new life into an old one.

What old bike are you bringing back out of retirement? What should we do with our project bike? Leave your ideas in the comments!