Flat Track Racing at Del Mar; Where it Was and Where it's Going 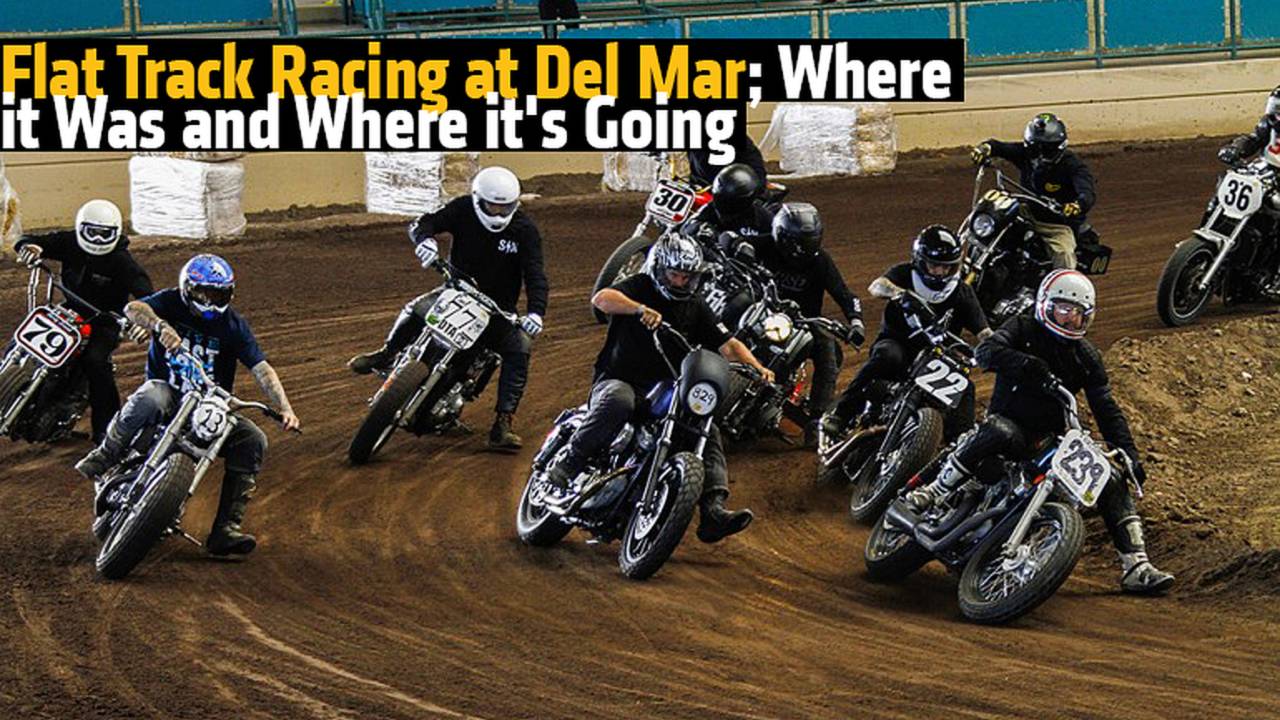 The IV League at Del Mar Fairgrounds is exactly why flat track racing is making a comeback in the best of ways and for all the right reasons.

“Flat track racing has long since been dead and we’ve been trying to bring it back,” said Brian Bell promoter of the new IV League Flat Track racing series. While flat tracking has been around in small quantities throughout the country, it’s definitely lost it’s popularity of yesteryear. Luckily, there’s been a recent resurgence of guys like Brian trying to bring it back to it’s once former glory. Hopefully, it’s not simply a short-lived hipster phase where current attendees will say, “That's so last season,” when it returns next year.

A track normally reserved for horse racing, it was the perfect indoor venue with upclose stadium seating. The two-day event started with heats and practice Saturday morning followed by main events at 4pm. Sunday started earlier with heats at 10am and mains at 1pm.

Depending on the size of the field, mains were A and B (although most were just A races). Despite the average 200 riders in attendance, most racers entered multiple classes.

The racing series has done a great job with hype and publicity, holding events like: Race and a Movie airing On Any Sunday, after the Valentines Day race. Now, the question has to be asked, will they return next year? With more venues (auto or motorcycle) closing around us, did the event make enough to come back?

Yes. According to promoter Brian Bell there’ll be at least 3 dates (but hopefully for more) between December and March of 2016.

He’s also hoping to move races further into LA, but doesn’t want to say which tracks yet as it’s too early in planning. “Since we got Del Mar we’ve had a lot more opportunities open up," said Brian. “I don’t want to be too detailed in case we promise one and get another. We’re working with the ones that have the best relationships with.”

Flat track racing hasn’t been to Del Mar for over 7 years and this being the first with the IV League. “We were very happy with the event, it was our first year so it was an experience no matter what,” said Brian. “We came out of there pretty much even... It’s now become self-sufficient, so we can do it next year without having to scrape the bottom of our bank accounts to make it happen.”

Next season they hope to shrink the classes to make it more enjoyable for fans. This year they featured 30 classes, with many riders running in several classes at once, as each race was short. Next year they anticipate around 15 classes. “So it’s not 3 1/2 hours of watching bikes go around in circles,” said Brian.

They hope to start running more beginner/novice classes and move those to the morning, the intention being more new entries and less pressure for first-timers.

For the 2015 seasons IV League averaged 200 riders per race. “It made a significant dent in the sport,” said Brian. For the Del Mar season finale, Brian was able to actually enjoy the event himself, “I got sick of just watching it and actually was able to enjoy the race that I help put on.”

With supporters like Roland Sands Designs and The Moto Attic, the racing will continue to grow.

So You Want to Race

So, you want to be on the other side of the lens and participate in a flat track race? No problem. Don’t have a flat track bike? No biggy. “We run classes for everybody,” said Brian. “Next year, we’ll start running more novices classes in the morning.”

“If you have a bone stock dirt bike, you can take it out of the garage and run it,” said Brian. “Broken down into skill levels, so there aren’t pros running against beginners in the same class.”

He finished by saying, “If it has two wheels and a motor, we’ll race it.”

Want to help RideApart build a bike for next season?