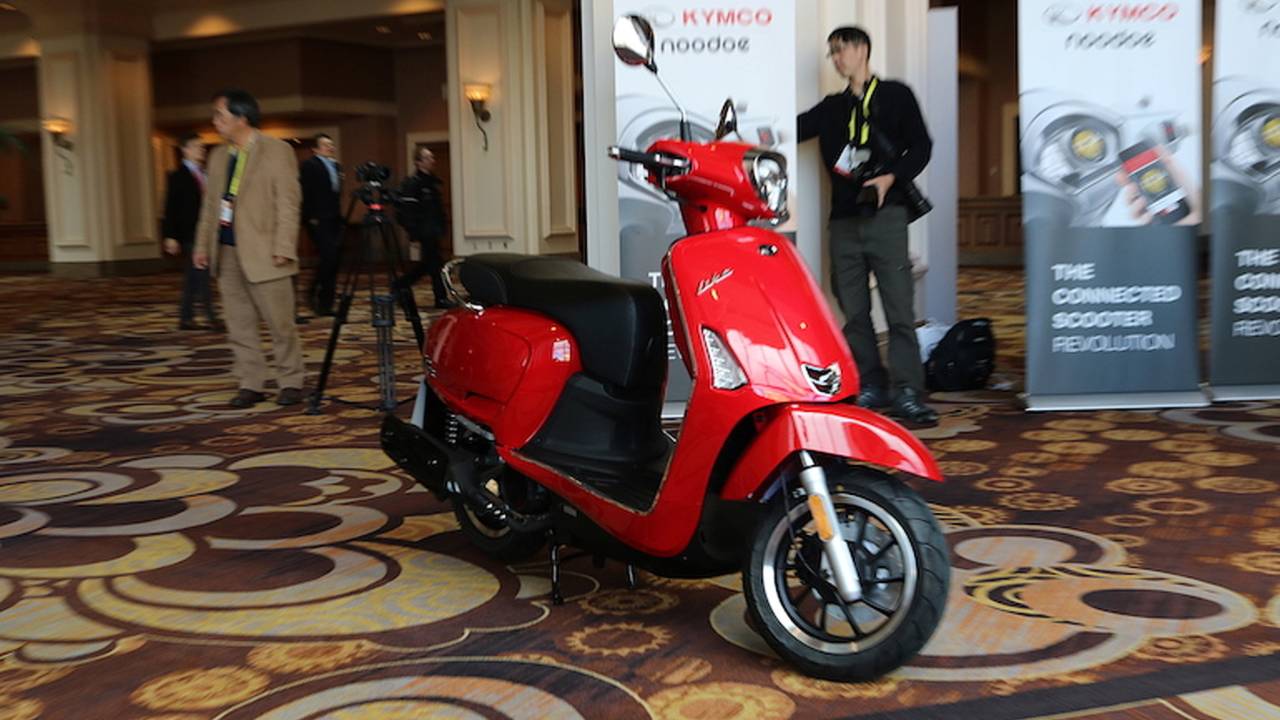 With the Kymco Noodoe scooter users will be riding into the future.

Bringing the sort of connectivity features that are commonplace in cars to the scooter world presents some challenges. Trying to look down at a detailed map or manipulate a touchscreen while also keeping two hands on the bars could be seriously risky.

“Do you really think that scooter riders can absorb all that information?” asks Kymco Group Chairman Allen Ko. “A touchscreen is very difficult to use when you ride a scooter.”

That’s why the Kymco Noodoe focuses on simplicity above all. On display at the Consumer Electronics Show (CES) in Las Vegas this week, it’s a new app-connected color display that will be offered as standard on the Kymco AK 550 and as an option on the brand’s Like 150i scooters.

The scooters have a circular color screen that’s controlled by three switches next to the rider’s right thumb. Various screens can show a weather forecast, a digital speedometer and trip computer, and a “Smart Compass” navigation function. It all operates over a Bluetooth connection to the rider’s phone, running the Noodoe app.

The weather forecast only shows the forecast for the next three hours, assuming that’s most relevant for scooter riders – in other words, answering the question: "Am I going to get soaked on my way home?"

The Smart Compass doesn’t show a traditional map or street names so as not to distract riders who may only glance at the display briefly. Instead it shows only the distance and relative direction of the destination that was chosen in the Noodoe smartphone app. Another feature shows the location of points of interest, like gas stations or service centers, as small icons on the display – again, without streets specifically marked. The app also helps you find your Kymco scooter by showing a compass indicator to the last place you parked it.

There’s a big social function to the accompanying app, which powers the display via Bluetooth. You can create a VIP group of friends and see their location on your Smart Compass when they’re riding nearby.

Perhaps the most unusual feature is the ability to customize the look of each of the aforementioned display screens. Using the app, users can change the color and design elements of the screen and upload it to their scooter. There’s an online library that lets users share designs with one another. You can even take a photo and upload it; Ko jokes that if you put an image of your family members on the display, you might ride more cautiously so as to ensure you get home to them safely.

Of course, no app-connected system would be complete without the ability to show notifications for everything from Facebook invites to incoming emails. But the Noodoe can only show notifications in Stop Mode, i.e., when the scooter’s speed is zero. The idea is to prevent riders from pulling their phone out of their pocket at stop lights. The app can, however, lock out the notification screen if it detects that the scooter is in a city or region that bans such features.

For now, this type of app integration is pretty new to the scooter world, but Ko is optimistic it will spread over the coming years.

“I think that after five, 10 years, every scooter will have something like that,” the Kymco chairman says.