The Mecum Auction in Las Vegas on the last weekend of Jan, 2017 includes these four fabulous Ducati race bikes.

Late January in Las Vegas has become Auction Central USA. A few years ago, a handful of competing auctioneers were vying for top dog spot in the annual gathering, which has now been winnowed to two, Bonhams and Mecum, in separate crosstown venues.

Bonhams, the traditional old-world style auction house, offers up a few hundred machines, with a higher per capita percentage in the $100,000-plus range. Mecum, a high-volume auto auctioneer, rolls out closer to a thousand motorcycles, and is nominally a better showcase for bargain hunters and sellers trying to thin the herd.

This year Bonhams is presenting 38 Ducatis, the majority of them vintage beveldrive models, a few if which are certified rarities with asking prices to match. The Ducati twins of the early Seventies, commonly called the roundcase engines, connect directly to the company’s return to glory in international road racing, and Paul Smart’s victory in the ’72 Imola 200, effectively the launch of the Superbike era.

Figures for the subsequent production model, the 750 SS, are lost to history, but educated guesstimates by scholars of the marque put the number at about 400. A ’73 greenframe sold at the Bonhams auction three years ago went for $137,000. Five years earlier they sold a nice, though not entirely “correct,” ’74 example for $50,000.

Scant few of these machines remain in original form, though the example offered at the Mecum auction this year appears to be one of them. 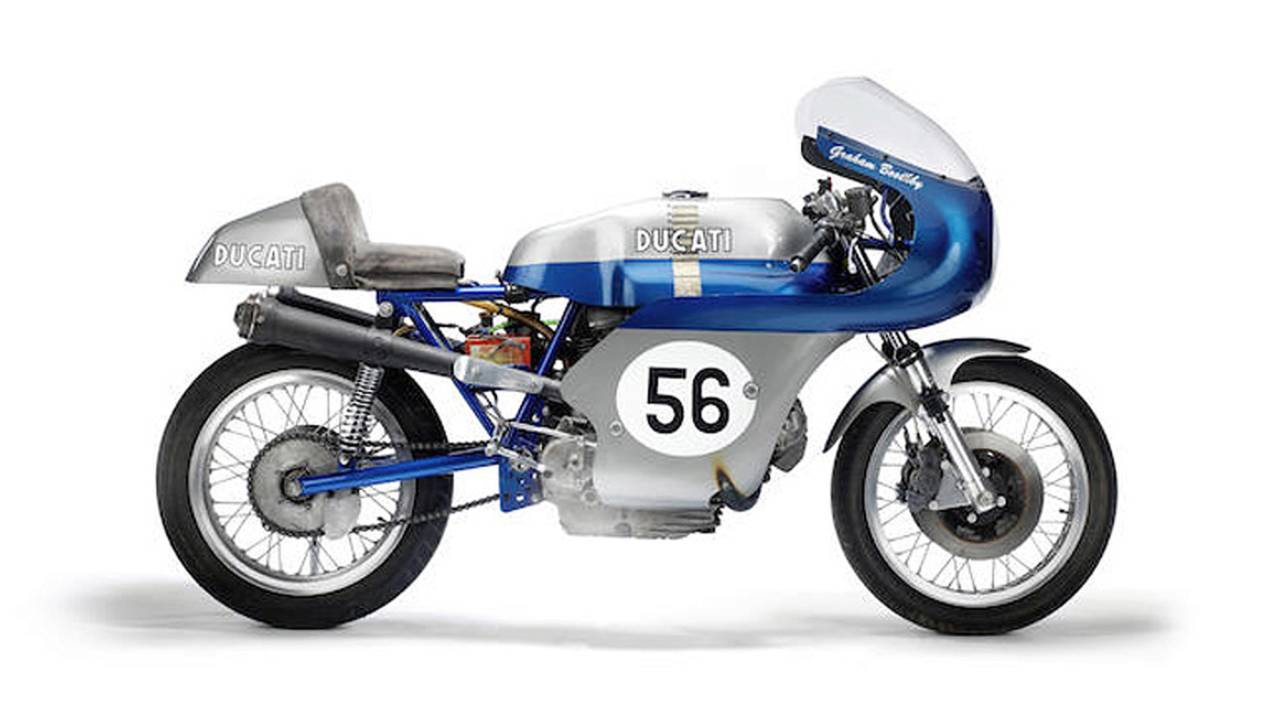 The ’73 Ducati 750 at Bonhams is listed as one of the three short-stroke racers built for the 1973 season, with a revised valve train, higher compression and a custom chrome-moly frame. Power output was rated at 89 hp @ 10,000 rpm, with a subsequent reduction in low-end torque. Factory rider Bruno Spaggiari again finished second in the Imola 200, behind Jarno Saarinen’s Yamaha 350. Ducati engineer Fabio Taglioni subsequently increased the V-twin to 864cc, which won the demanding 24 Hours of Montjuich in its debut race.

One of the bikes eventually went to former Triumph racer Percy Tait in England, when it had been refitted with a 750cc engine to race at the Isle of Man. Tait later sold it to Brian Cull, whose brother Steve rode it to the Irish Road Racing Championship in 1976. Bonham’s has listed the bike at $100,000 - 140,000.00 without reserve. 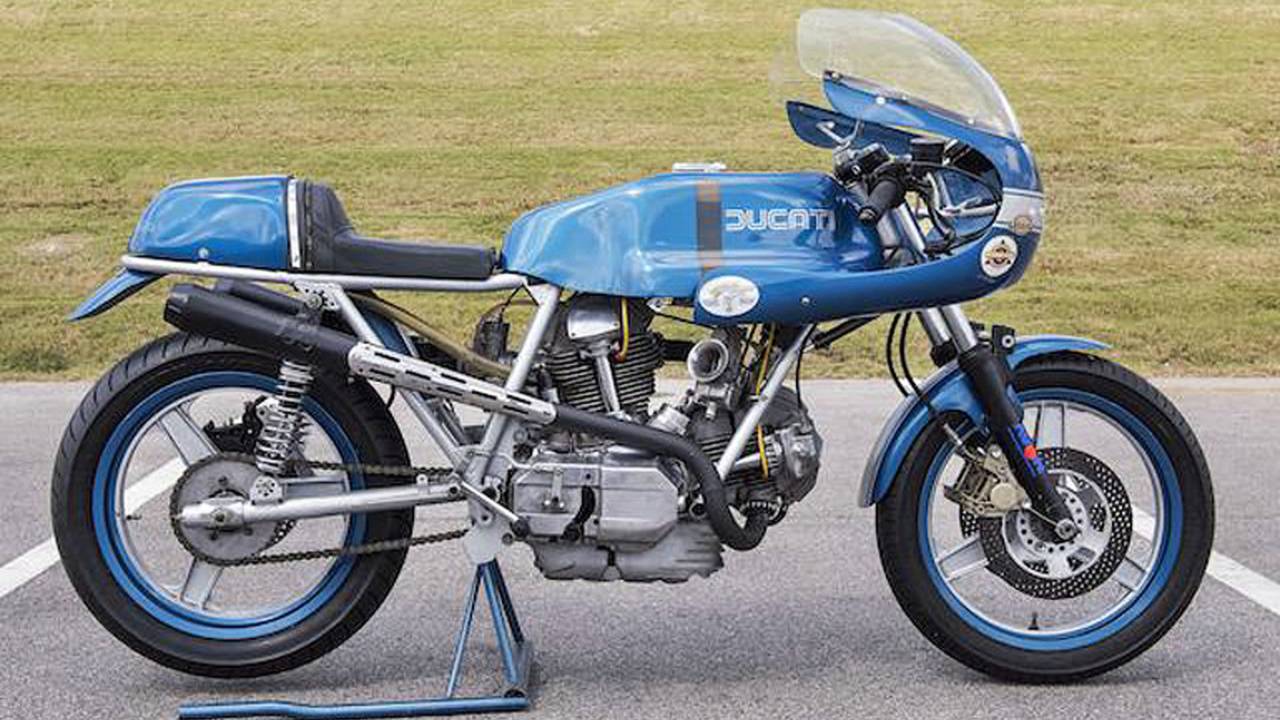 The 1975 Ducati racer was built by George Vincensi of Massachusetts, and ridden to victory by Rich Schlacter in the 1979 Loudon Superbike race. Originally a prototype of the 900 SS road model, the 864cc engine was fitted in a 750 SS frame. Kurt Lentz finished sixth in the first AMA Superbike race at Daytona in 1976. Following Cook Neilson’s 1977 win at Daytona, Reno Leoni, Jimmy Adamo and the Vincensi/Schlacter team carried the Ducati banner in Superbike racing. In 1981, in the premier Battle of the Twins race at Daytona, Schlacter was a last-minute entry and started at the back of the pack. He rode through the 65-bike field, posted 162 mph on the banking, and nearly nipped winner Adamo at the line.

The original pre-desmo Ducati 125cc racer of 1956 was dubbed the Bialbero (two camshafts). The popular singles were campaigned throughout Europe by privateers, including a young Mike Hailwood. The 17-hp single revved to 12,000 rpm, and in a package weighing under 200 pounds, was good for over 100 mph. 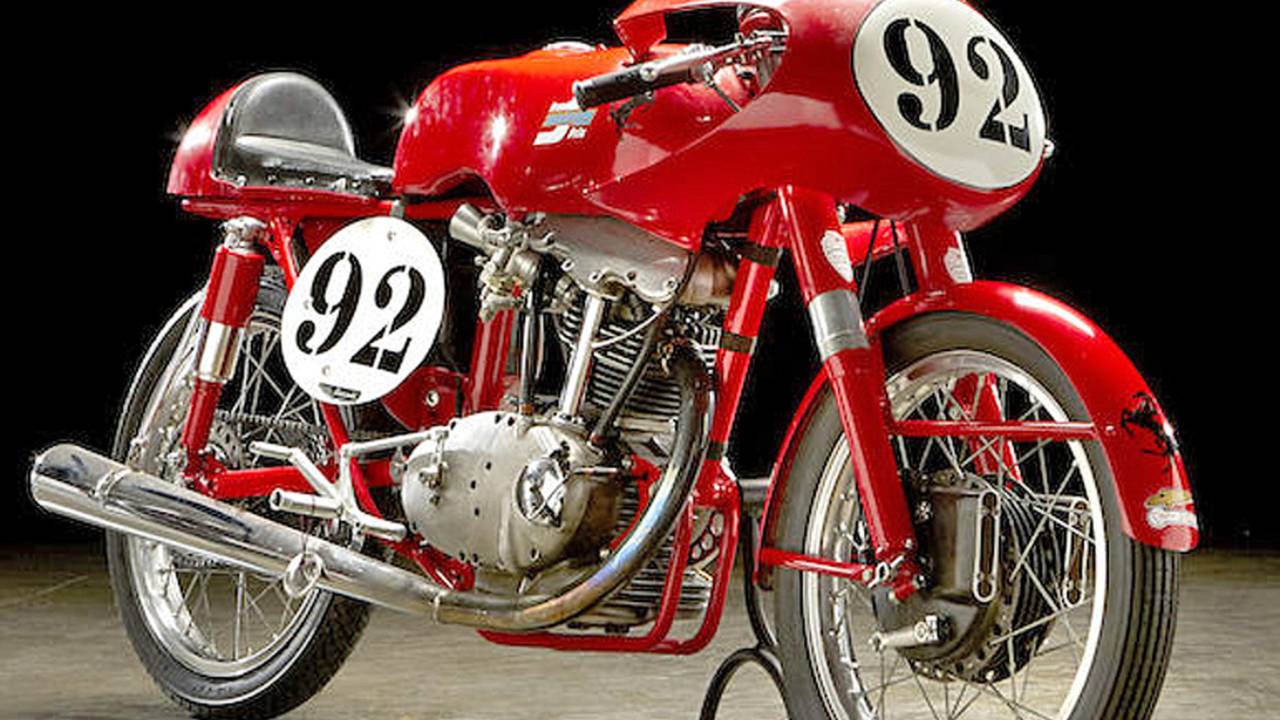 This Bialbero, a recent restoration, carries a certificate from the Italian Motorcycle Federation. Listed at $100,000 - 130,000

The 1984 Ducati TT1 750 is listed as one of three factory endurance racers. Based on the earlier 600cc TT2, three were taken from the original run of 50 to be fitted with the 750 engine. The factory replicas of Tony Rutter’s race bike, one was bought by American enthusiast Dale Newton. The belt-drive Pantah 650cc engine was taken out to 748cc, and in race tune reportedly developed more than 90 horsepower. Race ready, it weighed about 300 pounds. (Papa himself once got to sit on this bike on display, and describes it as “exquisitely tidy.” – Ed.) 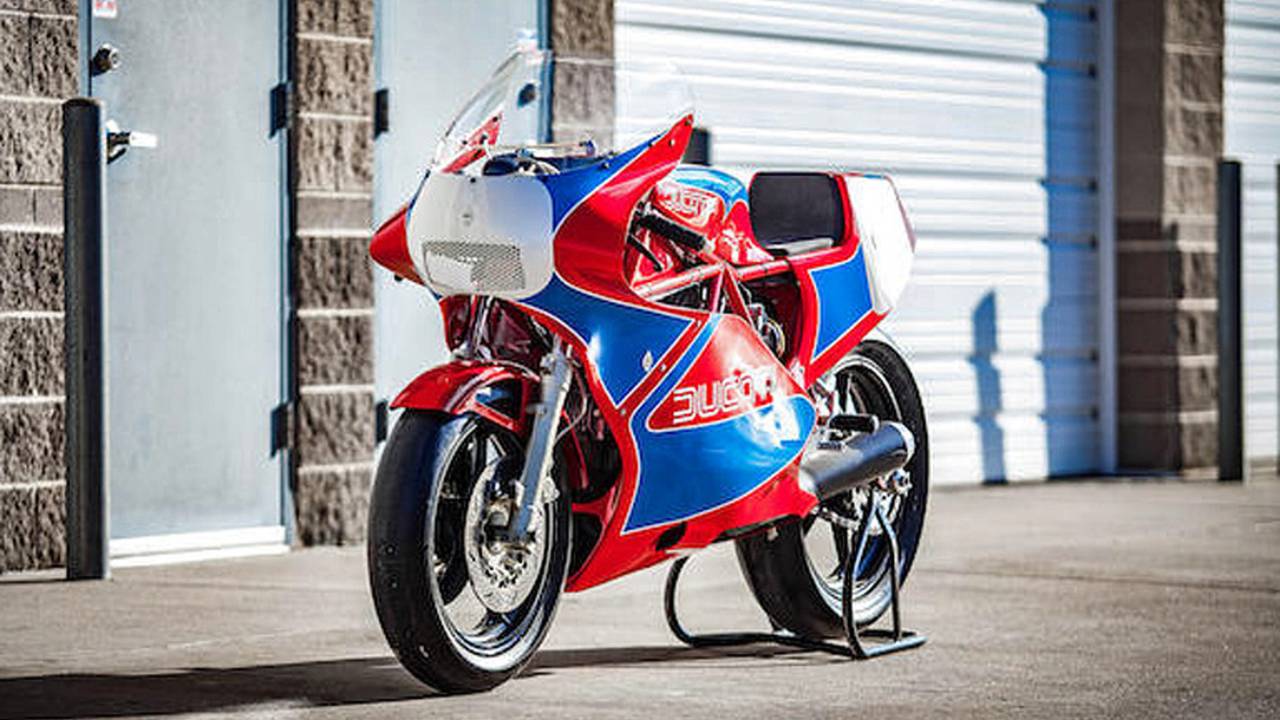 The bike is equipped with a Marzocchi magnesium fork, Brembo brakes, and a factory-only wider aluminum cantilever swing arm to take a wider rim and tire. It retains the endurance racing-spec quick-release rear wheel kit. Under Newton’s ownership, it was raced by John Williams, the story of which appeared in the April 1985 issue of Cycle magazine. An extensive history file comes with the bike.