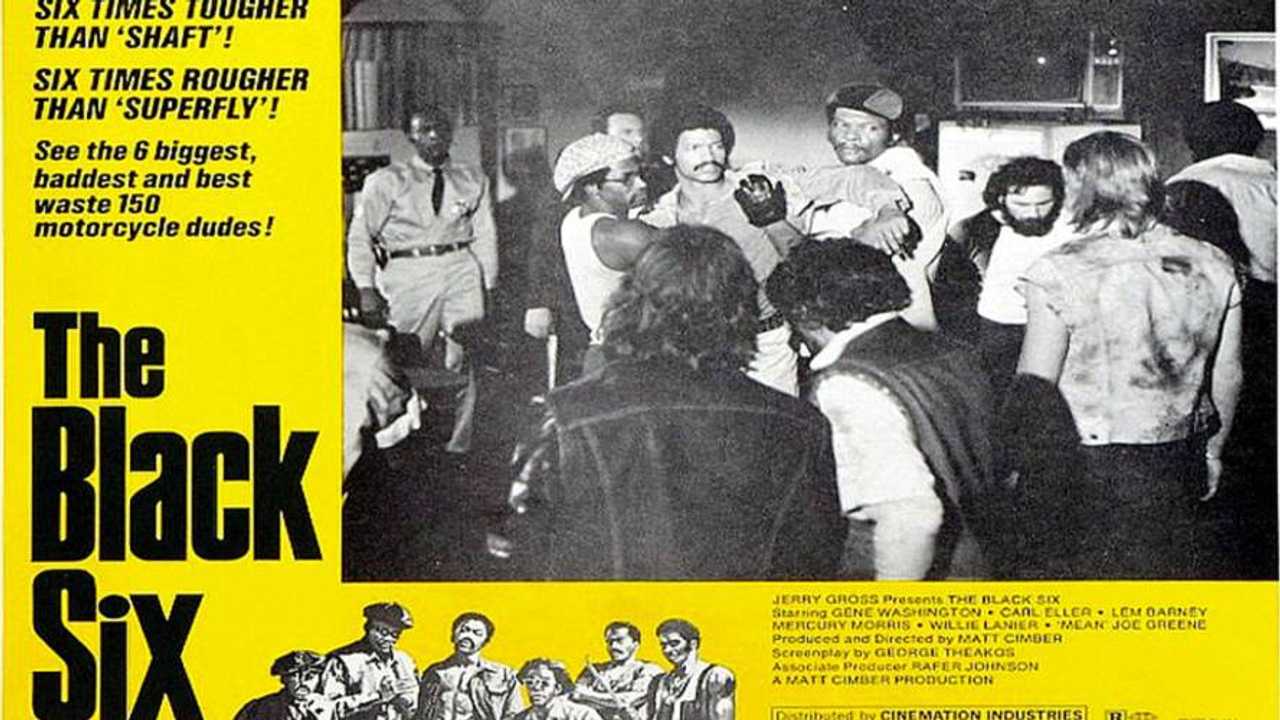 Mixing the blaxploitation and biker movie genres, this 70s film has all the ingredients to be a cult classic. But is it worth watching?

With elements of blaxploitation, and biker movie genres, plus well known NFL stars, this movie should have been box office gold, instead it went nowhere and is on YouTube for free. Perhaps if the production team had hired a handful of actual professional actors things would have turned out differently, but at least it appears these professional athletes can ride motorcycles, even if they can barely act.

The plot is simple enough, and simplistic really: Eddie is a promising high school football player in some random racist town who runs afoul of the Nazi biker gang when he is caught dating one of their sisters.The gang may have gotten away with straight up murdering him if not for the fact that his brother also rides in a gang, called the Black Six. These guys aren't about raising hell, they are all basically walking the earth like Caine in Kung-Fu (or riding the earth like Jim Bronson) working odd jobs, helping people out, and changing the minds of racists. There is a great scene, perhaps the best in the film, where they preach "peace and love, peace and love, brother" before literally destroying the greasy spoon diner that wouldn't serve them.

If a guy the size of Mean Joe Green grabs you like this, you better hope all he wants is a kiss.

These guys must have been demolition experts in Vietnam

The rest of the plot involves them rolling into town, investigating the murder, and trying to avenge it. Of course, trying to cover the blaxploitation angle, there is also a pimp, a prostitute, and a pool hall involved. In the end, the small town white supremacist gang calls in reinforcements and a huge battle takes place. The internet will tell you all six of the leads were supposed to die at the end but they forced script changes. Now the ending is ambiguous, but over the mayhem a title card warns "...hassle a brother, and the Black Six will return"

Rotten Tomato Rating: No Tomatometer, but the audience rates it 37percent, IMDB has it at 3.6 out of 10.

RideApart Worth Watching: I would rate this one a 6 out of 10. If you are a fan of these guys from their football days, or like blaxploitation, I would definitely suggest this. If you are looking for a goofy biker movie as background noise this is also a good one.

Worth Noting: The best part of this movie is the classic, funky, blaxploitation soundtrack. The music is all wah-wah guitars and horn section stings. That is one of the things that makes this such a great background movie. There is even an original theme song called The Black Six.

What to Watch for: Because of the low quality of all the copies online, its fun to try to ID exactly what bikes were used. The movie credits a local Triumph dealer with the six main bikes, but all the outlaws are on random choppers and customs. I did spot a Honda CB750 with a Captain America paint job on the tank. If you do figure it and and can take screen grabs, the folks at the Internet Movie Car Database would love to hear from you.

This is best online copy of this movie I can find on YouTube, or you can rent it, or pick it up cheap on a DVD 4 pack from Amazon.