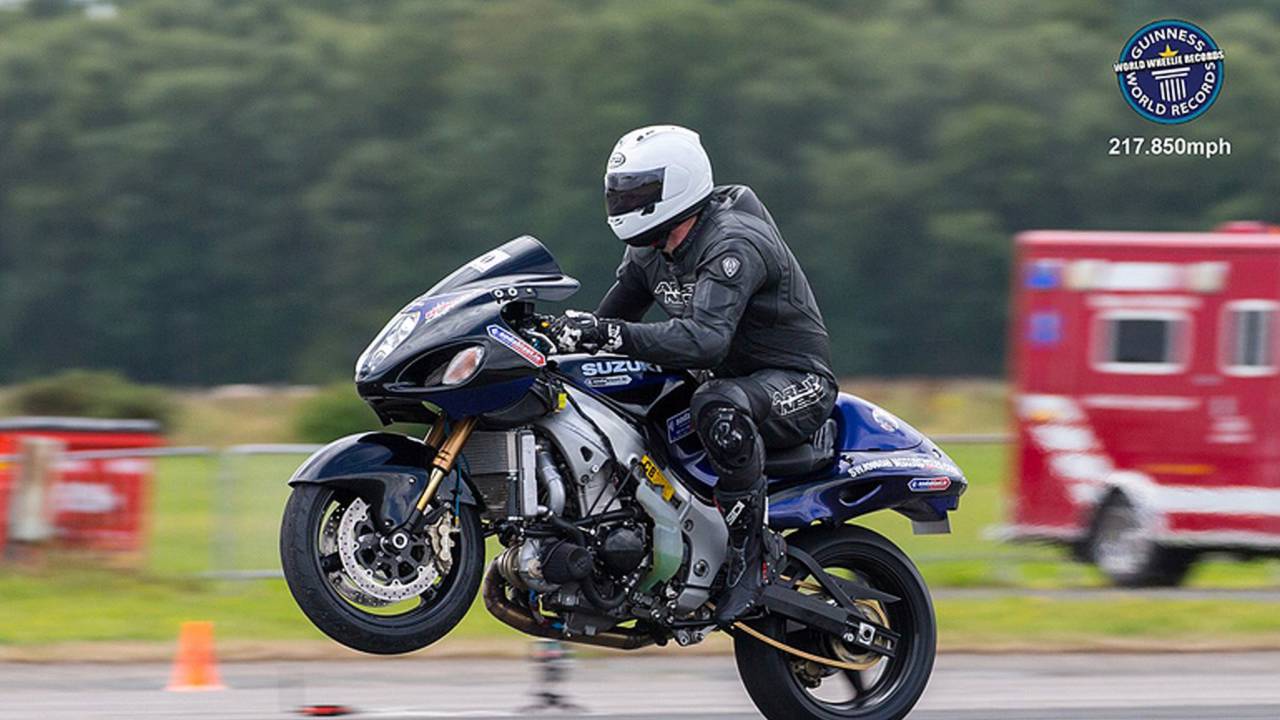 Suzuki Hayabusa rider has set a new Guinness world record for speed on one wheel at almost 218 miles-per-hour.

According to Motorcycle News, Hayabusa rider Ted Brady set the new Guinness world record of 217.85 mile-an-hour at the Motorcycle Wheelie World Championship at Elvington Airfield, North Yorkshire on Saturday, August 19, 2017. He set the new record on his second run.

READ MORE: How to Wheelie Like a Starboy in Three Years or Less

Brady eclipsed the previous record of 213.3 mph set in 2016 by Egbert van Popta. A speed-wheelie competitor for the last twelve years, Brady posted the new record figure aboard a turbocharged Suzuki Hayabusa that puts out somewhere in the neighborhood of “about 540 brake horsepower” according to the rider. Jack Frost of Holeshot Racing built the winning machine. Frost recently suffered the theft of his team van, which included his own land speed bike and several other motorcycles. Brady dedicated his winning run to Jack.

READ MORE: Why the Rev-Limiter Coaster Wheelie is the Dumbest Stunt Ever

Now in its twelfth year, The Motorcycle Wheelie World Championship is held at the ex-RAF Elvington Airfield. The riders must complete a full kilometer (0.6 mile) on the back wheel. The rider with the fastest exit speed recorded is the winner.

Several other riders entered the record books recently. Japanese rider Masaru Abe mantained a wheelie on his Yamaha Jog for an astonishing 310 miles, and Dougie Lampkin wheelied the entire length of the Isle of Man TT circuit last year on a modified trials bike. Speculation is now underway to determine what form the next mono-wheeling record will take.

Fans of speed in the UK and environs may be reminded that Classic Bike Live event is set for the East of England arena on October 28-29, with a club displays, swap meet and assorted fun and games. This year’s guests of honor are Isle of Man TT champion John McGuiness and famed chassis designer Colin Seeley.