Fear Does Not Exist In This Dojo - Riding Hazards of India 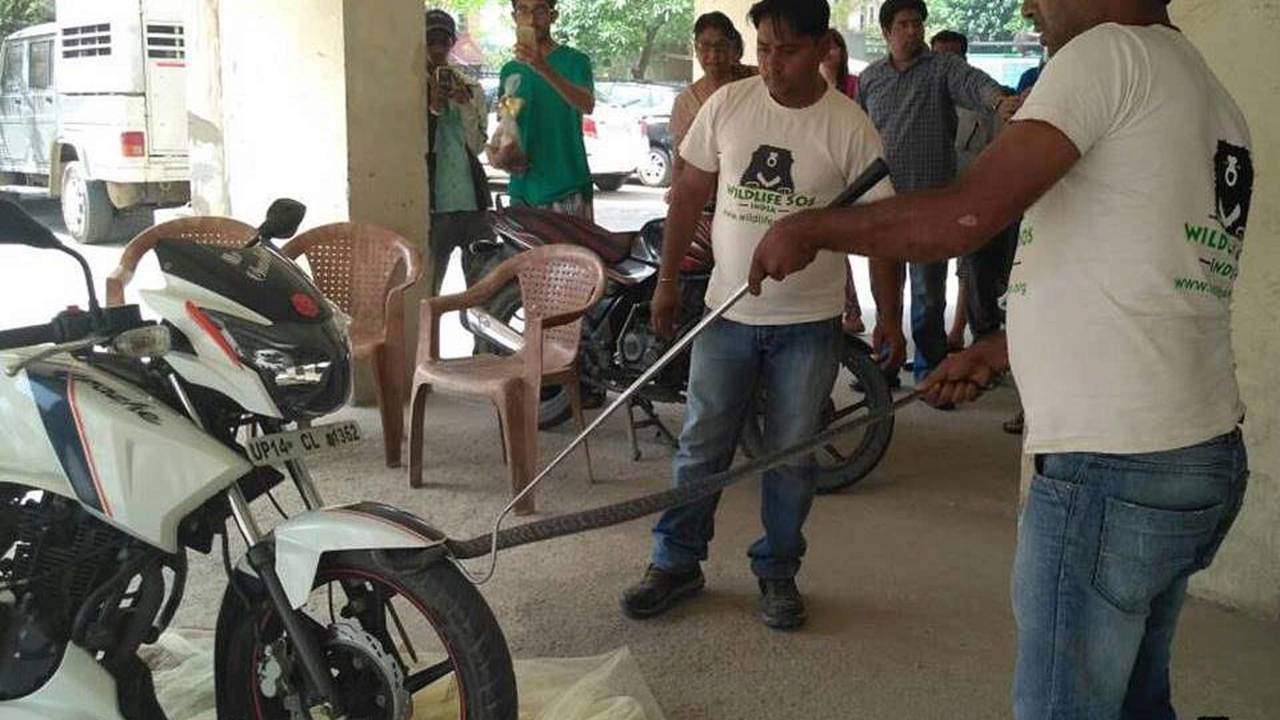 Road hazards come in all shapes and sizes but a five foot long cobra proved to be more than this rider from India cared to deal with on his own.

Most of us are familiar with the roster of hazards we face on the roads; sudden thunderstorms, inattentive car drivers, sand, gravel, deer, potholes, oil… The list goes on. But it rarely includes five foot long venomous snakes.

In a report from Wildlife SOS, a rider in Uttar Pradesh, India, was shocked to discover a cobra trying to hitch a ride in his bike’s front wheel. A quick call to conservation group Wildlife SOS solved the problem. The group’s been rescuing elephants, bears, leopards, and even cobras in India for more than 20 years, and runs a 24-hour hotline for such occurrences.

According to Indian newspaper The Hindu, "The sight of a cobra crawling up the front wheel of a motorcycle left the residents of Exotica East Square in Indirapuram in a state of shock." Snake rescuers from the NGO were surprised to see the snake wedged tightly between the motorcycle's frame and wheel. The team needed nearly 30 minutes to extricate the reptilian hitchiker, which was safely transported from the area.

“The cobra was about five feet long," said Wildlife SOS co-founder Kartick Satyanarayan. "We’re happy that did not try to handle the animal himself, which is extremely dangerous. Our team conducts snake rescues and surveys across the country to encourage people to handle such incidents in a sensible manner.” According to the Times of India, snake bites killed 46,000 people in India in 2011.

(Wildlife SOS is one of the largest rescue and conservation charities in South Asia, operating 10 wildlife rehabilitation facilities across India. This includes the world’s largest sloth bear rescue center and the recently established Elephant Conservation and Care Center, which is the first of its kind in India and currently houses approximately 25 rescued elephants. WSOS also runs a tribal rehabilitation project and creates alternative livelihoods for poachers and other indigenous communities that once depended on wildlife for a economic sustenance. WSOS also operates a leopard rescue center, a wildlife hotline in New Delhi and Agra, and Forest Watch, which is an anti-poaching wildlife crime enforcement unit. More information about the organization can be found at www.wildlifesos.org. The U.S. branch of Wildlife SOS is based in Salt Lake City, Utah.)