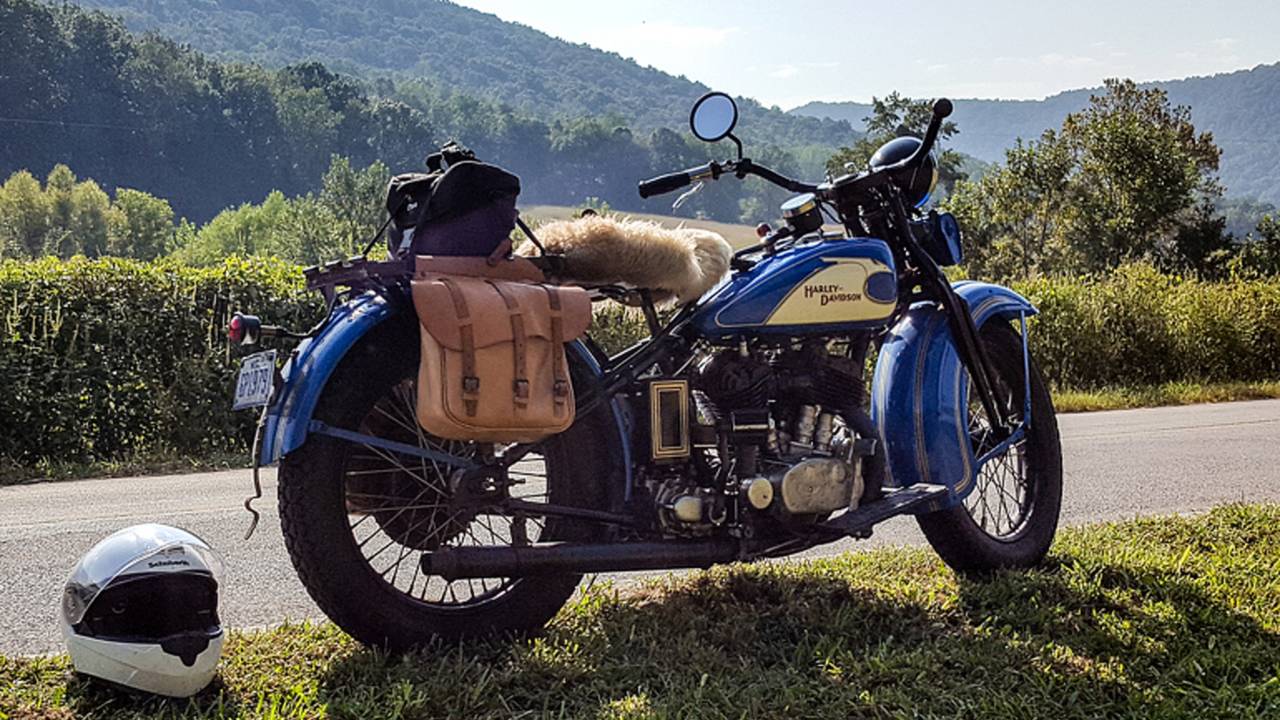 Of course sometimes things go wrong that you can't just fix, no matter how many tools you shove in your tool roll, but that is just part of the adventure...

When you are traveling on an 84-year-old motorcycle, you have to be prepared to make an adjustment or two along the way.

Whether it is a tweak to the carburetor, tightening the rear chain or changing the spark plugs, you'd better make sure you have the necessary tools and parts in your bag – or an easy roadside fix can quickly turn into a long ride home in a trailer. Of course, sometimes things go wrong that you can't just fix, no matter how many tools you shove in your tool roll, but that is just part of the adventure of riding old iron. On my last trip to Chattanooga, Tennessee, I got to put my skills to the test in a uphill battle to get my 1933 Harley-Davidson VL over the Blue Ridge Mountains and back. As always, there was a bit more "adventure" than I had planned for.

My preparation for the 400+ mile ride to Tennessee was typical of my rides this summer. I started by spending weeks waiting on parts, only to have them arrive just in time for me to spend a few sleepless nights frantically trying to get everything put back together, like I was on some kind of reality TV show. This time I needed to swap out two cams and tappets, a job that requires pulling the motor out of the frame. Probably not the best choice for tackling the weekend before a 5-day run. Regardless, I got the motor back together, mounted it back in the frame and had everything running with about a day to spare.

This photo was taken four days before I left for Tennessee. Just a few things left to finish up.

Thinking ahead, I had allotted two days for my ride from North Carolina to Tennessee. That way I could take my time and not push my motorcycle too hard on the highway after just doing some major engine work. The ride started out great. I headed out on a cool Tuesday morning, rolling on the throttle as I shifted through the gears (Read more about how to ride an antique motorcycle here). I hit the Interstate and was soon cruising at 60 mph in light traffic. Everything was going according to plan and I was looking forward to a uneventful ride into western NC.  That blissful ride lasted all of 5 miles before my motor started acting like it was starving for fuel. It wasn't long before I could no longer maintain the speed limit and had to pull over to inspect my fuel system. After a quick check, I found out my fuel strainer was filled with rust. That was a bit odd since I had new fuel tanks and fuel lines, but I just shook my head, dumped it out and got back on the road.

Where is this rust coming from?

Another 10 miles rolled by before I was having the same problems again. This time I was right around the corner from Down Home Harley-Davidson, so I pulled in and took up some of their shop space for several hours. Wanting to make sure I thoroughly cleaned my fuel system, I drained the tanks, blew out the fuel lines with compressed air, and disassembled/cleaned my carburetor. Through it all, I found no additional rust, so I figured I had this problem beat and was rolling again by early afternoon.

Matthew at Down Home Harley-Davidson was instrumental in getting my VL back on the road.

Well, everything was great for about 10 miles and then the motor started breaking up at high speeds again. I pulled over and once again the fuel strainer was filled with rust, this time more than ever before. For the rest of the afternoon, I had to pull over ever 5-10 miles and clean out the fuel strainer.  At one point I even removed the carburetor and totally stripped it down in a gas station parking lot to make sure it was still clean, too.

Even with all the right tools, disassembling a carburetor at a gas station is no fun.

By late afternoon I had only traveled about 70 miles and I realized that there was no way I was making it even halfway to Chattanooga. I needed access to somewhere secure where I could work on the bike; the gas station I was stopped at was not a likely candidate. So I broke out my phone and contacted my good buddy, Sean, who lives in Winston Salem. Turned out I was just about one fuel strainer cleaning away from his place and I soon found myself pulling my VL up onto his patio for a night of work.

Under the back porch light and ready for evening repairs.

Again the carburetor came off, but this time I soaked it in a can of carb dip that we picked up from the local auto parts store.  While it was soaking, I also decided to swap out my electronic ignition with my backup points set up, just in case the problem was in the ignition and not the carburetor.  It was sometime past midnight when I got everything back together, as getting the motor timed and the points readjusted seemed to take forever.  Of course, with everyone else asleep, I decided to wait until the next morning to see if the last three hours of work had been worthwhile.

I only left a few oil stains next to the hot tub...

The next morning I packed up my VL, pushed it around to the front of Sean's place, and gave it a couple kicks. As usual, the motor cranked right up and idled smoothly, but the real test would come once I got back on the highway. After a few miles of navigating through morning traffic, I finally made it back onto Interstate and eased the motorcycle back up to 60 mph. Ten miles later it was still running fine and as each mile ticked by on the odometer, I got more and more confident that I finally was going to make it to Chattanooga.

Met up with some friends on the way and loaded my gear in their truck. Also sometime before this photo was taken I lost my rear stand going down the highway.

By Wednesday afternoon, I had made it to Chattanooga after a long 300+ mile day. I checked in at the AMCA Road Run, then was off to meet up with my fellow riders. For the next three days we rode through the mountains of Tennessee, Georgia, and Alabama on some very challenging roads. We also did a little site seeing, taking tours of the Jack Daniels Distillery and Coker Tire Co. Throughout the ride, my VL performed flawlessly, climbing up steep inclines and racing through twisty mountain roads with ease.  I was finally starting to feel that I had all the bugs worked out and everything was running just how it should...

The great thing about AMCA Road Runs is you get to see some really rare motorcycles actually being ridden.

At the end of our final day of riding, the last obstacle we came to was a steep grade that ran uphill for a few miles. We were only about 10 miles outside of Chattanooga and as I downshifted into second I was already thinking about the dinner awaiting us in town. Halfway through the climb, I began to loose power and a horrible grinding noise began emanating from under my seat. I had no choice but to pull over on a narrow, grassy shoulder, doing my best with my antiquated drum brakes to keep my motorcycle from rolling downhill.

My first thought was my primary chain had come off or even broken, but after pulling the inspection covers I could see that it was intact. That pointed to a transmission problem and I began to fear that I had stripped second gear. There was nothing left to do but crank up the motorcycle and give it a try. I eased the clutch out in first gear and everything seemed fine as I accelerated back uphill. Then I shifted into second and the grinding started again. I managed to get up enough speed to shift down into third and limped the rest of the way up the mountain.  At the top, I pulled over in an old parking lot and called the chase truck. Without second gear, and a transmission filled with broken teeth, my ride was done.

My friends left me with one bottle of water to keep me alive while I waited for the chase truck.

Luckily, the chase truck was not too far away and I was only half an hour or so late to dinner.  On the plus side, I was given the award for "Best Restored," which was a big honor considering there were probably 200 or so antique motorcycles in attendance. After the awards ceremony there was nothing left to do but load my motorcycle in the back of my buddy's trailer and get some sleep before driving back to NC. I always like to say that "trailers are for boats," but with no one willing to let me borrow a transmission to get home, I had no choice.

All and all it was a great trip and although I wasn't planning on rebuilding my transmission, I'll have my VL back on the road and better than ever soon.

My new cluster gear on the left, compared to my used one on the right.