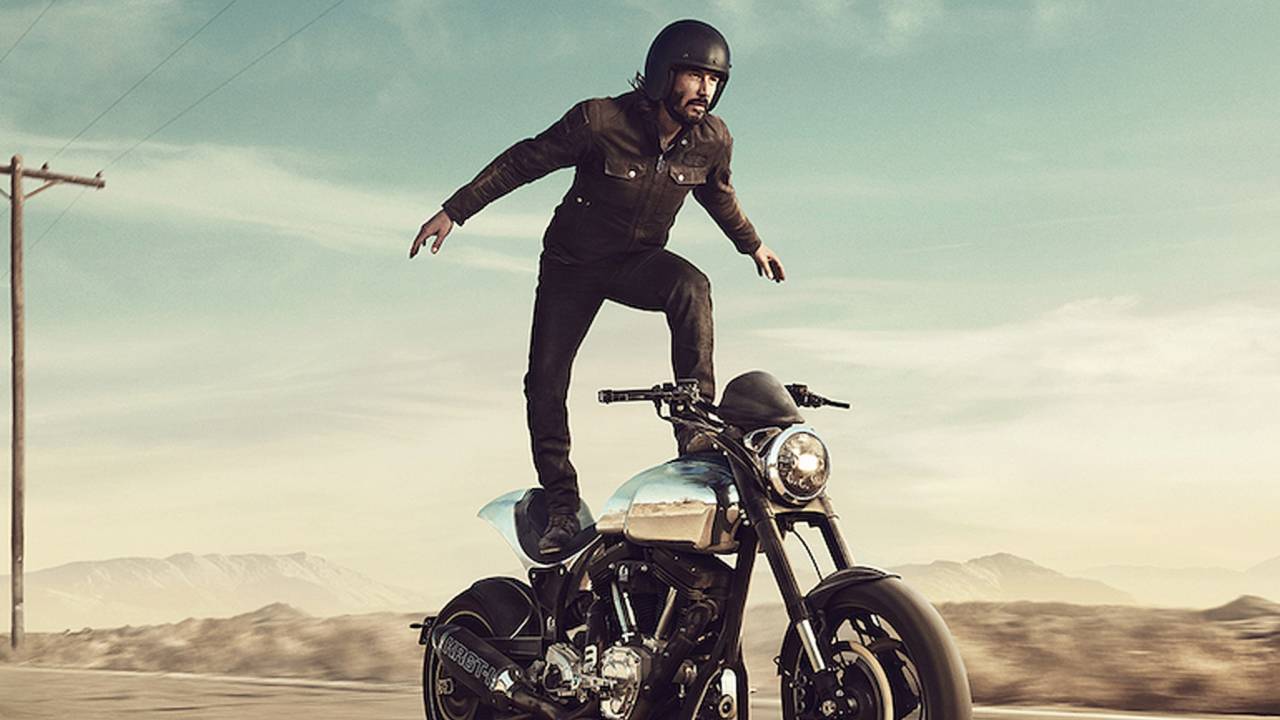 How Keanu Reeves both did and did not perform his own stunts in last weekend’s Super Bowl commercial atop one of his Arch Motorcycles machines.

Reeves performs own stunts in Super Bowl commercial, sort of…

Last week we told you about Squarespace’s new marketing campaign starring Keanu Reeves and one of his $80,000 Arch bikes. The website generator released two different commercials featuring the lead actor of the new John Wick franchise, but during last Sunday’s Super Bowl game, Sqaurespace debuted a third Keanu-centric advert in which Reeves can be seen standing atop one of Arch’s KRGT-1 motorcycles.

Keanu Reeves has (somewhat) famously performed many of his own stunts since rising to prominence in the 90’s, opting out of using a stunt double for sequences in 1994’s Speed, as well as doing his own fight scenes in much of The Matrix series and the increasingly impressively choreographed John Wick movies. So it didn’t come as much of a surprise to hear the co-star of the Bill and Ted franchise performed his own stunts in the recent Squarespace ad that aired during last Sunday’s Super Bowl. Well, sort of.

While it is in fact the 53-year-old actor standing atop one of his marque’s high-end cruisers while traversing a road in the Southern California desert at 45 miles per hour, an elaborate custom-made harness and rig system was utilized to ensure Reeves and his bike both made it home in one piece. Said rig - which was built by Reset, Squarespace’s production company partner - had to be designed and constructed specifically for the shoot, allowing the expensive scoot to actually travel up the tarmac at speed while a helicopter was used to capture the director’s desired shots from a surprisingly close distance, all in an effort to churn out a 30-second clip.

“Most people would probably have a stunt double do this, or superimpose his face onto a stunt double to try and make it look real. I think it was all our opinion that in order for this to look genuine, he would need to do the stunt himself,” explained David Lee, chief creative officer at Squarespace.

The practice of standing - or “surfing” - on top of a moving motorcycle is largely credited to famed builder and stunt rider, Lawrence DeSmedt, better known as “Indian Larry”. In August of 2004 at the age of 55, Indian Larry was performing his signature stunt, (or rather one of his many) when his front-wheel began to wobble, sadly resulting in him falling and hitting his head - eventually killing him. Larry had performed the stunt countless times in the past and had experienced front-end wobbling before but previously had been able to hop down and regain control of the machine.

So with that in mind, there was absolutely no way whatsoever that Reeves would be allowed to actually perform the stunt for the ad sans safety equipment. The script also called for dialogue from the Wyld Stallyns member so getting the footage while genuinely performing the stunt was already out of the question. Not to mention the astronomical insurance and liability nightmare this would require.

Super Bowl LII marked the fifth consecutive year that Squarespace ran a commercial during the high-profile event, supposedly shelling out a cool $5-million for the 30-second spot. Squarespace has previously featured other Hollywood A-listers in its marketing, so when the company discovered Reeves had used its platform to generate Arch Motorcycle’s website and had been a customer since 2015, the decision to collaborate with Reeves and Arch was seemingly a natural one.

Since Sunday's ad, both "Keanu Reeves Motorcycle" and "Arch Motorcycle Price" have become popular google searches. While the half-minute ad is –as a whole– pretty goofy, it’s a net positive anytime motorcycles are thrust into the public eye and not perpetuating the “biker” stereotype. As obvious as it may sound, Squarespace’s commercial is sure to have reminded quite a few people out there that motorcycles exist and are f****** awesome. Carlos Ormazabal, the owner of The Foundry MC –a Spain-based customs shop– got into motorcycles after seeing Brad Pitt on TV, riding a Zero Engineering bike, prompting Ormazabal to then build his own bespoke machine after discovering ZE’s bikes are crazy expensive. Hopefully Keanu and his fancy $80K two-wheeler will inspire a few new folks to get on a motorcycle.