Don't let the gust get you down.

Naked bikes are awesome. It's amazing that they can perform almost as well as a sportbike, yet with a taller riding position and without aerodynamic aids. Some might say it's a more pure riding experience than being cocooned inside a fairing. The only issue is that you're out there in the open, and when the speed picks up, it can feel like you're riding into the exhaust of a fighter jet. MotoKari has some tips for getting used to this sensation.

One thing MotoKari doesn't mention, but I think is important to understand, is that wind drag increases as the square of your speed. In other words, if you double your speed from 30 to 60 MPH, you experience four times as much wind resistance. That's why riding on the highway can feel much more difficult than riding in town. It's also why 80 MPH can feel so much worse than 70, even though it's not that much faster. So if you feel like highways are so much more difficult than riding in town, you're not crazy. You're correct.

Practice—You Get Used To It

When we start riding, we're not used to feeling the air hit our bodies as we move through it. Even convertible cars have windshields to protect us. With practice, though, you get more accustomed to it. You begin to understand how the wind will try to move you and the bike around, particularly while passing, or being passed by, trucks. I started at a relatively low speed I was comfortable with (much to the chagrin of traffic around me) and slowly worked my way up, pushing the limits of my comfort zone but not breaking out of it.

Again, this is difficult at first, because holding on for dear life is your natural reaction when you feel like you're about to get blown off the bike. In truth, though, tensing up will prevent you and the bike from being able to react to wind gusts effectively. It will also tire you out much more quickly.

Use Your Legs To Hold On

One key to getting a grip on your bike is to squeeze your legs against the gas tank and hold it with your knees. This works much better than using your hands. Your legs are much stronger and can grip tighter. You're also gripping a part of the bike that doesn't move, unlike the handlebars. Besides, your hands still have to control the throttle, clutch, and brakes. They can't do that if they're hanging on tightly.

There are rubber pads that you can stick to the sides of your gas tank, right where your knees will grab onto it. These will make it much more comfortable than squeezing bare metal. They also give you much better control over the bike.

Scoot Back And Tuck In

Another way to adapt to the wind at higher speeds is to make yourself smaller. It's more difficult to adopt an aerodynamic tuck on a naked bike than a sportbike, but it's still possible. It may or may not work for you, depending on the size and shape of your body and the ergonomics of your bike.

Let The Car Ahead Of You Block The Wind

When MotoKari followed her husband's car on a long highway slog to a track day, she found it much easier to ride behind him instead of out in the open. She's not advocating tailgating, which is dangerous, but following someone can help. I personally haven't noticed much difference except behind big trucks, which create a turbulent wake that is more difficult to ride in, not easier.

This isn't one of MotoKari's tips, but my own. You're going to feel the wind much less in a full-face helmet and proper riding gear than you will in a half-helmet (or no helmet at all), a t-shirt, and jeans. Just saying.

If A Naked Bike Doesn't Work, Don't Ride One

There are so many amazing motorcycles out there today that if none of these tips help, you can add wind protection to your bike, or switch to a bike with a fairing. I enjoyed the removable windshield my Honda Shadow came with because I could remove it on days I wanted to feel the wind, but clip it on when I knew I'd be hitting the highway. If a Yamaha MT-09 just doesn't work for you, consider a Tracer 900. It has the same great engine, but also a windshield and fairing. 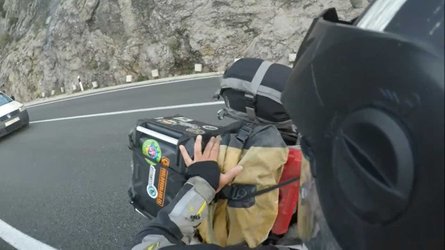 This Rider Found Out Why Croatian Winds Are No Joke
⠀ 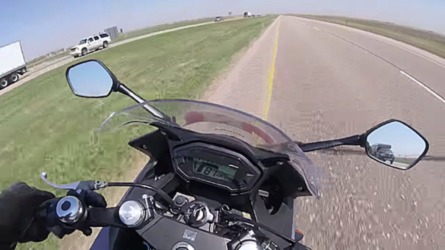